Pattabhirama means something in Hinduism, Sanskrit. If you want to know the exact meaning, history, etymology or English translation of this term then check out the descriptions on this page. Add your comment or reference to a book if you want to contribute to this summary article. 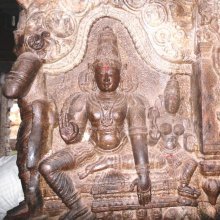 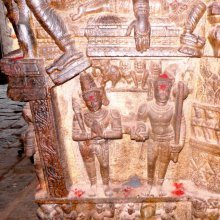 [«previous (P) next»] — Pattabhirama in Vastushastra glossary
Source: Shodhganga: Temples of Salem region Up to 1336 AD

Surrounding them are the standing sculptures of Lakṣmaṇa and Bharata who are shown as holding the chatra and cāmara. Śatrughna stands in añjalimudra. Hanumān is shown as seated near the feet of Rāma. He is also in añjalimudra. Inside the sanctum itself sculptures of Sugrīva, Jāmbavān, Aṅgada and Vibhīṣaṇa are kept, suggesting the concept of Paṭṭābhirāma. They are all standing in samabhaṅga and in añjalimudra. The faces of Sugrīva and Aṅgada are carved as monkey faces, while Jāmbavān has the face of a bear, Vibhīṣaṇa is shown with a mustache, probably suggesting that he is a king.

[«previous (P) next»] — Pattabhirama in Shilpashastra glossary
Source: Shodhganga: The significance of the mūla-beras (śilpa)

Śrī Paṭṭābhirāma is the name of a deity depicted at the Ranganathaswamy Temple in Srirangam (Śrī Raṅgam), which represents a sacred place for the worship of Viṣṇu.—Here the figures of Sītā, Rāma, Lakṣmaṇa, and Hanumān are found. Rāma and Lakṣmaṇa are found in samapāda-sthānaka with two hands each. The right hand holds the arrow in kaṭaka-hasta and the left hand holds the bow in the dhanur-hasta. Sītā is found to the right of Rāma in samapāda-sthānaka with two hands. The right hand is held in dolā-hasta and the left hand is in kaṭaka-hasta. Hanumān is found in samapāda-sthānaka with hands held in añjali. The sanctums of Śrīnīvāsa Perumāl and Śrī Bhōja Rāma are seen as the devotee proceeds and there is the way out.

Search found 2 books and stories containing Pattabhirama, Paṭṭābhirāma; (plurals include: Pattabhiramas, Paṭṭābhirāmas). You can also click to the full overview containing English textual excerpts. Below are direct links for the most relevant articles: