Grahamatrika means something in Buddhism, Pali, Hinduism, Sanskrit. If you want to know the exact meaning, history, etymology or English translation of this term then check out the descriptions on this page. Add your comment or reference to a book if you want to contribute to this summary article.

The Sanskrit term Grahamātṛkā can be transliterated into English as Grahamatrka or Grahamatrika, using the IAST transliteration scheme (?). 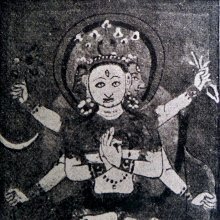 Grahamātṛkā (ग्रहमातृका) refers to one of the various emanations of Vairocana, as mentioned in the 12th century Dharmakośasaṃgraha (a work dealing with iconography of Buddhist deities) written by Amṛtānanda.—Her Mudrā is the dharmacakra; her Āsana is the vajraparyahka; she has three faces and six arms.

Grahamātṛkā has been described in the Dharmakośasaṃgraha in the following words:

“Grahamātṛkā has three faces of white, yellow and red colour, and six-arms, displaying the dharmacakra-mudrā (in the principal pair of hands) and carrying the vajra and the arrow in the two right hands, and in the two left the lotus and the bow She sits in the vajrāsana on a lotus of a thousand petals”

Grahamātṛkā (ग्रहमातृका) refers to the last of “seven days” (saptavāra) classified as a dhāraṇī according to a 17th-century Sanskrit manuscript from Nepal .—This collection associates each dhāraṇī with a specific day of the week, a tradition going back to at least the sixteenth century in Nepal.