Mandhata means something in Buddhism, Pali, Hinduism, Sanskrit, Marathi. If you want to know the exact meaning, history, etymology or English translation of this term then check out the descriptions on this page. Add your comment or reference to a book if you want to contribute to this summary article. 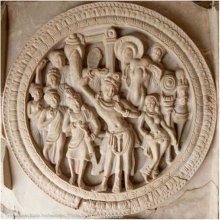 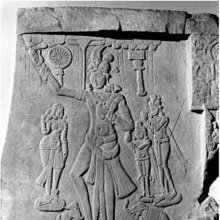 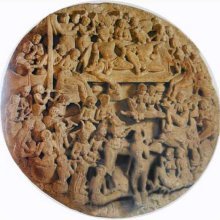 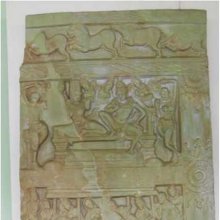 Māndhātā (मान्धाता):—Son of Yuvanāśva (son of Senajit). He was born from the lower right side of King Yuvanāśva's abdomen, after the king drank sanctified water meant for his wife (during a sacrifice). Because Rāvaṇa and other bandits feared him, he was also called Trasaddasyu. He had three sons by his wife Bindumatī (daughter of Śaśabindu), named Purukutsa, Ambarīṣa, and Mucukunda. These three brothers had fifty sisters, who all accepted the great sage Saubhari as their husband. (see Bhāgavata Purāṇa 9.6.33-34,38)

Māndhātā (मान्धाता).—A King of pre-eminence in the dynasty of Ikṣvāku. Genealogy. Descending in order from Viṣṇu were born—Brahmā—Marīci—Kaśyapa—Vivasvān—Ikṣvāku—Vikukṣi—Śaśāda—Purañjaya—Kakutstha—Anenas—Pṛthulāśva—Prasenajit—Yuvanāśva—Māndhātā. (See full article at Story of Māndhātā from the Puranic encyclopaedia by Vettam Mani)

Māndhāta (मान्धात).—(Māndhātri)—a son of Yuvanāśva, was born of him by splitting open the right side of his stomach; to the crying child Indra gave his first finger to suckle and called him Trasadasyu (s.v.) as he was a terror to the Dasyus; celebrated as a great emperor by the Paurāṇikas, having lust for more territory; married (Bindumatī) Caitrarathī, daughter of Śaśabindu, (Satabindu, Viṣṇu-purāṇa); had three sons, Purukusta, Ambarīṣa, and Mucukunda besides fifty daughters, all of whom were married to Saubhari;1 he built for them crystal palaces; gave them all comforts and himself lived constantly with each of them by his yogic powers; they gave birth to 150 sons and Māndhāta visited them after a long time and found them happy; was blessed by the sage and returned home; a Kṣatropetadvija;2 an incarnation of Viṣṇu as human being with Uthathya, in the 15th Treta (with Uttankapurohita in the 15th Tretāyuga, Matsya-purāṇa);3 an Angirasa and mantrakṛt;4 worshipped Hari as yajña, knew the yoga power of Hari and got over his māyā;5 a great conquering monarch; a popular king, a yajva, of good character;6 became a Brahmana;7 Tattya was his purohita.8

One of the Hands of Famous Emperors.—For the Lords of the Earth Mandhātā and Marutvān, Mukula, Sūci and Muṣṭi hands and the Ardha-patāka twisted upwards touching the body, these four hands are used in order.

According to Viśvanātha Cakravartī Ṭhākura, Māndhātā was the king of Mathurā, and Saubhari Ṛṣi was engaged in austerity while submerged deep within the River Yamunā.

Mandhata is a king of the Solar dynasty, the son of Yuvanashva, and an ancestor of Rama. (Note: There is an alternate interpreation that makes Mandhata the other name of Yuvanashva). His son is Susandhi.

He had the seven Jewels of a Cakka vatti and his four Supernatural Powers. When he clenched his left hand and touched it with his right, a shower of the seven kinds of jewels fell knee deep from the sky. For eighty four thousand years he was a prince, for eighty four thousand a viceroy, and for eighty four thousand more a king. His life span was an asankheyya. But he grew discontented, and, at the suggestion of his ministers, visited the deva world. First he went to the Catummaharajika world, where he ruled; but still unsatisfied, he went to Tavatimsa. There Sakka welcomed him and gave him half his kingdom. Mandhata ruled there during the lifetime of thirty six Sakkas, each Sakkas life lasting for thirty six million years and sixty times one hundred thousand. As time went on, Mandhatas craving increased; he wished to kill Sakka and gain the whole kingdom. Because of his greed his power waned, and he fell from heaven into his park. The gardener announced his arrival to the royal family, and they provided a resting place for him and there he lay dying. When asked for a message for his people, he wished them to know how even he, in spite of his great pomp and power, had to die (J.ii.311ff.; DA.ii.481f.; MA.i.182f.; cp. Dvy.210ff).

When Mandhata went to the deva world he was accompanied by inhabitants of all the four continents. After his return to earth, however, the Cakkaratana, stuck fast in the ground, and the others could not return to their homes. They thereupon begged for the intervention of the minister (Parinayaka), who was carrying on the government with Mandhatas shoes on the throne. He gave them lands in Jambudipa. There those who came from Pubba Videha called their land Videharattha; those from Apara goyana called it Aparantajanapada, and those from Uttarakuru dwelt in what afterwards came to be known as Kururattha. DA.ii.482; MA.i.183f.

Māndhātā (मान्धाता) is the name of an ancient Bodhisattva and Cakravartin king, according to the Nārāyaṇaparipṛcchā.—The setting of this scripture is Mount Svarṇaśṛṅga, the mansion of Vaiśravaṇa, where Nārāyaṇa requests help from the Buddha upon defeat by the Asuras, much like the Dhvajāgrakeyūradhāraṇī. The lord tells him that earlier, during the reign of King Ratnaśrī of Magadha, there lived Sarveśvara Tathāgata, from whom the Bhagavān learned the Mahāmāyāvijayavāhinī spell. For hundreds of thousands of years that king ruled righteously by the power of this dhāraṇī. In his next existence he was born as Māndhātā, a Bodhisattva and Cakravartin king, who practiced charity for sixty-four thousand kalpas and became a Buddha. [...]