Maharashtra means something in Hinduism, Sanskrit, Jainism, Prakrit, the history of ancient India, Marathi, Hindi. If you want to know the exact meaning, history, etymology or English translation of this term then check out the descriptions on this page. Add your comment or reference to a book if you want to contribute to this summary article.

The Sanskrit term Mahārāṣṭra can be transliterated into English as Maharastra or Maharashtra, using the IAST transliteration scheme (?). 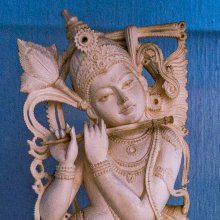 Maharastra is the name of an ancient city mentioned by the author of the Kavikankan’s Chandikāvya pp. 195-202.—Accordingly, after the performance of the usual ceremonies before sailing, the merchant Dhanapati passed the following places: [...]—all by the side of the Ganges. Then he reached the very celebrated inland port of Bengal known as Saptagram near the Tribeni. The poet here incidentally praised this port and gave it a superiour place among the following ports and places: [e.g., Maharastra, etc...]. According to the poet the merchants of the above places visit Saptagram but the merchants of Saptagram do never visit those ports and places.

Mahārāṣṭra (महाराष्ट्र) is the name a locality mentioned in Rājaśekhara’s 10th-century Kāvyamīmāṃsā.—In ancient times it was called by Daṇdakāranya. It is the Mārāthā country or the country watered by the upper Godāvarī or the land lying between this river and the Kṛṣṇā.

Mahārāṣṭra (महाराष्ट्र) is the name of an ancient region, coming from there represents an undesirable characteristic of an Ācārya, according to the 9th-century Hayaśīrṣa-pañcarātra Ādikāṇḍa chapter 3.—The Lord said:—“I will tell you about the Sthāpakas endowed with perverse qualities. He should not construct a temple with those who are avoided in this Tantra. [...] Nor originating in Kāmarūpa or Kaliṅga, or Kāñcī, Kāśmīra or Kośala, nor one having bad behavior, bad company or come from Mahārāṣṭra. [...] A god enshrined by any of these named above (viz., mahārāṣṭra), is in no manner a giver of fruit. If a building for Viṣṇu is made anywhere by these excluded types (viz., mahārāṣṭra) then that temple will not give rise to enjoyment and liberation and will yield no reward, of this there is no doubt”.

Maharashtra refers to a state in central India.—In Maharashtra there are eight revered temples dedicated to Vinayaka (eight images of Ganapati). Among the many holy abodes of God Ganesha, these eight places are considered especially important and beneficial for fulfilling the desires of his devotees. Temples “Ashta Vinayaka” are located around Pune. Just as the twelve Jyotirlingas of Shiva and fifty-two Shakti Pithis Devi are considered sacred, so the eight self-manifested abodes of Ganesha are considered sacred.

Mahārāṣṭra (महाराष्ट्र) is the name of a country classified as both Hādi and Kādi (two types of Tantrik division), according to the 13th century Sammoha-tantra (fol. 7).—There are ample evidences to prove that the zone of heterodox Tantras went far beyond the natural limits of India. [...] The zones in the Sammoha-tantra [viz., Mahārāṣṭra] are here fixed according to two different Tantrik modes, known as Kādi and Hādi.

Mahārāṣṭra (महाराष्ट्र) is the name of an ancient country, according to chapter 2.4 [ajitanātha-caritra] of Hemacandra’s 11th century Triṣaṣṭiśalākāpuruṣacaritra (“lives of the 63 illustrious persons”): a Sanskrit epic poem narrating the history and legends of sixty-three important persons in Jainism.

Accordingly:—“'Then the King set out following the path of the cakra-jewel to the west, obscuring the sun by the dust of the army. [...]; making the Mahārāṣṭras abandon their realms, like beggars in rags; [...] the King gradually arrived at the shore of the western ocean. After he had established camp, concentrating on Prabhāsa, observing a three days’ fast, he began pauṣadha in the pauṣadha-house. [...]”.

Mahārāṣṭra (महाराष्ट्र) is the name of a country included within Dakṣiṇapatha which was situated to the south of the Vindhyas according to the Yādavaprakāśa. Dakṣiṇāpatha is a place-name ending is patha mentioned in the Gupta inscriptions. The Gupta empire (r. 3rd-century CE), founded by Śrī Gupta, covered much of ancient India and embraced the Dharmic religions such as Hinduism, Buddhism and Jainism.

mahārāṣṭra (महाराष्ट्र).—n m (S The great country.) The country of the Maraṭhas; bounded on the north by the Narmada river, on the south and east by the Carnatic and Telinga, and on the west by the ocean. 2 Used as a Relating to it--people, language, customs.

Mahārāṣṭra (महाराष्ट्र).—'the great kingdom', Name of a country in the west of India, the country of the Marāṭhās.

Mahārāṣṭra is a Sanskrit compound consisting of the terms mahā and rāṣṭra (राष्ट्र).

(-ṣṭraṃ) A country in the west of India, that of the original Mahrattas. f. (-ṣṭrī) A dialect, Mahratta. E. mahā and rāṣṭra kingdom.

Mahārāṣṭra (महाराष्ट्र).—[masculine] [plural] the Mahrattas; [feminine] ī the language of the [Middle]

Mahārāṣṭra (महाराष्ट्र) in the Sanskrit language is related to the Prakrit word: Marahaṭṭha.

Mahārāṣṭra (महाराष्ट्र):—(nm) the south-western Indian state comprising the marathi:-speaking areas of the country; ~[rāṣṭrīya] belonging, pertaining or relating to Maharashtra.

2) [noun] name of a state in Western India, having Mumbai as its capital.

Part 5.2 - Speech and Languages of Kavi (poets) < [Chapter 5 - Analyasis and Interpretations of the Kāvyamīmāṃsā]

Centres of the Avadhūta sect in India < [Introduction]

The saints and the Monks of Dattātreya Cult < [Introduction]