Kartari means something in Buddhism, Pali, Hinduism, Sanskrit, Marathi. If you want to know the exact meaning, history, etymology or English translation of this term then check out the descriptions on this page. Add your comment or reference to a book if you want to contribute to this summary article. 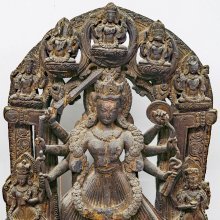 Kartarī (कर्तरी) refers to one of the five characteristics of the hand (upahasta) according to the Nāṭyaśāstra chapter 33. Accordingly, “the movement of the forefinger and the thumb of the two hands by letting them fall one after another is called Kartarī”.

Kartari refers to “scissors”, representing one of the several “attributes” (āyudha) or “accessories” of a detiy commonly seen depicted in Hindu iconography, defined according to texts dealing with śilpa (arts and crafs), known as śilpaśāstras.—The śilpa texts have classified the various accessories under the broad heading of āyudha or karuvi (implement), including even flowers, animals, and musical instruments. Some of the work tools held in the hands of deities are, for example, Kartari.

1) Kartari (कर्तरि) (Cf. Pīṭha) refers to a “knife”, according to the Niḥśvāsatattvasaṃhitā, one of the most ancient of extant Śaiva Tantras.—Accordingly, “Having offered a seat (pīṭha), umbrella, turban and knife [i.e., kartari], (one should say): ‘You are the teacher, Śiva's equal; exercise (your) grace in the world’.”.

2) Kartarī (कर्तरी) refers to a “dagger” and represents one of the attributes of Svacchanda, according to the Śrīmatottara-tantra, an expansion of the Kubjikāmatatantra: the earliest popular and most authoritative Tantra of the Kubjikā cult. Accordingly, “O goddess, Svacchanda is in the middle, within the abode of the triangle. Very powerful, he has five faces with three times five flaming eyes. [...] O fair lady, my attributes—trident, dagger [i.e., kartarī], sword, the king of the snakes, and rosary—adorn the right (arms). O beloved, a skull, double-headed drum, javelin, noose and goad—(these) are my divine, brilliant and very auspicious weapons that (are held) in the left (hands). The king of snakes (hangs) on the shoulder and a garland of skulls hangs (from the neck). There is a necklace of scorpions around the throat and the ears are adorned with snakes. [...]”.

Kartarī (कर्तरी, “chopper”).—The chopper is especially associated with Vajrayoginī in the Guhyasamayasādhanamālā and symbolizes the “choppig off” of defilements. It is mentioned, for example, in the twenty-one-verse stotra (verse 42.8): “Homage to you, Vajrayoginī! You who hold a skull bowl and staff on your left and a chopper on your right; who hold empitness and compassion.”

Kartarī (कर्तरी).—[feminine] the same; phala [neuter] blade of a knife.

3) [v.s. ...] the part of an arrow to which the feathers are attached, [cf. Lexicographers, esp. such as amarasiṃha, halāyudha, hemacandra, etc.]

1) [noun] an instrument for cutting fabric, paper, hair, etc., having two pivoted blades with finger and thumb holes in the handles, operating by closing on the material to be cut; a pair of scissors.

3) [noun] the back feathered end of an arrow.

Search found 11 books and stories containing Kartari, Kartarī; (plurals include: Kartaris, Kartarīs). You can also click to the full overview containing English textual excerpts. Below are direct links for the most relevant articles:

Chapter 4.1d - Adveṣa (Non-antipathy) < [Chapter 4 - The Eight Yogadṛṣṭis and the nature of a Liberated Soul]

Chapter 351 - Perfected forms of inflection in the nouns