Kalaratri means something in Hinduism, Sanskrit, Jainism, Prakrit, Marathi. If you want to know the exact meaning, history, etymology or English translation of this term then check out the descriptions on this page. Add your comment or reference to a book if you want to contribute to this summary article. 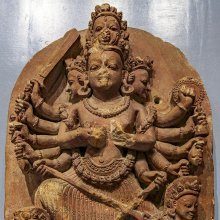 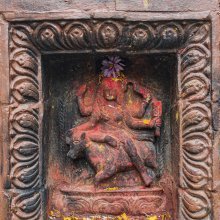 Kālarātri (कालरात्रि, “Dark Night”):—One of the names of Mahākālī (tamas-form of Mahādevī). Mahākālī is one of the three primary forms of Devī. Not to be confused with Kālī, she is a more powerful cosmic aspect (vyaṣṭi) of Devi and represents the guṇa (universal energy) named tamas. For reference, see the Devī Māhātmya, a Sanskrit work from the 5th century, incorporated into the Mārkaṇḍeya-Purāṇa.

The night of Dhūmāvatī is Kālarātri (कालरात्रि, “the Night-of-Death”) — during the 4 months of the monsoon no public ritual can be performed, there are no pilgrimages, no festivals, no marriages, no initiation. At the end of the rainy period the rule of light returns and the festival of lights (Dīpāvalī) takes place.

Kālarātrī (कालरात्री) refers to one of the nine Navadurgā which literally means the “nine forms of Goddess Durgā”, and constitute, according to Vedic scriptures, the manifestation of Durgā in Her nine different aspects. [...] Each goddess [viz., Kālarātrī] has a different form and a special significance.

Kālarātri (कालरात्रि, “the night of time”) is a name of the Goddess Raudrī referring to her terrific form engaged in destruction, according to the Varāhapurāṇa chapter 96. Raudrī is the form of Trikalā having a black body representing the energy of Maheśvara (Śiva). Trikalā is the name of a Goddess born from the combined looks of Brahmā, Viṣṇu and Maheśvara (Śiva).

Kālarātri (कालरात्रि).—The Devatā presiding over the night on the eve of death. The fierce aspect of the Devatā is described in the Mahābhārata as follows:—

Coal-black in colour, with swollen mouth and eyes and wearing red garlands and clothings—thus appeared the woman (Devatā) presiding over the death-night. With the fierce cord in her hand she drags away the souls of the dead. (Sauptika Parva, Chapter 9).

1) Kālarātri (कालरात्रि) is the name of a Brāhman woman who was expert in the magic power of witches, such as flying through the air, according to the Kathāsaritsāgara, chapter 20.

2) Kālarātri (कालरात्रि) is the name of the southern opening of mount Kailāsa or the deity thereof, as mentioned in the Kathāsaritsāgara, chapter 109. Accordingly, “... when Śiva had been thus supplicated by the mountain [Kailāsa], he placed in the cave, as guards, elephants of the quarters, mighty basilisks, and Guhyakas; and at its southern opening Kālarātri, the invincible Caṇḍikā”.

Also, as Dhanavatī and Devamāya said to Naravāhanadatta: “your Majesty, Kālarātri is always near this opening. She was originally created by Viṣṇu, when the sea was churned for the nectar, in order that she might tear in pieces the chiefs of the Dānavas, who wished to steal that heavenly drink. And now she has been placed here by Śiva to guard this cave, in order that none may pass it except those beings, like yourself, of whom we spoke before. You are our emperor and you have obtained the jewels, and have passed this cave; so, in order to gain the victory, you must worship this goddess, who is a meet object of worship”.

The Kathāsaritsāgara (‘ocean of streams of story’), mentioning Kālarātri, is a famous Sanskrit epic story revolving around prince Naravāhanadatta and his quest to become the emperor of the vidyādharas (celestial beings). The work is said to have been an adaptation of Guṇāḍhya’s Bṛhatkathā consisting of 100,000 verses, which in turn is part of a larger work containing 700,000 verses.

Kalarātri (कलरात्रि) refers to a type of snake-bite that “resembles foot of a bird with sandal wood smell”, according to the 20th century Prayogasamuccaya (one of the most popular and widely practised book in toxicology in Malayalam).—[...] The author has given a detailed description of types of bite mark and the corresponding causes and prognosis... If vital parts in body such as forehead, cheeks, nose, ears, temples, palmar surface of hands, nipples, cardiac area, axillary area, umbilicus, groins and thighs are bitten, the chance of survival becomes doubtful. Four types of poisonous teeth and their prognosis are mentioned, which are: [viz., Kalarātri, ‘bite resembles foot of a bird with sandal wood smell’ ...]

Kālarātri (कालरात्रि):—The night of all destroying time, night of destruction, the end of the world, the night of man’s death. this context is explained while discribing the ill effect of sleep, I, e excessive, untimely and negatively take away the happiness and life like other death night.

Kālarātrī (कालरात्री) is the name of a Yoginī mentioned in various Jaina manuscripts, often being part of a list of sixty-four such deities. How the cult of the Tantrik Yoginīs originated among the vegetarian Jainas is unknown. The Yoginīs (viz., Kālarātrī) are known as attendants on Śiva or Pārvatī. But in the case of Jainism, we may suppose, as seen before that they are subordinates to Kṣetrapāla, the chief of the Bhairavas.

kālarātri (कालरात्रि).—m S The night occurring on the 7th day of the 7th month of every 77th year. The popular understanding of this word, and of its derivative kālarātra f is, according to some, the 8th of the bright half of āśvina, according to others, the 8th of the dark half of śrāvaṇa, the birthnight of kālī. 2 The last night of a kalpa. 3 A dark (not moonlit) night gen.

3) the Amāvasyā on which lamps are lighted (in the Divali holidays).

(-triḥ) 1. A particular night, one which occurs on the 7th day of the 7th month of every 77th years; after such a period of life, a man is exempt from attention to the usual ordinances. 2. The last night of a Kalpa 3. A dark night. 4. A form of Sakti or Durga. E. kāla black, time, and rātri a night: see bhīmarathī.

4) Kālarātri (कालरात्रि):—[=kāla-rātri] [from kāla] 2. kāla-rātri f. the night of all-destroying time, night of destruction at the end of the world (often personified and identified with Durgā or with one of her Śaktis), [Mahābhārata; Rāmāyaṇa] etc.

6) [v.s. ...] a particular night in the life of a man (on the seventh day of the seventh month of the seventy-seventh year, after which period a man is exempt from attention to the usual ordinances), [cf. Lexicographers, esp. such as amarasiṃha, halāyudha, hemacandra, etc.]

8) Kālarātrī (कालरात्री):—[=kāla-rātrī] [from kāla] b f. the night of all-destroying time, night of destruction at the end of the world (often personified and identified with Durgā or with one of her Śaktis), [Mahābhārata; Rāmāyaṇa] etc.

10) [v.s. ...] a particular night in the life of a man (on the seventh day of the seventh month of the seventy-seventh year, after which period a man is exempt from attention to the usual ordinances), [cf. Lexicographers, esp. such as amarasiṃha, halāyudha, hemacandra, etc.]

1) [noun] a night that is absolutely dark.

2) [noun] the night of all-destroying time; the time of dissolution of the universe 3) a formidable form of Goddess Pārvati.

1) [noun] a night that is absolutely dark.

2) [noun] the night of all-destroying time; the time of dissolution of the universe.

The motif of overhearing conversations < [Notes]