Durvasa means something in Hinduism, Sanskrit, Marathi. If you want to know the exact meaning, history, etymology or English translation of this term then check out the descriptions on this page. Add your comment or reference to a book if you want to contribute to this summary article. 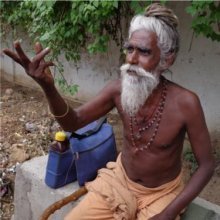 Durvāsa (दुर्वास) refers to one of the eighteen teachers of Āgama digests (paddhati) according to a theory where the sacred knowledge emanated from Śiva is said to have taught by Nandin to Sanaka, Sanātana, Sanandana and Sanatkumāra. Out of the four mutts established by them on the slopes of Himalayas, other eighteen mutts are established by Āgamic seers (e.g., Durvāsa), who authored the manuals named after their respective founders. The śaivāgama digests are termed as paddhati: manuals compiled by the teachers who have condensed the subject matter from the śloka-based Mūlāgamasand and presented them in the form of prayoga.

1a) Durvāsa (दुर्वास).—A son of Atri and an younger brother of Dattātreya;1 an aṃśa of Śiva;2 appeared before Ambarīṣa who was about to break his dvādasi fast; agreed to accept his hospitality, went to the river for bath and tarried there; finding the muhūrta for pāraṇa (break-fast) drawing to a close, the king broke his fast with some water. Coming to know of this on his return, the sage produced a flaming spirit to attack him. But Hari's cakra burnt it down and turned towards the sage, who ran for succour to Brahmā, Śiva and Viṣṇu. All of them were unable to help; but Hari advised him to meet Ambarīṣa and apologise to him.3 This he did and was set at liberty. After partaking the meals with him, he returned to Brahmaloka;4 blessed Pṛtha with secret mantras to summon gods.5 Through him Duryodhana planned to destroy the Pāṇḍavas by inciting him to go to them and ask for a feast. But Kṛṣṇa protected them on the occasion.6 In the course of his sojourn he met a Vidyādhara maid with a garland given to her by the Devī; took it from her and presented it to Indra who put it on his elephant, who in turn threw it on the ground and trampled upon it. Enraged at this, the sage cursed him to be lost to all fortune.7

1c) One of the Sages who left for Piṇḍāraka.*

Durvāsa (दुर्वास): An ancient sage known for his anger who visited the Kauravas. Duryodhana asked him to visit his cousins, the Pandavas, hoping that they would incur his wrath.

durvāsa (दुर्वास).—m (S Proper name of a saint. He is celebrated as a great eater.) A term for a glutton.

durvāsa (दुर्वास).—m A term for a glutton. A sage in Hindu Mythology.

Durvasa (दुर्वस).—a. difficult to be resided in.

Durvasa is a Sanskrit compound consisting of the terms dur and vasa (वस).

2) [noun] (fig.) an object, behaviour, incident, etc. that helps to solve a problem or mystery; a clue.

Verse 3.2.335 < [Chapter 2 - Description of the Lord’s Travel Through Bhuvaneśvara and Other Placesto Jagannātha Purī]