Udayana means something in Buddhism, Pali, Hinduism, Sanskrit, Jainism, Prakrit. If you want to know the exact meaning, history, etymology or English translation of this term then check out the descriptions on this page. Add your comment or reference to a book if you want to contribute to this summary article. 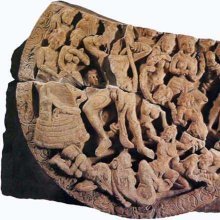 Udayana (उदयन) is the name of the King of Vatsa, according to the Kathāsaritsāgara, chapter 9. He was born to Mṛgāvatī (the wife of King Sahasrānīka) while she was taking refuge at the hermitage of Jamadagni. Accordingly,

“And some days after the blameless one (Mṛgāvatī) gave birth to a charmingly beautiful son... At that moment a voice was heard from heaven: ‘An august king of great renown has been born, Udayana by name, and his son shall be monarch of all the Vidyādharas.’”

The Kathāsaritsāgara (‘ocean of streams of story’), mentioning Udayana, is a famous Sanskrit epic story revolving around prince Naravāhanadatta and his quest to become the emperor of the vidyādharas (celestial beings). The work is said to have been an adaptation of Guṇāḍhya’s Bṛhatkathā consisting of 100,000 verses, which in turn is part of a larger work containing 700,000 verses.

Udayaṇa (उदयण) (= Udāyaṇa) is the name of an ancient musician, as mentioned in the Vividhatīrthakalpa by Jinaprabhasūri (13th century A.D.): an ancient text devoted to various Jaina holy places (tīrthas).—Accordingly, “King Pajjoa of Ujjenī wonders which music master is suitable for his daughter Vasavadattā, accomplished in all other arts. His minister advises him Udāyana, the best of musicians. [...] But how to succeed in bringing the son of an enemy king? He does it by trickery. The two young people fall in love with each other and flee to Kauśāmbī. The king, at first furious, ends up accepting their marriage”.

[«previous (U) next»] — Udayana in Nyaya glossary
Source: Shodhganga: A study of Nyāya-vaiśeṣika categories

Udayana (उदयन) or Udayanācārya, also known as Udayakara was one of the greatest Naiyāyikas. He flourished after Vācaspati Miśra. Udayana was the last of Naiyāyikas who belong to the old school of Nyāya (Prācīnanyāya). After that he flourished the Navya-Nyāya school. It is also said that Udayana prepared the way for emergence of Navya-Nyāya. He wrote a sub-commentary named Nyāyavārtikatātparyapariśūddhi on Vācaspati’s Nyāyavārtikatātparyaṭīkā. He refuted the criticisms of the Buddhist logicians against Vācaspati Miśra in this work.

Udayana also wrote some independent works on Nyāya system. In his Nyāya-kusumāñjalī, he has forwarded arguments to prove the existence of God. Another important Nyāya work of Udayana is Ātmatattvaviveka. In this work he tries to establish the Nyāya-doctrine of Soul against the attack of Buddhists. The time of Udayana is supposed to be the latter half of the 11th century A.D.

[«previous (U) next»] — Udayana in Vaisheshika glossary
Source: Shodhganga: A study of Nyāya-vaiśeṣika categories (vaisesika)

Udayana (उदयन) is the author of the Kiraṇāvalī: another important work on Praśastapāda-bhāṣya. Udayana was contemporary of Śrīdhara. Unlike Praśastapāda who omitted non-existence, Udayana maintains that non-existence is a well-established category. Udayana does not accept the view of the Sāṃkhya, the Vijñānavādins and the Bhāṭṭas about the concept of Mokṣa. He discusses in detail seven categories and four Pramāṇas. He gives arguments to prove the existence of God.

[«previous (U) next»] — Udayana in Shaivism glossary
Source: SOAS University of London: Protective Rites in the Netra Tantra

Udayana (उदयन) refers to the “rising” (of the sun), according to the Svacchanda-tantra.—Accordingly, [verse 4.8-13, while describing auspicious dreams]—“[The dreamer] crosses over the ocean and river. Likewise sunrise (bhāskara-udayana) and indeed blazing fire [are auspicious. Also auspicious is when the dreamer] sees planets, constellations, stars and the disk of the moon. [When the dreamer] ascends the palace or a turret of the palace, climbs a mountain top, tree, elephant, young animal, bull, horse, or man. [In auspicious dreams one] sees a chariot and also sees the siddhamantra, obtains the perfected oblation and sees the gods, etc. [...]”

[«previous (U) next»] — Udayana in Hinduism glossary
Source: WikiPedia: Hinduism

Udayana : Udayana was a prince of the Lunar race, and son of Sahasranika, who is the hero of a popular story. He was king of Vatsa, and is commonly called Vatsaraja. His capital was Kausambi. Also a name of Agastya.

1) Udayana (उदयन) is the name of a king that, out of attachment to female beauty (rūpasaṅga), cut off the hands and feet of five hundred Ṛṣis according to the 2nd century Mahāprajñāpāramitāśāstra (chapter XXVIII). Udayana (in Pāli Udena) was about to renew this act of cruelty in yet other circumstances: One day he discovered that his palace ladies had given Ānanda five hundred costly robes; fortunately, Ānanda was able to explain that gifts made to the community were never lost, and the king, satisfied with this explanation, in turn gave five hundred robes. Another day, walking in his park Udakavana, (cf. at the beginning of this note, the mountain Udakapada, mentioned in the Vibhāṣā), Udaka saw that his women had given their robes to the Bhikṣu Bhāradvāja. He questioned the monk about the good based on their generosity, but the monk remained silent. Angry, Udayana tried to have him eaten by red ants, but Piṇḍola vanished into the sky.

2) Udayana (उदयन) is the name of a king of olden times subdued by the Buddha mentioned in order to demonstrate the fearlessness of the Buddha according to the 2nd century Mahāprajñāpāramitāśāstra chapter XL.1.4. Accordingly, “a hundred thousand Che-tseu (Śākya) who all were great kings in Jambudvīpa, king Yeou-t’ien (Udayana), etc., all became his disciples”.

Note: After having been noted for his great cruelty (cf. above, p. 993F and note), Udayana, king of Kauśāmbhī, during a friendly visit to the disciple Piṇḍola Bhāradvāja, was converted and entered into the brotherhood of the upāsakas (Saṃyutta, IV, p. 110–113).

Udāyana (उदायन).—King Udāyana was a popular king of Sindhu-Sauvīra kingdom. The capital of this kingdom was Vītabhaya city, which was large, beautiful and prosperous in every way. Prabhāvatī was the queen of King Udāyana and Abhīcakumāra was their son. Udāyana’s nephew Keśīkumāra too used to live with him. King Udāyana had great faith in the words of Lord Mahāvīra. He was a 12-vows follower of Mahāvīra.

Udayana (उदयन) is the son of Mṛgāvatī and king Śatānīka from Kosambī, according to the Mṛgāvatīcaritra (dealing with the lives of Jain female heroes), which is included in the collection of manuscripts at the ‘Vincenzo Joppi’ library, collected by Luigi Pio Tessitori during his visit to Rajasthan between 1914 and 1919.—Accordingly, Mṛgāvatī was the wife of Śatānīka at Kosambī. During her pregnancy she had the desire (dohada) to bathe in a well of blood. When she came out, she was carried away by a bhāraṇḍa bird who thought she was a piece of flesh. Thanks to a bracelet that two unknown people had brought to the king, the latter was finally able to find her, and their son Udayana, in an ascetic grove.

[«previous (U) next»] — Udayana in Sanskrit glossary
Source: DDSA: The practical Sanskrit-English dictionary

2) Name of the king Vatsa; प्राप्यावन्तीनुदयनकथाकोविदग्रामवृद्धान् (prāpyāvantīnudayanakathākovidagrāmavṛddhān) Meghadūta 3. [A celebrated Prince of the lunar race, who is usually styled Vatsarāja. He reigned at Kauśambī. Vāsavadattā, Princess of Ujjayinī, saw him in a dream and fell in love with him. He was decoyed to that city and there kept in prison by Chaṇḍamahāsena, the king. But on being released by the minister, he carried off Vāsavadattā from her father and a rival suitor. Udayana is the hero of the play called Ratnāvalī and his life has been made the subject of several other minor compositions. See Vatsa also].

(-naḥ) 1. A name of Agastya: see agastya. 2. The name of a sovereign, king of Kausambi, and hero of the Vasavadatta, a dramatic poem; also, of part of the Vrihat Kat'ha. E. ud above, iṇ to go, and lyuṭ aff.

1) Udayaṇa (उदयण) in the Prakrit language is related to the Sanskrit word: Udayana.

Part 6: Story of the conversion of Udāyana < [Chapter XI - The story of Rauhiṇeya]