Tushita means something in Buddhism, Pali, Hinduism, Sanskrit, Jainism, Prakrit. If you want to know the exact meaning, history, etymology or English translation of this term then check out the descriptions on this page. Add your comment or reference to a book if you want to contribute to this summary article.

The Sanskrit terms Tuṣita and Tuṣitā can be transliterated into English as Tusita or Tushita, using the IAST transliteration scheme (?). 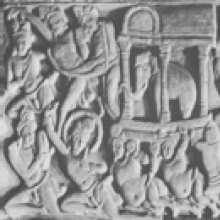 Tuṣita (तुषित) refers to one of the various classifications of Gaṇas: a group of deities attached to Lord Śiva.—Gaṇas are troops who generally appear in classes. Nine such classes are mentioned in the Purāṇas: They are (1) Ādityas (2) Viśvas or Viśvedevas (3) Vasus (4) Tuṣitas (5) Ābhāsvaras (6) Anilas (7) Mahārājikas (8) Sādhyas (9) Rudras. These are attached to Lord Śiva and serve under the command of Gaṇeśa, dwelling on Gaṇaparvata identified with Kailāsa—a peak of the Himālaya mountain.

1) Tuṣita (तुषित).—A class of Devas, sons of Kratu and Tuṣitā, twelve in number, being sons of Dakṣiṇā. Flourished in the Svāyambhuva epoch.1 They were also Jayadeva gods of the Svārociṣa epoch.2 They were the same as Jayadevas of the Svāyambhuva.3 Thirty-three in number, belong to the Sumanasa group of the 4th Sāvarṇa Manu;4 Gods also of the Cākṣusa epoch known as Ādityas.5 These are the twelve Ādityas of the Vaivasvata epoch;6 known as Prāṇakhyas in the Yajñas.

2b) The wife of Kratu and mother of the Tuṣita gods in the Svārociṣa epoch;1 gave birth to Viṣṇu by name Ajita in that epoch.2

Tuṣita (तुषित) is part of the six groups of Gods inhabiting the Kāmadhātu (the first of the three worlds), according to the 2nd century Mahāprajñāpāramitāśāstra chapter 32-34. The six classes of gods of the desire realm (kāmadhātu), attached to the five desirable objects, will fall into the hells (niraya) and be subjected to all the sufferings.

The Tuṣita gods represents one of the seven destination of rebirths in kāmadhātu, according to chapter XLIX, “[...] another, of pure generosity and morality, develops these two qualities further; he loves learning (bāhuśrutya), discriminates the beautiful and the ugly, desires nirvāṇa and is intensely attached to the qualities (guṇa): he is reborn among the Tuṣita gods”.

Tuṣita (तुषित) is the name of a Heaven, according to the Gaganagañjaparipṛcchā: the eighth chapter of the Mahāsaṃnipāta (a collection of Mahāyāna Buddhist Sūtras).—Accordingly, “What then, son of good family, is the recollection of gods (devānusmṛti), which is authorized by the Lord for Bodhisattvas? It is the recollection of two assemblies of gods. What are these two? The gods of the Pure Abode, and the Bodhisattvas hindered by only one birth, who dwell in the Tuṣita Heaven (tuṣita-bhavanastha). In that the Bodhisattva recollects the gods of the Pure Abode. Further, the Bodhisattvas who are hindered by only one birth, and who dwell in the Tuṣita Heaven recollect ten qualities as the summit. What are those ten qualities?”

1. Tusita - One of the palaces occupied by Konagamana Buddha in his last lay life. Bu.xxiv.18.

Four hundred years of human life are equal to one day of the Tusita world and four thousand years, so reckoned, is the term of life of a deva born in Tusita (A.i.214; iv.261, etc.).

It is the rule for all Bodhisattas to be born in Tusita in their last life but one; then, when the time comes for the appearance of a Buddha in the world, the devas of the ten thousand world systems assemble and request the Bodhisatta to be born among men. Great rejoicings attend the acceptance of this request (A.ii.130; iv.312; DhA.i.69f; J.i.47f).

The Tusita world is considered the most beautiful of the celestial worlds, and the pious love to be born there because of the presence of the Bodhisatta (Mhv.xxxii.72f).

Tusita is also the abode of each Bodhisattas parents (DhA.i.110).

The king of the Tusita world is Santusita; he excels his fellows in ten respects - beauty, span of life, etc. (A.iv.243; but see Cv.lii.47, where the Bodhisatta Metteyya is called the chief of Tusita).

Among those reborn in Tusita are also mentioned Dhammika, Anathapindika, Mallika, the thera Tissa (Tissa 10), Mahadhana and Dutthagamani.

a class of heavenly beings in the sensuous plane; s. deva (1).

Tuṣita (तुषित) refers to a group of deities (from the similarly-named heaven) mentioned as attending the teachings in the 6th century Mañjuśrīmūlakalpa: one of the largest Kriyā Tantras devoted to Mañjuśrī (the Bodhisattva of wisdom) representing an encyclopedia of knowledge primarily concerned with ritualistic elements in Buddhism. The teachings in this text originate from Mañjuśrī and were taught to and by Buddha Śākyamuni in the presence of a large audience (including the Tuṣitas).

One of the higher Kamadhatu Devas, among whom the future Maitreya lives:

Tusita is one of the six deva worlds of the Kamadhatu, located between the Yama heaven and the Nirmanarati heaven. Like the other heavens, Tusita is said to be reachable through meditation. It is the heaven where the Bodhisattva Svetaketu (Pali: Setaketu, "White Banner") resided before being reborn on Earth as Gautama, the historical Buddha; it is, likewise, the heaven where the Bodhisattva Natha ("Protector") currently resides, who will later be born as the next Buddha, Maitreya.

Like all heaven realms in Buddhism, the Tusita Heaven is the residence of divine beings or devas, and represents one of the highest realms of sensual pleasure. According to an excerpt of the Pali Canon,] a Theravada Buddhist text, time runs much differently than on Earth:

Tuṣita (तुषित) refers to one of the nine divisions of the Lokāntika-gods, according to chapter 1.2 [ādīśvara-caritra] of Hemacandra’s 11th century Triṣaṣṭiśalākāpuruṣacaritra (“lives of the 63 illustrious persons”): a Sanskrit epic poem narrating the history and legends of sixty-three important persons in Jainism. Accordingly, “[...] while in this way the Supreme Lord’s mind was woven with the threads of continuity of disgust with saṃsāra, then the Lokāntika-gods who have nine sub-divisions—Sārasvatas, Ādityas, Vahnis, Aruṇas, Gardatoyas, Tuṣitas, Avyābādhas, Maruts, and Riṣṭas, living at the end of Brahmaloka, having additional ornaments made by folded hands like lotus-buds on their heads, came to the feet of the Lord of the World”.

(-taḥ) A Tushita, a kind of subordinate deity, one of a class of thirty-six. F. tuṣ to please, itac aff. tārakā0 itac .

4. Sojourn in the Tuṣita heaven. < [Part 4 - The Bodhisattva in the Abhidharma system]

Act 10.10: Śākyamuni gazes upon the immense assembly gathered before him < [Chapter XV - The Arrival of the Bodhisattvas of the Ten Directions]

Verse 4.25 - The divisions of the Laukāntika deva < [Chapter 4 - The Celestial Beings]

Chapter 3 - The race of Dharma: three attributes of the self-born God < [Section 3 - Upodghāta-pāda]