Pari means something in Hinduism, Sanskrit, Buddhism, Pali, the history of ancient India, Marathi, Jainism, Prakrit, Hindi, biology. If you want to know the exact meaning, history, etymology or English translation of this term then check out the descriptions on this page. Add your comment or reference to a book if you want to contribute to this summary article. 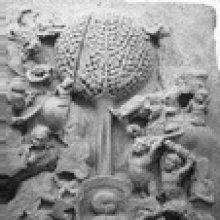 Pāri.—(EI 31; LP; PJS), abbreviation of Gujarāti Pārikha, Pārekha (Sanskrit Pārīkṣaka), originally meaning ‘an examiner of coins’; a surname among the Baniās of Gujarat. Note: pāri is defined in the “Indian epigraphical glossary” as it can be found on ancient inscriptions commonly written in Sanskrit, Prakrit or Dravidian languages.

1) Pari in India is the name of a plant defined with Cheilocostus speciosus in various botanical sources. This page contains potential references in Ayurveda, modern medicine, and other folk traditions or local practices It has the synonym Kaempferia speciosa (J. König) Thunb. (among others).

4) Pari in Tibet is also identified with Erythrina variegata It has the synonym Chirocalyx divaricatus Walp. (etc.).

If you are looking for specific details regarding Pari, for example chemical composition, health benefits, side effects, pregnancy safety, diet and recipes, extract dosage, have a look at these references.

Pari°, (indecl.) (Idg. *peri to verbal root *per, denoting completion of a forward movement (as in Sk. pṛ2, piparti. to bring across, promote; cp. Vedic pṛc to satisfy, pṛṇāti to fill, fulfill. See also P. para). Cp. Vedic pari, Av. pairi, Gr. pέri, Lat. per (also in adj. per-magnus very great); Obulg. pariy round about, Lith. per̃ through, Oir er- (intensifying prefix), Goth. faír, Ohg. fir, far=Ger. ver-) prefix, signifying (lit.) around, round about; (fig.) all round, i.e. completely, altogether. The use as prep. (with Acc. =against, w. Abl. =from) has entirely disappeared in Pāli (but see below 1a). As adv. “all round” it is only found at J. VI, 198 (parī metri causa; combined with samantato). ‹-› The composition form before vowels is pariy°, which in combination with ud and upa undergoes metathesis, scil. payir°. Frequent combinations with other preps. are pari +ā (pariyā°) and pari+ava (pariyo°); sampari°. Close affinities of p. are the preps. adhi (cp. ajjhesati› pariyesati, ajjhogāhati›pariyogāhati) and abhi (cp. abhirādheti›paritoseti, abhitāpa›paritāpa, abhipīḷita›pari°, abhipūreti›pari°, abhirakkhati›pari°), cp. also its relation to ā in var. combinations.—Meanings. 1. (lit.) (a) away from, off (cp. Vedic pari as prep. c. Abl. : ) °kaḍḍhati to draw over, seduce, °cheda cutting off, restriction, °puñchati wipe off.—(b) all round, round (explained by samantato, e.g. at Vism. 271 in pallaṅka): °anta surrounded, °esati search round, °kiṇṇa covered all round (i.e. completely, cp. explanation as “samantato ākiṇṇa”), °carati move round, °jana surrounding people, °dhāvati run about, °dhovati wash all round, °paleti watch all round, fig. guard carefully, °bhamati roam about, °maṇḍala circular (round), °sā assembly (lit. sitting round, of sad).—2. (fig.) (a) quite, completely, very much, kat) ecoxήn: °ādāna consummation, °āpanna gone completely into, °odāta very pure, °osāna complete end, °gūhati to hide well, °toseti satisfy very much, °pūreti fulfil, °bhutta thoroughly enjoyed, °yañña supreme sacrifice, °suddha extremely clean.—(b) too much, excessively (cp. ati° and adhi°): °tāpeti torment excessively, °pakka over-ripe.—A derivation (adv.) from pari is parito (q. v.). On its relation to Sk. pariṣ see parikkhāra. A frequently occurring dialectical variant of pari° is pali° (q. v.).—Note. The explanation of P. Commentators as regards pari is “pariggahaṭṭho” Ps. I, 176; “paricca” SnA 88; “parito” VvA. 316; PvA. 33. (Page 421)

pari (परि).—A particle and prefix to words from the Sanskrit. Its various powers will appear from the examples below.

parī (परी).—f ( P) A fabulous monster with a human face, body of a horse, and winged. Formed by Muhammadans to support and set off their tabut in the Muharram. Applied fig. to a beautiful woman &c., a fairy, a sylph.

pārī (पारी).—f A common term for the integuments or sheaths encircling the kēḷaphūla or flowering head of the Plantain: also for those investing the several phaṇyā or divisions of the grand fruit-stalk enclosed within the kēḷaphūla. The fairer or whiter of them (i. e. the interior) are severally termed (humorously, or in child's play) gāya, the darker-colored, mhaisa. 2 The encircling crust of the sweetmeat mōdaka. 3 W A mango-stone.

pari (परि).—A particle and prefix to words from the Sanskrit. Its various uses will appear from the examples below.

parī (परी).—f A fabulous monster with a human face, body of a horse, and winged. A beautiful woman &c.

1) As a prefix to verbs and nouns derived from them, it means (a) round, round about, about; (b) in addition to, further; (c) opposite to, against; (d) much, excessively.

5) At the end of an adjectival comp. परि (pari) has the sense of 'exhausted by', or 'feeling repugnance for'; as in पर्यध्ययनः (paryadhyayanaḥ) = परिग्लानोऽध्ययनाय (pariglāno'dhyayanāya).

4) To be changed or transformed.

1) A rope for tying an elephant's feet.

Pari (परि).—A particle and prefix to words implying, 1. Ubiquity, (all round, on every side.) 2. Part, portion. 3. Abandonment, (away.) 4. End, term. 5. Sickness. infirmity. 6. Enforcement, stress, (even, very great.) 7. Separateness, several distributions, (each by each, &c.) 8. Embracing, encircling, (round, round about.) 9. Depreciation, exposure of faults. 10. Homage, respect. 11. Rejection, turning off or away. 12. Ornament. 13. Diffusion, extension. 14. Mark or sign. 15. Sorrow. 16. Cessation, stop, impediment. 17. Truth. 18. An exclamation of Pleasure or satisfaction. As parikarttuṃ, to adorn; parikṣipnuṃ, to abandon; parichettuṃ, to divide; paridevituṃ, to lament; parirabdhuṃ, to embrace; parivrajituṃ, to go about, to wander, &c.: see the following compound nouns. E. pṝ to complete, to satisfy, aff. in; in combination with roots forming nouns by ghañ, the i of pari is sometimes optionally lengthened, as parī.

Pari (परि).—[adverb] round, about (often °—, also to denote abundance or high degree); [preposition] round, about, against, opposite to, beyond, above, more than ([accusative]); from, out of, after, in consequence or on account of, according to ([ablative]); *around i.e. outside or with exception of ([ablative], also pari pari).

Parī is a Sanskrit compound consisting of the terms pari and i (इ).

2) fully, abundantly, richly ([especially] [in the beginning of a compound] [where also parī] to express fulness or high degree), [Ṛg-veda] etc. etc.

11) in consequence or on account or for the sake of [Ṛg-veda; Atharva-veda]

12) according to ([especially] dharmaṇas pari, according to ordinance or in conformity with law or right), [Ṛg-veda]

—to go about, move in a circle;

— (with or sc. manasā) to perceive, ponder, [Mahābhārata; Rāmāyaṇa] :—[Intensive] [Ātmanepada] parīyate, to move round or in a circle, [Ṛg-veda]

Pari (परि):—prep. All round; completely.

1) Pari (परि):——a Sanskrit suffix imparting the sense of round, around, about, round about; fully, abundantly, richly; against; in the direction of; beyond; more than; outside of, etc.

1) Pari (परि) in the Prakrit language is related to the Sanskrit word: Pari.

Pari (ಪರಿ):—
1) [noun] the act of moving, walking, etc.
2) [noun] a running; a moving rapidly.
3) [noun] a flowing in stream; a current or flow of water or other liquid.
4) [noun] a unit of linear measure.
5) [noun] a way, path or channel of movement.
6) [noun] a way or manner in which something is done, is usu. done or is to be done.
7) [noun] manner or state of being; condition.
8) [noun] a large organised body of soldiers; an army.
9) [noun] a main division of a book; a chapter.
10) [noun] an amount or quantity greater than is necessary, desirable, usable, etc.; too much; excess; the normal normal where wild animals come and where they are hunted or trapped.
11) [noun] a carrier of messages; a messenger; a courier.
12) [noun] a narrow channel along the side of a road or street, to carry off water; a gutter.
13) [noun] a depression in the ground, as a pot-hole on a road, where water gets stagnated.
14) [noun] a row of houses.
15) [noun] the space, amount or degree to which a thing extends.

Paṟi (ಪಱಿ):—
1) [noun] the act of cutting, severing.
2) [noun] that which is cut, severed, separated by cutting.
3) [noun] ಪಱಿವಱಿಯಾಗು [parivariyagu] paṛivaṛiyāgu to be cut into small pieces; 2. to be defeated, destroyed or spoiled.

Pāri (ಪಾರಿ):—[noun] either of the two beams of a bullock-cart, fixed parellel to and on either side of the main beam, to which side pegs are fixed.

Pāri (ಪಾರಿ):—[noun] a number of objects arranged in a line; a row.

Pāṟi (ಪಾಱಿ):—[noun] a woman who indulges in sexual relations with several men for pleasure or money.

Verse 3.4.468 < [Chapter 4 - Descriptions of Śrī Acyutānanda’s Pastimes and the Worship of Śrī Mādhavendra]

The Literature of the Ancient Egyptians (by E.A. Wallis Budge)

Chapter V - Books Of The Dead Of The Græco-roman Period