Pandit means something in Hinduism, Sanskrit, Hindi. If you want to know the exact meaning, history, etymology or English translation of this term then check out the descriptions on this page. Add your comment or reference to a book if you want to contribute to this summary article. 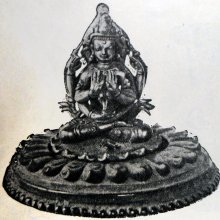 1) A pandit is a scholar and a teacher, particularly one skilled in the Sanskrit language, who has mastered the four Vedic scriptures, Hindu rituals, Hindu law, religion, music, and/or philosophy under a Guru in a Gurukul or has been tutored under the ancient vedic Guru Shishya academic tradition. The English loan word pundit is derived from it.

In the original usage of the word, "Pandit", synonymous to "Purohits", refers to a Hindu, almost always a Brahmin, who has memorized a substantial portion of the Vedas, along with the corresponding rhythms and melodies for chanting religious verses or singing them during prayers or rituals. The designation may also appear as the abbreviation "Pt." or "Pnt."

2) The Sanskrit word Pundit, which is also now used in the English language, is derived from Pandit, which means a scholar or someone who is highly learned and an intellectual. Pandits, or locals learned in the dharmasastra, were also employed as court advisors during the 18th and 19th Centuries.

Pandit in Hindi refers in English to:—(nm) a Brahman (by caste); a scholar, learned person; one well-versed in scriptures and performance of religious rites; -[mamdali/sabha] an assembly of scholars; a learned assembly; ~[raja] a pre-eminent scholar, king of scholars; ~[vadi] a pedant, pedagogue..—pandit (पंडित) is alternatively transliterated as Paṃḍita.

Search found 86 books and stories containing Pandit, Paṇḍit, Pandut; (plurals include: Pandits, Paṇḍits, Panduts). You can also click to the full overview containing English textual excerpts. Below are direct links for the most relevant articles:

Chapter XVI - The Vedānta or System of Śaṅkara Āchārya

Chapter I - The Cārvāka System

Some Trends in Our Parliamentary Democracy < [January 1957]

Some Trends in Our Parliamentary Democracy < [January 1957]

General Estimate of the Commentaries < [Introduction]