Panda means something in Hinduism, Sanskrit, Buddhism, Pali, the history of ancient India, Marathi, Jainism, Prakrit, Hindi, biology. If you want to know the exact meaning, history, etymology or English translation of this term then check out the descriptions on this page. Add your comment or reference to a book if you want to contribute to this summary article. 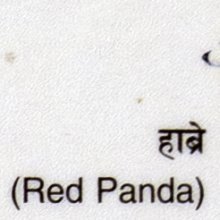 Panda [पान्डा] in the Nepali language is the name of a plant identified with Spiraea arcuata Hook.f. from the Rosaceae (Rose) family having the following synonyms: Spiraea canescens var. glabra. For the possible medicinal usage of panda, you can check this page for potential sources and references, although be aware that any some or none of the side-effects may not be mentioned here, wether they be harmful or beneficial to health.

Pāṇḍā.—(EI 32), a temple superintendent; same as Vārika. Note: pāṇḍā is defined in the “Indian epigraphical glossary” as it can be found on ancient inscriptions commonly written in Sanskrit, Prakrit or Dravidian languages.

pāṇḍa (पांड).—m A land measure,--the twentieth part of a bighā, or twenty square kāṭhyā or rods. 2 N. D. A plot or parcel of ground (field or garden).

pānda (पांद).—f A lane through a village or between fields or enclosures.

5) [wrong reading] for pāṇḍya and pāṇḍu.

Panda in Hindi refers in English to:—(nm) a Hindu: priest helping devout pilgrims in the performance of religious rites on holy river banks; ~[giri] the function or profession of a [pamda]..—panda (पंडा) is alternatively transliterated as Paṃḍā.

Paṃḍa (ಪಂಡ):—[noun] a man lacking normal functions of the testes.

Paṃḍa (ಪಂಡ):—[noun] a priest who conducts rituals in a pilgrim centres (in North India).

Introduction (the importance of Translation, Anuvāda)

Introduction (to the critical study of the Bhishma Charitra)