Musala means something in Buddhism, Pali, Hinduism, Sanskrit, Jainism, Prakrit, Marathi, Jainism, Prakrit, Hindi. If you want to know the exact meaning, history, etymology or English translation of this term then check out the descriptions on this page. Add your comment or reference to a book if you want to contribute to this summary article.

The Sanskrit term Muśala can be transliterated into English as Musala or Mushala, using the IAST transliteration scheme (?).

Alternative spellings of this word include Musal. 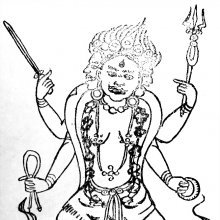 Musala (मुसल):—A weapon of Śeṣa; to exterminate all the Yādavas by the curse of sages; came out of Sāmba’s womb which was powdered and thrown into the sea; a piece was devoured by a fish, and a hunter who got it, shot it against Kṛṣṇa sitting, little knowing that he was the Lord; it was the cause of the Lord departing to heaven; other pieces became kuśa grass whih became in the hands of the Yādavas iron sticks with which they struck one another and died.

1b) A weapon of Śeṣa;1 to exterminate all the Yādavas by the curse of sages; came out of Sāmba's womb which was powdered and thrown into the sea; a piece was devoured by a fish, and a hunter who got it, shot it against Kṛṣṇa sitting, little knowing that he was the Lord; it was the cause of the Lord departing to heaven; other pieces became kuśa grass which became in the hands of the Yādavas iron sticks with which they struck one another and died.2

Musala (मुसल) is a name mentioned in the Mahābhārata (cf. XIII.4.52, XIII.4) and represents one of the many proper names used for people and places. Note: The Mahābhārata (mentioning Musala) is a Sanskrit epic poem consisting of 100,000 ślokas (metrical verses) and is over 2000 years old.

Musala (मुसल) refers to “pestles” or “clubs” and represents one of the various weapons equipped by the Daityas in their war against Lalitā, according to the Brahmāṇḍa-purāṇa 4.22. Accordingly, “[...] thereupon, crores of Daityas producing reverberating chattering noise furiously prepared themselves (to fight) against Parameśvarī (Lalitā). [...] Crores of Daityas were fully equipped with coats of mail and had the following weapons and missiles in their hands [viz.: Musalas (pestles, clubs)], and thousands of similar weapons and missiles very dreadful and capable of destroying living beings”.

Musala is the name of the Indian woon pestle, which is an ordinary cylindrical rod of hard wood. There is no scope for the introduction of various shapes in relation to this plain weapon, and consequently it has remained unaltered in its form from early times.

Musala (मुसल, “pestle”).—According to mythology, hala and musala are the original weapons of Ananta. They are also known as vaiṣṇava-praharanāni. The Harivaṃśa says they were first made available to Balarāma before his fight with King Jarāsandha of Rājagṛha. Sunanda and Saṃvartaka were the respective names of his divine weapons.

Musala (मुसल, “pestle”) refers to one of the several “attributes” (āyudha) or “accessories” of a detiy commonly seen depicted in Hindu iconography, defined according to texts dealing with śilpa (arts and crafs), known as śilpaśāstras.—Musala is the name of the Indian wooden pestle, which is an ordinary cylindrical rod of hard wood. It can be used as an offensive weapon.

Musala (मुसल) refers to a kind of weapon (mace or club). It is a Sanskrit word defined in the Dhanurveda-saṃhitā, which contains a list of no less than 117 weapons. The Dhanurveda-saṃhitā is said to have been composed by the sage Vasiṣṭha, who in turn transmitted it trough a tradition of sages, which can eventually be traced to Śiva and Brahmā.

Muśala (मुशल) refers to a “mortar”, according to the Ṣaṭsāhasrasaṃhitā, an expansion of the Kubjikāmatatantra: the earliest popular and most authoritative Tantra of the Kubjikā cult.—Accordingly, “The man of knowledge should mark the sacred fields located in the towns. Thus (this) category has been explained externally; now listen (to how it is) in the home. Prayāga is in the middle (of the house). Varuṇā is present in the door. Kollāpura is in the scissors. The stove is Aṭṭahāsaka. One should know that the threshing floor is Jayantī and Caritra is the mortar (in which grain is cleaned or threshed). The winnowing fan is said to be Ekāmraka and Devikoṭa is the grinding stone. (Thus there are) the dish (used to cover water jars), the bedstead, mortar (muśala), threshold, stove, winnowing fan and grinding stone. [...]”.

Musala (मुसल) is a Sanskrit word for a weapon translating to “club”. Sculptures or other depictions of Hindu dieties are often seen holden this weapon in their hand.

Musalā (मुसला) is the name of Dūtī (i.e., messengers of Lord Vajrapāṇi) mentioned as attending the teachings in the 6th century Mañjuśrīmūlakalpa: one of the largest Kriyā Tantras devoted to Mañjuśrī (the Bodhisattva of wisdom) representing an encyclopedia of knowledge primarily concerned with ritualistic elements in Buddhism. The teachings in this text originate from Mañjuśrī and were taught to and by Buddha Śākyamuni in the presence of a large audience (including Musalā).

Muṣala (मुषल) refers to a “pestle” and represents one of the items held in the left hand of Heruka: one of the main deities of the Herukamaṇḍala described in the 10th century Ḍākārṇava chapter 15. Heruka is positioned in the Lotus (padma) at the center; He is the origin of all heroes; He has 17 faces (with three eyes on each) and 76 arms [holding, for example, muṣala]; He is half black and half green in color; He is dancing on a flaming sun placed on Bhairava and Kālarātrī.

Accordingly: “Sagara put in his heart archery and the characteristics of other weapons just from hearing them, as easily as his own name. He attained skill in fighting with the bow, sword and shield, dagger, arrow, axe, lance, javelin, club, kampaṇa (?), staff, spear, pike, plow-share, mace, cudgel (i.e., musala), pattiṣa, duḥsphoṭa (?), bhuṣaṇḍhī sling, arrow, trident, dart, and other weapons in conformity with the manuals. He became filled with all the arts like the full moon with digits, and he was adorned with good qualities, reverence, etc., like ornaments”.

musaḷa (मुसळ).—n (musala S) A pestle, esp. a wooden pestle used in husking rice. 2 A beam or an upright (any one of the three) of a sugarmill.

3) A kind of surgical instrument.

5) Name of a constellation.

(-laṃ) 1. A pestle, a wooden pestle used for cleaning rice. 2. A club. f. (-lī) 1. A plant, (Curculigo orchioides.) 2. A houselizard. E. mus to break, aff. kalac; it is also read with its compounds and derivatives muṣala, muṣalī, and sometimes muśala, &c.

Musala (मुसल) in the Sanskrit language is related to the Prakrit word: Musala.

Musala (मुसल) in the Prakrit language is related to the Sanskrit word: Musala.

1) [noun] a long, round tool for pounding or grinding substances in a mortar; a pestle.

1) [noun] a long, round tool for pounding or grinding substances in a mortar; a pestle.

4) [noun] the moving part inside a bell, that strikes the side of the bell; a tongue; a clapper.

5) [noun] a kind of medical implement used in surgery.

6) [noun] a Northern constellation in the Milky Way, between Cygnus and Andromeda; the Lacerta.