Heruka means something in Buddhism, Pali, Hinduism, Sanskrit. If you want to know the exact meaning, history, etymology or English translation of this term then check out the descriptions on this page. Add your comment or reference to a book if you want to contribute to this summary article. 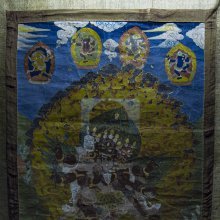 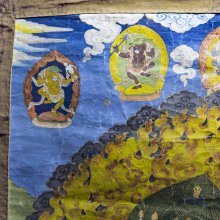 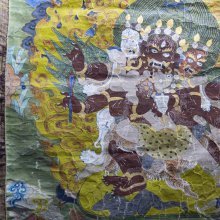 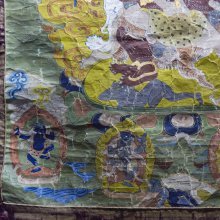 Heruka (हेरुक) refers to one of the various emanations of Akṣobhya having their Sādhana described in the 5th-century Sādhanamālā (a collection of sādhana texts that contain detailed instructions for rituals).—His Colour is blue; his Symbols are the vajra and kapāla; his Variety is single; has two arms.—Heruka is one of the most popular deities of the Buddhist pantheon and a regular Tantra, the Heruka-antra, is devoted to his worship. Heruka is worshipped singly as well as in yab-yum. When he is in yab-yum he is generally known as Hevajra and in this form he is popular in Tibet.

The Dhyāna (meditation instructions) of Heruka described in the Sādhanamālā as follows:

“The worshipper should conceive himself as the god (Heruka) who stands on a corpse in the ardhaparyaṅka attitude. He is well-clad in human skin and his body is besmeared with ashes. He wields the vajra in the right hand and from his left shoulder hangs the khaṭvāṅga with a flowing banner, like a sacred thread. He carries in his left hand the kapāla full of blood. His necklace is beautified by a chain of half-a-hundred severed heads. His face is slightly distorted with bare fangs and blood-shot eyes, His brown hair rises upwards and forms into a crown which bears the effigy of Akṣobhya. He wears a kuṇḍala and is decked in ornaments of bones. His head is beautified by five skulls. He bestows Buddhahood and protects the world from the Māras (wicked beings)”

[In another sādhana for the worship of this particular kind of Heruka the khaṭvāṅga is described as being marked with a vajra of five thongs and decorated with a banner with jingling bells, human heads and double lotus, the lower part of the khaṭvāṅga resembling the vajra with one thong. The sādhana does not mention the number of heads in the necklace, but says simply that they are strung with guts. His left leg rests on the double lotus (and not on the corpse) while the right is placed on the left thigh in a dancing attitude.]

1) Heruka (हेरुक), together with his consort Vārāhī, is the main deity of the Herukamaṇḍala described in the 10th century Ḍākārṇava chapter 15. Heruka is positioned in the Lotus (padma) at the center; He is the origin of all heroes; He has 17 faces (with three eyes on each) and 76 arms; He is half black and half green in color; He is dancing on a flaming sun placed on Bhairava and Kālarātrī. In the Herukamaṇḍala, the east division of the entire maṇḍala is blackish dark-blue in color; the north division, green; the west division, red; and the south division, yellow. Heruka is the origin of all heroes, and Vārāhī is the origin of all Ḍākinīs.

2) Heruka (हेरुक) is the name of a Vīra (hero) who, together with the Ḍākinī named Suvīrā forms one of the 36 pairs situated in the Vajracakra, according to the same work. Accordingly, the vajracakra refers to one of the four divisions of the sahaja-puṭa (‘innate layer’), situated within the padma (lotus) in the middle of the Herukamaṇḍala. The 36 pairs of Ḍākinīs and Vīras [viz., Heruka] each have one face and four arms; they hold a skull bowl, a skull staff, a small drum and a knife; they are dark-bluish-black in color.

Heruka (हेरुक) is one of the most popular deities of the Buddhist pantheon and a regular Tantra, the Heruka Tantra, is devoted to his worship. Heruka is worshipped singly as well as in yab-yum. When he is in yab-yum he is generally known as Hevajra and in this form he is popular in Tibet, Many of his forms are described in the Sādhanamālā

1) An attendant on Śiva.

(-kaḥ) 1. An attendant on Mahakala, or Siva in that form. 2. An inferior divinity of the Baud'dhas. E. hi to go, uka Unadi aff., ruṭ augment.

Heruka (हेरुक).—m. An attendant on Śiva.

3) of an inferior Buddha, [Buddhist literature]

4) [plural] Name of a class of heretics, [cf. Lexicographers, esp. such as amarasiṃha, halāyudha, hemacandra, etc.]

Search found 6 books and stories containing Heruka, Herukā; (plurals include: Herukas, Herukās). You can also click to the full overview containing English textual excerpts. Below are direct links for the most relevant articles:

Part 4 - The particular details < [E. Knowing what is to be abandoned and accepted, and how the siddhis are received]