Bhanda means something in Buddhism, Pali, Hinduism, Sanskrit, the history of ancient India, Marathi, Jainism, Prakrit, Hindi, biology. If you want to know the exact meaning, history, etymology or English translation of this term then check out the descriptions on this page. Add your comment or reference to a book if you want to contribute to this summary article. 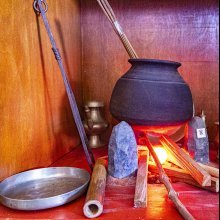 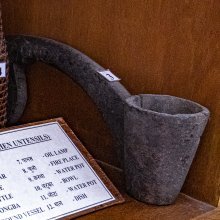 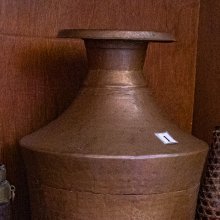 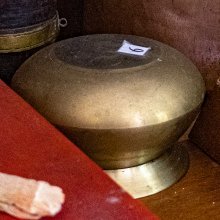 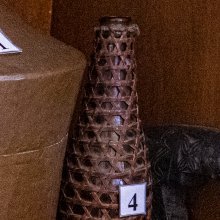 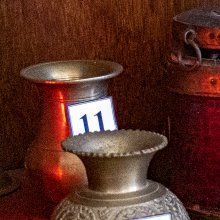 [«previous (B) next»] — Bhanda in Ayurveda glossary
Source: Wisdom Library: Local Names of Plants and Drugs

Bhanda [¿ भण्डा ?] in the Hindi language is the name of a plant identified with Geranium nepalense Sweet from the Geraniaceae (Geranium) family having the following synonyms: Geranium pallidum, Geranium patens, Geranium radicans. For the possible medicinal usage of bhanda, you can check this page for potential sources and references, although be aware that any some or none of the side-effects may not be mentioned here, wether they be harmful or beneficial to health.

Bhāṇḍa (भाण्ड) refers to “utensils”, according to the Bṛhatsaṃhitā (chapter 10), an encyclopedic Sanskrit work written by Varāhamihira mainly focusing on the science of ancient Indian astronomy astronomy (Jyotiṣa).—Accordingly, “If the course of Saturn (śanaiścara) should lie through the constellation of Hasta, barbers, mill-men, thieves, physicians, weavers, elephant keepers, prostitutes, the Kośalas and garland makers will suffer. If the course of Saturn should lie through the constellation of Citrā, women, writers, painters, various utensils [i.e., citra-bhāṇḍa] will suffer; if through Svāti, the people of Magadha, reporters, messengers, charioteers, sailors, dancers and the like will suffer miseries”.

Bhāṇḍa (भाण्ड) refers to “commodity” and represents one of the twenty operations (logistics) of pāṭīgaṇita (“science of calculation which requires the use of writing material—the board”), according to Pṛthudakasvāmī’s commentary on the Brāhmasphuṭasiddhānta by Brahmagupta, a Sanskrit treatise on ancient Indian mathematics (gaṇita-śāstra) and astronomy from the 7th century.—The Hindu name for barter is bhāṇḍa-pratibhāṇḍa (“commodity for commodity”). All the Hindu works on pāṭīgaṇita contain problems relating to the exchange of commodities. It is pointed out in these works that problems on barter are cases of compound proportion, and can be solved by the Rule of Five, etc.

Bhanda or Bhandu Thera.—A colleague of Ananda whom Kassapa reported to the Buddha at Veluvana for disputing with Abhinjaka, colleague of Anuruddha. The Buddha sent for the disputants and rebuked them for their contentiousness. They confessed their fault and were pardoned. S.ii.204f.

Bhāṇḍa (भाण्ड) refers to a “plate (for flowers)” [i.e., idaṃ kamaṇḍaluṃ puṣpa-bhāṇḍaṃ saṃkalpayāmy ahaṃ], according to the Guru Mandala Worship (maṇḍalārcana) ritual often performed in combination with the Cakrasaṃvara Samādhi, which refers to the primary pūjā and sādhanā practice of Newah Mahāyāna-Vajrayāna Buddhists in Nepal.

Bhāṇḍa.—cf. bhaṇḍa (EI 5), a bale of goods. Note: bhāṇḍa is defined in the “Indian epigraphical glossary” as it can be found on ancient inscriptions commonly written in Sanskrit, Prakrit or Dravidian languages.

[«previous (B) next»] — Bhanda in Marathi glossary
Source: DDSA: The Molesworth Marathi and English Dictionary

3) bhāṇḍa (भांड).—m (S) A caste or an individual of it. They are jesters, buffoons, mimes, mimickers, actors, imitators of the cries of birds and beasts &c.

[«previous (B) next»] — Bhanda in Sanskrit glossary
Source: DDSA: The practical Sanskrit-English dictionary

3) Any tool or instrument, an implement.

9) Trappings or harness of a horse; नानाङ्कचिह्नैर्नवहेमभाण्डैः (nānāṅkacihnairnavahemabhāṇḍaiḥ) Bu. Ch.2.4.

[«previous (B) next»] — Bhanda in Hindi glossary
Source: DDSA: A practical Hindi-English dictionary

Bhaṃḍa (ಭಂಡ):—[noun] a man whose occupation it is to cut, dress the hair and to shave or trim the beard of customers; a barber.

1) [noun] anything bought and sold; any article of commerce; a commodity; merchandise.

2) [noun] wealth (money or property) invested in a business by a person, corporation, etc.; capital.

3) [noun] the object, end or purpose for which something is used; use.

4) [noun] a performer who entertains by jokes, tricks, etc. in a play or film; a jester; a clown.

5) [noun] lack of the sense of shame; shamelessness; impudence.

7) [noun] he who argues illogically or without any sense.

1) [noun] a metallic or earthen container.

2) [noun] any article or device used or needed in a given activity; tool, instrument, utensil, etc.; an implement.

3) [noun] a kind of musical instrument.

4) [noun] the harness of a horse; horse-trappings.

6) [noun] the wealth, whether in money or property, owned or employed in business by an individual, firm; capital.

9) [noun] any collection of articles; paraphernalia.

10) [noun] a sum of money set aside for some particular purpose; a fund.

Verse 9.271 < [Section XXXVIII - Treatment of Criminals and their Punishment]