Muladhara means something in Hinduism, Sanskrit, Marathi, Hindi. If you want to know the exact meaning, history, etymology or English translation of this term then check out the descriptions on this page. Add your comment or reference to a book if you want to contribute to this summary article.

Alternative spellings of this word include Muladhar. 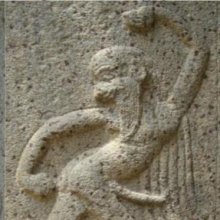 Mūla = Root, Origin, Essence; Ādhāra = Basis, Foundation. Just as the womb of the mother creates the basic requirement for the growth of the embryo, the Mūlādhāra Chakra forms the basis and the starting point for our spiritual development. It is the foundation from which we climb the ladder of the Chakras; the root from which we receive the nourishment for our spiritual development. For this reason, and because it lies at the lowest point of the spinal column below the Coccyx, it also bears the name “Root Chakra”.

Kundalinī Shakti (spiritual energy) has its roots in the Mūlādhāra Chakra, but it is in a deep, motionless sleep. When we awaken this slumbering potential that lies within the Mūlādhāra Chakra we are able to work our way towards the light of knowledge and attain the fruit of Self-Realisation.

Muladhara (Sanskrit: मूलाधार, Mūlādhāra) is one of the seven primary chakras according to Hindu tantrism. It may be represented by the color red, but its root square form is usually yellow.

Muladhara is said to be located near the basal end of the spinal column in the vicinity of the coccygeal plexus beneath the sacrumit, while its kshetram, or superficial activation point, is located on the perineum.

Appearance: Its symbol is a yellow, square lotus, surrounded by eight shining spears on the sides and corners with four red petals. The deity of this region is Indra, who is yellow in color, four-armed, holding a vajra and blue lotus in his hands. He is mounted upon the white elephant Airavata, who has seven trunks, denoting the seven elements vital to physical functioning. Occasionally, instead of Indra, the deity may be Ganesha, with coral orange skin, wearing a lemon yellow dhoti with a green silk scarf draped around his shoulders. In the three hands he holds a laddu, a lotus flower and a hatchet, and the fourth is raised in the mudra of dispelling fear.

The seed mantra syllable is लं laṃ. Within the bindu, or point that forms a part of the letter, just above it, is Brahma, who is deep red, with four faces and four arms, holding a staff, a sacred vase of nectar, a Jappa Mala, and making the gesture of dispelling fear. Alternatively, instead of the staff and Jappa mala, he may be holding a lotus flower and the sacred scriptures. He is seated on a swan. A goddess called Dakini is his shakti. She is beautiful, with three eyes and four arms. Dakini is usually depicted shining red or white, holding a trident, a skulled staff, a swan, and a drinking vessel, and is seated on a swan. Instead of a swan and drinking vessel, at times she holds a sword and a shield.

Muladhara is the base from which the three main psychic channels or nadis emerge: the Ida, Pingala and Sushumna. It is also believed that Muladhara is a subtle abode of the Hindu God, Ganapati. And in the highest revered prayer for Ganapati, the Ganapati Atharvashirsha, it is mentioned that 'one who worships Lord Ganapati would easily grasp the concept and realize Brahman'.

The transcendental basis of physical nature, and is considered the "root" or "foundation" chakra, is known as Muladhara. Kundalini awakening begins here. It is also known as the seat of the "red bindu" or subtle drop, which rises up to the "white bindu" in the head to unite the female and masculine energies, or Shakti and Shiva. It is associated with the element of earth, the sense of smell and the action of excretion.

"By meditating thus on Her who shines within the Muladhara Chakra, with the luster of ten million Suns, a man becomes Lord of speech and King among men, and an Adept in all kinds of learning. He becomes ever free from all diseases, and his inmost Spirit becomes full of great gladness. Pure of disposition by his deep and musical words, he serves the foremost of the Devas."

Mūlādhāra is a Sanskrit compound consisting of the terms mūla and ādhāra (आधार).

Mūlādhāra (मूलाधार) [Also spelled muladhar]:—(nm) one of the six ganglions in the human body (according to [haṭhayoga]); also called [mūlādhāra cakra].

Contents of the Haṃsa Upaniṣad