Matsyavatara means something in Hinduism, Sanskrit, Marathi, Hindi. If you want to know the exact meaning, history, etymology or English translation of this term then check out the descriptions on this page. Add your comment or reference to a book if you want to contribute to this summary article. 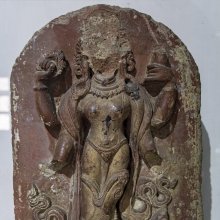 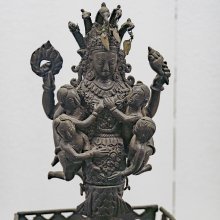 Matsyāvatāra (मत्स्यावतार) refers to the “fish incarnation” of Viṣṇu and was once depicted and worshipped in ancient Kashmir (Kaśmīra) as mentioned in the Nīlamatapurāṇa.—The Nīlamata refers to this incarnation in the legend of the birth of Kaśmīra. It is stated that the movable and immovable creation is destroyed at the end of a manvantara. The whole world changes into a sea with water alone—a form of Śiva himself—existing all around. Then appears Satī in the form of a boat in which the future Manu places all the seeds. Viṣṇu, in the form of Matsya, carries that boat by means of his horn and fastens that to the peak Naubandhana.

Matsyāvatāra (मत्स्यावतार) refers to one of the various Vibhava manifestations according to the Īśvarasaṃhitā 24.312-316.—Accordingly, “one shall think of Him who superintends (everything). He remains in the midst of the waters of His (own) māyā. He has the (his) limbs concealed in His impersonal form. He is shining (bedecked) with knowledge and group of guṇas which has become His fin. It (form of fish) is Brahman rising and disappearing with a shining scale (śṛṅga). He is to be thought of as bearing (at the time of kalpa) the vast earth (which takes) with the form of a boat occupied by the host of progenitors (Brahmā) and bears with a spotless body assembling pearl. He is of the nature of fish whose eyes never closing”.

These Vibhavas (e.g., Matsyāvatāra) represent the third of the five-fold manifestation of the Supreme Consciousness the Pāñcarātrins believe in. Note: Here the deity is Matsya, a descent of Viṣṇu. At the end of the kalpa, that is deluge when the earth is about to sink, Viṣṇu took the form of fish and turned the earth into a boat which was occupied by Brahmā and others. In order that the boat would not be drifted away, the Lord tied the boat to his scale (śṛṅga) with a serpent and saved the world. Ekaśṛṅgatanu is identical with the Matsya descent. Since the boat was tried to the scale (śṛṅga) of the fish, Matsya is called as having a body, in whose scale the body was tied.

Matsyāvatāra (मत्स्यावतार) or Matsya is one of the daśāvatāra (ten incarnations) of Viṣṇu, is found depicted at the  Kallazhagar Temple in  Madurai, which represents a sacred place for the worship of Viṣṇu.—The upper part of Matsyāvatāra’s body keeps its usual form, while the lower part takes the form of a fish. Viṣṇu in this form has four arms where the upper hands hold the conch and the discus in the left and right respectively. The other two right and left hands hold the sword and the shield.

Matsyāvatāra is a Sanskrit compound consisting of the terms matsya and avatāra (अवतार).

(-raḥ) Vishnu in his first Avatara; when the seventh Manu was reigning, the whole earth was destroyed by a flood and all living beings perished except the reigning Manu and the seven Rishis who were saved by Vishnu in the form of a fish.

Matsyāvatāra (मत्स्यावतार):—[from matsya > matsa] m. ‘fish-descent’, Name of the first of the 10 incarnations of Viṣṇu (who became a fish to save the 7th Manu from the universal deluge; the conversation between them forms the Matsya-Purāṇa q.v.; in [Mahābhārata i.] the fish is represented as an incarnation of Brahmā; cf. [Indian Wisdom, by Sir M. Monier-Williams 327, 397 etc.])

Matsyāvatāra (मत्स्यावतार):—(nm) the first of the ten incarnations of Lord Vishnu (in the form of a big fish).