Mina means something in Buddhism, Pali, Hinduism, Sanskrit, the history of ancient India, Marathi, Jainism, Prakrit, Hindi. If you want to know the exact meaning, history, etymology or English translation of this term then check out the descriptions on this page. Add your comment or reference to a book if you want to contribute to this summary article.

Alternative spellings of this word include Meen. 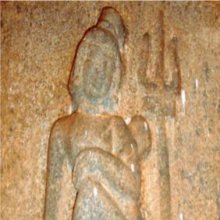 Mīna (मीन) refers to “fish”. The word is used throughout Dharmaśāstra literature such as the Manusmṛti. (See the Manubhāṣya, verse 11.68)

Mīna (मीन).—Description of a women of fish (mīna) type;—A woman who has long, large and high breasts, is fickle and without any twinkle in her eyes, has many servants and offsprings, is fond of water, is said to have the nature of a fish (mīna or matsya).

Mīna (मीन) corresponds with the Pisces zodiac sign and refers to the twelfth and last of twelve rāśi (zodiacal sign), according to the Mānasāra. Rāśi is one of the three alternative principles, besides the six āyādiṣaḍvarga, used to constitute the “horoscope” of an architectural or iconographic object. Their application is intended to “verify” the measurements of the architectural and iconographic object against the dictates of astrology that lay out the conditions of auspiciousness.

The particular rāśi (e.g., mīna) of all architectural and iconographic objects (settlement, building, image) must be calculated and ascertained. This process is based on the principle of the remainder. An arithmetical formula to be used in each case is stipulated, which engages one of the basic dimensions of the object (breadth, length, or perimeter/circumference). All twelve rāśis, except the eighth (vṛścika) are auspicious.

Mīna is one of the eighty-four Siddhas associated with eighty-four Yogic postures (āsanas), according to popular tradition in Jodhpur, Rājasthān. These posture-performing Siddhas are drawn from illustrative sources known as the Nava-nātha-caurāsī-siddha from Vȧrāṇasī and the Nava-nātha-caruāsī-siddha-bālāsundarī-yogamāyā from Puṇe. They bear some similarity between the eighty-four Siddhas painted on the walls of the sanctum of the temple in Mahāmandir.

The names of these Siddhas (e.g., Mīna) to 19th-century inscription on a painting from Jodhpur, which is labelled as “Maharaja Mansing and eighty-four Yogis”. The association of Siddhas with yogis reveals the tradition of seeing Matsyendra and his disciple Gorakṣa as the founders of haṭhayoga.

Mīna (मीन) refers to the sign of Pisces, according to the Bṛhatsaṃhitā (chapter 5), an encyclopedic Sanskrit work written by Varāhamihira mainly focusing on the science of ancient Indian astronomy astronomy (Jyotiṣa).—Accordingly, “If the sun and moon should begin to be eclipsed when only half risen, deceitful men will suffer as well as sacrificial rites. [...] If they should be eclipsed when in the sign of Aquarius (Kumbha), hill men, men of western countries, carriers, robbers, shephards, serpents, worthy men, lions, citizens and the people of Barbara will perish. If when in the sign of Pisces (Mīna), the products of the sea beach and of the sea, man of respectability and of learning and persons that live by water will suffer. Also those provinces will be affected which correspond to particular lunar mansions in which the eclipses happen to occur, as will be explained in the chapter (14) on Kūrmavibhāga”.

1) Mīna (मीन) refers to Matsyendranātha, according to the second recension of the Yogakhaṇḍa of the Manthānabhairavatantra, a vast sprawling work that belongs to a corpus of Tantric texts concerned with the worship of the goddess Kubjikā.—Accordingly, as Śrīnātha (i.e., Bhairava) said to the Goddess: “[...] Once the scripture of (that) mountain (śilāgama) [i.e., the mountain (śilā) (of the Triangle)] , Kula and Kaula was worshipped there with devotion, the great goddess was worshipped and lauded by men and the rest. The one called Mīna (i.e. Matsyendranātha) was present there. He became fully accomplished (siddha) there in that House”.

2) Mīna (मीन) refers to one of the disciples of Śrīkaṇṭha, who is associated with Kāmarūpa, one of the sacred seats (pīṭha), according to the Manthānabhairavatantra.—The colophons of the version of the Śrīmatottara called Gorakṣasaṃhitā declare that the Kubjikā tradition (the Kādibheda) of the Kulakaulamata was brought down to earth by him. Thus like the Siddhas of the previous Ages, Śrīkaṇṭha also had disciples [i.e., Mīna]. These were the Lords of the Ages who are said to be four aspects of the First Siddha who descend into the world in the last Age, each into a ‘particular division’.

Mīna (मीन) or Mīnanātha is another name for Matsyendranātha, one of the “four Lords (teachers) of the Ages” (Yuganātha).—Matsyendranātha is worshipped as the teacher of this Age along with three other teachers and their consorts who brought the Kaula Tantra into the world in the previous three Ages. These four Lords of the Ages (yuganātha) are highly revered in the Kālīkrama and came to be considered to be embodiments of the basic states of consciousness. Matsyendranātha has a variety of cognate names [e.g., Mīnanātha] (Cf. Dyczkowski 1988: 163 n23 and Bagchi 1934: 9).

Mīna (मीन) is the name of a Rāśi (zodiac sign) mentioned as attending the teachings in the 6th century Mañjuśrīmūlakalpa: one of the largest Kriyā Tantras devoted to Mañjuśrī (the Bodhisattva of wisdom) representing an encyclopedia of knowledge primarily concerned with ritualistic elements in Buddhism. The teachings in this text originate from Mañjuśrī and were taught to and by Buddha Śākyamuni in the presence of a large audience (including Mīna).

Mīna (मीन) refers to one of the various types of cakes mentioned in Chapter 12 (“offering food”) of the Susiddhikara-sūtra. Accordingly, “Offer [viz., mīna cakes], [...]. Cakes such as the above are either made with granular sugar or made by mixing in ghee or sesamum oil. As before, take them in accordance with the family in question and use them as offerings; if you offer them up as prescribed, you will quickly gain success. [...]”.

When you wish to offer food [viz., mīna cakes], first cleanse the ground, sprinkle scented water all around, spread out on the ground leaves that have been washed clean, such as lotus leaves, palāśa (dhak) leaves, and leaves from lactescent trees, or new cotton cloth, and then set down the oblatory dishes. [...] First smear and sprinkle the ground and then spread the leaves; wash your hands clean, rinse out your mouth several times, swallow some water, and then you should set down the food [viz., mīna]. [...]

Mina is the name of a tank mentioned Mihintale tablets of Mahinda IV (956-972). It represents a locality that once existed in the ancient kingdom of Anurādhapura, Ceylon (Sri Lanka).

2) the sign of the zodiac Pisces, [Rāmāyaṇa; Varāha-mihira’s Bṛhat-saṃhitā; Purāṇa]

Mīna (मीन) in the Sanskrit language is related to the Prakrit word: Mīṇa.

Mīṇa (मीण) in the Prakrit language is related to the Sanskrit word: Mīna.

2) [noun] a set of two similar things considered as a unit; a pair.

3) [noun] (astron.) a large faint zodiacal constellation; between Aquarius and Aries; the Pisces.

4) [noun] the twelfth sign of the zodiac; the Pisces.

Chapter 6 - The rules for erecting gnomoms and pegs

Chapter 37 - The opening of the dwelling house (gṛha-praveśa)