Mauli means something in Hinduism, Sanskrit, Marathi, Jainism, Prakrit, Hindi. If you want to know the exact meaning, history, etymology or English translation of this term then check out the descriptions on this page. Add your comment or reference to a book if you want to contribute to this summary article. 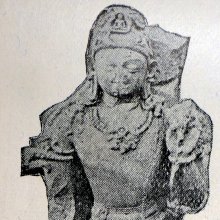 Mauli (मौलि):—The commonly known Sanskrit name for the head-gear is Mauli. There are various well-known varieties of head-gear such as:

And the minor varieties thereof are:

In the formation of these minor varieties, the plaits of hair are bound by what are called

Mauli (मौलि) refers to “crest” and is used to describe Śiva, according to the Śivapurāṇa 2.3.20 (“The story of the submarine fire”).—Accordingly, as Nārada said to Brahmā: “O Brahmā, please tell me “Where did the flame of fire emerging from the eye of Śiva go?” Please tell me also the further story of the moon-crested lord [i.e., śaśin-mauli]”.

Maulī (मौली) refers to a type of mask (pratiśiras) or crown, prescribed for the middling gods (as opposed to superioir or inferior) and kings, according to Nāṭyaśāstra chapter 23. It is also known by the name Mastakī. Providing masks is a component of nepathya (costumes and make-up) and is to be done in accordance with the science of āhāryābhinaya (extraneous representation).

Mauli [मौली] in the Hindi language is the name of a plant identified with Raphanus sativus from the Brassicaceae (Mustard) family. For the possible medicinal usage of mauli, you can check this page for potential sources and references, although be aware that any some or none of the side-effects may not be mentioned here, wether they be harmful or beneficial to health.

Mauli (मौलि) is a Sanskrit technical term referring to the “head”, and is dealt with in the 17th-century Vaidyavallabha written by Hastiruci.—The Vaidyavallabha is a work which deals with the treatment and useful for all 8 branches of Ayurveda. The text Vaidyavallabha (mentioning mauli) has been designed based on the need of the period of the author, availability of drugs during that time, disease manifesting in that era, socio-economical-cultural-familial-spiritual-aspects of that period Vaidyavallabha.

Mauli (मौलि) refers to “crowns (studded with jewels)”, according to the King Vatsarāja’s Pūjāstuti called the Kāmasiddhistuti (also Vāmakeśvarīstuti), guiding one through the worship of the Goddess Nityā.—Accordingly, “[...] O mother! Even the kings of gods bow to the feet of those men who have acquired a drop of the grace of seeing you. Kings of all the rich lands extending to the four oceans [bow to them] all the more, illuminating their footrests with the studded jewels of their elevated crowns (mauli-maṇi)”.

Mauli (मौलि) in the Sanskrit language is related to the Prakrit word: Mauli.

Mauli (मौलि):—(nm) the crown of the head, diadem; summit; (a) best, foremost, most outstanding.

1) Mauli (मौलि) in the Prakrit language is related to the Sanskrit word: Mukulin.

3) [noun] a head-dress, usu. of gold and jewels, worn by king, as a symbol of authority; a crown.

Canto CVII - Hymn to the Sun

Canto LIX - The description of the Earth (continued)