Mata means something in Buddhism, Pali, Hinduism, Sanskrit, Jainism, Prakrit, the history of ancient India, Marathi, Hindi. If you want to know the exact meaning, history, etymology or English translation of this term then check out the descriptions on this page. Add your comment or reference to a book if you want to contribute to this summary article. 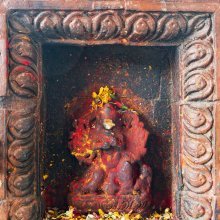 Mātā means mother. The prefix Śrī is important here. Śrī (श्री) represents the highest form of motherhood. The human mothers can take care of their children with love and affection. But they cannot remove the miseries and sufferings of their loved ones, which they are destined to undergo.

Mata (मत) refers to the “point of view” (of a particular system of philosophy), according to the Śivapurāṇa 2.3.13 (“Śiva-Pārvatī dialogue”).—Accordingly, after Pārvatī spoke to Śiva: “On hearing these words of Pārvatī based on the Sāṃkhya system, Śiva replied to her, upholding the Vedāntin’s point of view [i.e., vedānta-mata-saṃstha].—[...]”.

1) Mātā (माता) is another name for Ākhukarṇī, a medicinal plant identified with Ipomoea reniformis, synonym of Merremia emarginata (kidney leaf morning glory) from the Convolvulaceae or “morning glory family” of flowering plants, according to verse 3.67-68 of the 13th-century Raj Nighantu or Rājanighaṇṭu. The third chapter (guḍūcyādi-varga) of this book contains climbers and creepers (vīrudh). Together with the names Mātā and Ākhukarṇī, there are a total of twenty Sanskrit synonyms identified for this plant.

2) Mātā (माता) is also mentioned as a synonym for Indravāruṇī, a medicinal plant identified with Citrullus colocynthis (colocynth, bitter apple or desert gourd) from the Cucurbitaceae or “gourd family” of flowering plants, according to verse 3.70-72.

3) Mātā (माता) is also mentioned as a synonym for Mahāśrāvaṇī, an unidentified medicinal plant, according to verse 5.19-21. The fifth chapter (parpaṭādi-varga) of this book enumerates sixty varieties of smaller plants (kṣudra-kṣupa). Together with the names Mātā and Mahāśrāvaṇī, there are a total of eight Sanskrit synonyms identified for this plant.

[«previous (M) next»] — Mata in Tibetan Buddhism glossary
Source: academia.edu: The Structure and Meanings of the Heruka Maṇḍala

Mātā (माता) is the name of a Ḍākinī who, together with the Vīra (hero) named Māta forms one of the 36 pairs situated in the Agnicakra, according to the 10th century Ḍākārṇava chapter 15. Accordingly, the agnicakra refers to one of the three divisions of the saṃbhoga-puṭa (‘enjoyment layer’), situated in the Herukamaṇḍala. The 36 pairs of Ḍākinīs [viz., Mātā] and Vīras are red in color; they each have one face and four arms; they hold a skull bowl, a skull staff, a small drum, and a knife.

Mātā (माता) refers to “mother” and represents one of the eight classes of female ancestors entitled to śrāddha.—(The 5 samitis and 3 guptis are compared to the eight ‘mothers’).—Cf. Saṃskārakaustubhaprārambha, p. 24a, line 4.

Mata.—cf. guru-mata (CII 1), ‘a matter considered to be serious’. (LP), a signature; cf. the use of the word with the signature as in mataṃ mama amukasya found copied in many copper-plate grants. Note: mata is defined in the “Indian epigraphical glossary” as it can be found on ancient inscriptions commonly written in Sanskrit, Prakrit or Dravidian languages.

6) Meditated upon, thought of, perceived, recognised.

Mata (मत) in the Sanskrit language is related to the Prakrit words: Manniya, Maya, Māia, Māya.

1) [noun] a religious institution usu. headed by a monk.

2) [noun] a place or institution for teaching and learning; a school.

1) [noun] a belief or judgement that rests on grounds insufficient to produce complete certainty; an opinion.

2) [noun] a personal view, attitude or appraisal; an opinion.

3) [noun] anything intended or planned; aim, end or purpose; intention.

5) [noun] any specific system of belief and worship, often involving a code of ethics and a philosophy; a religion.

6) [noun] theory or logical analysis of the principles underlying conduct, thought, knowledge, and the nature of the universe; philosophy.

7) [noun] a decision by a individual on a proposal, resolution, bill, etc. or a choice between candidates for office, expressed by written ballot, voice, show of hands, etc.; a vote.

1) [noun] that which is done, acomplished; a work done.

2) [noun] the act or process of constructing; construction.

3) [noun] the way in which something is constructed; manner or method of building.

4) [noun] the character of a woven fabric as determined by the arrangement, size, quality, etc. of the fabric’s threads; texture.

5) [noun] the shape, outline or configuration of anything; structure as apart from color, material, etc.; the form.

7) [noun] the act or process of decorating; decoration.

8) [noun] behaviour of a woman intended to excite admiration or love in men merely for the sake of vanity or mischief; flirtation; coquetry.

9) [noun] the quality or fact of each of the constitute elements or parts being proportional to each other and to the whole.

12) [noun] the art of producing illusions as entertainment by the use of sleight of hand, deceptive devices, etc.; magic.

13) [noun] that which is made by human beings, as diff. from the natural one; an artificial thing.

Verse 4.12.8 < [Chapter 12 - The Story of the Gopīs That In the Holi Festival Displayed Three Transcendental Virtues]