Manmatha means something in Hinduism, Sanskrit, Jainism, Prakrit, Marathi, Hindi, biology. If you want to know the exact meaning, history, etymology or English translation of this term then check out the descriptions on this page. Add your comment or reference to a book if you want to contribute to this summary article.

Alternative spellings of this word include Manmath. 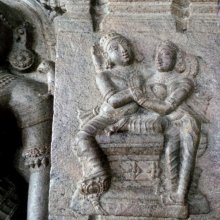 Manmatha (मन्मथ) is the one of the names of Kāma, according to the Śivapurāṇa 2.2.3.—“[...] The Brahmins Marīci and others, my sons, decided on suitable names for the Being and said thus”. The sages said:—“Since at your nativity itself you have begun to torment and bedevil our minds and that of Brahmā too, you will be famous in the world as Manmatha”.

1) Manmatha (मन्मथ).—(Kāma); God of Love;1 on the third Parva of the Geyacakra;2 recreated by Lalitā, who said he was her son; went to Śiva's abode accompanied by his friend Vasanta.3 Got burnt by Śiva and in effecting his revival Māyavatī (Ratī) deluded Śambara by her charms; she brought up Pradyumna who was a part of the Love God.4

[«previous (M) next»] — Manmatha in Vastushastra glossary
Source: Shodhganga: Temples of Salem region Up to 1336 AD

Manmatha (मन्मथ).—Sculptures of Manmatha and Rati are found at many temples in the region. They are the representations of love and sexual pleasure. Their grace is supposed to be necessary for the fulfillment of the third Puruṣārtha of a man i.e. Kāma, according to the Hindu tradition. Therefore, for gaining satkāma (love and lust in the right path) they are worshipped.

The sculptures of this couple are found in many temples, especially in the Śaiva temples. Texts prescribe that the sculptures of Manamtha and Rati should be carved with great luster and ornamentation. They are shown as two-handed. Manmatha holds the bow made of sugarcane in his left hand and the arrows made of five flowers in his right. He must be shown as embracing his wife in the left hand. Rati must be depicted as a young lady with a voluptuous body. She should be decked with various ornaments. The mount of Manmatha is the parrot.

Manmatha (मन्मथ) refers to the twenty-ninth of the sixty-year cycle of Jupiter, according to the Bṛhatsaṃhitā (chapter 8), an encyclopedic Sanskrit work written by Varāhamihira mainly focusing on the science of ancient Indian astronomy astronomy (Jyotiṣa).—Accordingly, “The five years of the next yuga are—1. Nandana, 2. Vijaya, 3. Jaya, 4. Manmatha, 5. Durmukha: during the first three years there will be happiness in the land; in Manmatha mankind will feel neither happy, nor miserable and in the year Durmukha they will feel miserable”.

Manmatha (मन्मथ) refers to the twenty-ninth saṃvatsara (“jovian year)” in Vedic astrology.—If there is birth in the ‘samvatsara’ of ‘manmatha’, the native is adorned with ornament of special kind, gets sensuous pleasure with woman, is sweet-spoken, always remains engaged in singing and dancing and is voluptuous (one who enjoys the pleasures of the senses).

According with Jataka Parijata, the person born in the year manmatha (2015-2016 AD) will have a craving for sensual enjoyment and will be victorious over his foes.

Manmatha (मन्मथ) participated in the war between Rāma and Rāvaṇa, on the side of the latter, as mentioned in Svayambhūdeva’s Paumacariu (Padmacarita, Paumacariya or Rāmāyaṇapurāṇa) chapter 57ff. Svayambhū or Svayambhūdeva (8th or 9th century) was a Jain householder who probably lived in Karnataka. His work recounts the popular Rāma story as known from the older work Rāmāyaṇa (written by Vālmīki). Various chapters [mentioning Manmatha] are dedicated to the humongous battle whose armies (known as akṣauhiṇīs) consisted of millions of soldiers, horses and elephants, etc.

manmatha (मन्मथ).—m (S Stirrer or agitater of the heart.) A name of the Hindu Cupid.

manmatha (मन्मथ).—m A name of the Hindu Cupid.

Manmatha (मन्मथ).—[masculine] love or the god of love (lit. the shaker or agitator).

Mānmatha (मान्मथ).—[feminine] ī relating to love or the god of love.

4) Name of a physician and various other men, [Catalogue(s)]

2) [noun] the twenty nineth year in the Hindu cycle of sixty years.