Jatamukuta means something in Buddhism, Pali, Hinduism, Sanskrit. If you want to know the exact meaning, history, etymology or English translation of this term then check out the descriptions on this page. Add your comment or reference to a book if you want to contribute to this summary article. 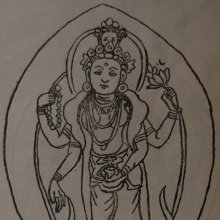 [«previous (J) next»] — Jatamukuta in Shilpashastra glossary
Source: Google Books: The Book of Hindu Imagery: Gods, Manifestations and Their Meaning

A crown of artfully plaited braids, which is reminiscent of the shape of the kiritamukuta, and is often just as lavishly decorated. Jatamukuta is the crown of an ascetic. It is worn particularly by Shiva (though in fact not when he is depicted as an ascetic), with a sickle or skull as the characteristic ornament, and by Brahma, decorated with jewels.

The Jaṭāmukuṭa (जटामुकुट) is, as the name indicates, made up of twists of matted hair done into the form of a tall cap. The Uttara-kāmikāgama gives the following rather long and somewhat unitelligible description of the uṣṇīṣa in which the Jaṭāmukuṭa is included.

“The Jaṭāmukuṭa is in fact as described below: five jaṭās or braids of matted hair are taken and tied into a know three inches in height ny coiling them into one or three loops, the remaining braids being bound and taken through to be left hanging on both sides”

Jaṭāmukuṭa (जटामुकुट) refers to a “crown of matted hair”, which is the prescribed appearance for Munis, according to Nāṭyaśāstra chapter 23. It is composed of the words kuñcita (curved) and mūrdhaja (hair of the head). Providing masks is a component of nepathya (costumes and make-up) and is to be done in accordance with the science of āhāryābhinaya (extraneous representation).

“Jaṭāmukuṭa is four-armed and one-faced, the head on the top representing the head of Amitābha. The two right hands show the rosary and the Varada pose, while the two left hold the lotus and the water-pot. He is represented in a standing attitude”.

The names of the 108 deities [viz., Jaṭāmukuṭa] possbily originate from a Tantra included in the Kagyur which is named “the 108 names of Avalokiteshvara”, however it is not yet certain that this is the source for the Nepali descriptions.