Simhanada means something in Buddhism, Pali, Hinduism, Sanskrit, Jainism, Prakrit, Marathi. If you want to know the exact meaning, history, etymology or English translation of this term then check out the descriptions on this page. Add your comment or reference to a book if you want to contribute to this summary article. 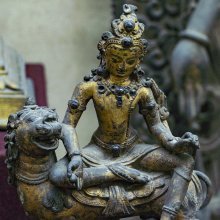 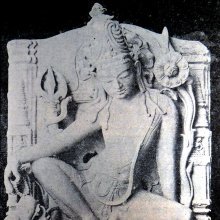 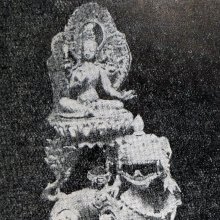 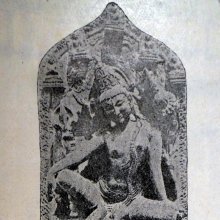 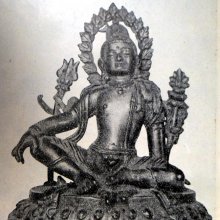 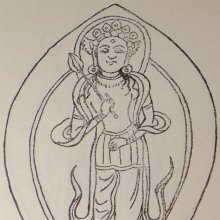 Siṃhanāda (सिंहनाद):—The small whistle worn on a thread around the neck by Gorakhnāthī Yogīs is called Siṃhanāda (according to the Siddhasiddhāntapaddhati)

Siṃhanāda (सिंहनाद) refers to a “lion’s roar”, according to the Śivapurāṇa 2.2.37. Accordingly:—“[...] mentally meditating on Śiva, the remover of all adversities and seated in his divine chariot, the powerful Vīrabhadra took up all the great miraculous weapons for his fight with Viṣṇu and roared like a lion (siṃhanāda) [...] The guardians of the quarters including Indra roared like lions (siṃhanāda) and fought forcefully with the Gaṇas of Vīrabhadra”.

Siṃhanāda (सिंहनाद).—Through the horns of the deer, the Siddhas used to make a sound which is similar to the roar of lion (siṃhanāda). However, sometimes these depictions of deer horns are misinterpreted as ‘Chillums’ which are used to smoke gañja (a dried leaf which will have an intoxicating effect when its smoke is inhaled).

Siṃhanāda (सिंहनाद) is the name of an Ayurvedic recipe defined in the fourth volume of the Rasajalanidhi (chapter 2, dealing with jvara: fever). These remedies are classified as Iatrochemistry and form part of the ancient Indian science known as Rasaśāstra (medical alchemy). However, as an ayurveda treatment, it should be taken twith caution and in accordance with rules laid down in the texts.

Accordingly, when using such recipes (e.g., siṃhanāda-rasa): “the minerals (uparasa), poisons (viṣa), and other drugs (except herbs), referred to as ingredients of medicines, are to be duly purified and incinerated, as the case may be, in accordance with the processes laid out in the texts.” (see introduction to Iatro chemical medicines)

The story of Siṃhanāda was narrated by the Vidyādhara king Vajraprabha to prince Naravāhanadatta in order to relate how “Sūryaprabha, being a man, obtain of old time the sovereignty over the Vidyādharas”.

The Kathāsaritsāgara (‘ocean of streams of story’), mentioning Siṃhanāda, is a famous Sanskrit epic story revolving around prince Naravāhanadatta and his quest to become the emperor of the vidyādharas (celestial beings). The work is said to have been an adaptation of Guṇāḍhya’s Bṛhatkathā consisting of 100,000 verses, which in turn is part of a larger work containing 700,000 verses.

Simhanada (सिंहनाद): A lion-note or roar; a deep roar of defiance or triumph which warriors were wont to utter to inspire confidence in their friends, of terror in their enemies.

Siṃhanāda (सिंहनाद) refers to the “lion’s roar of Śāriputra”, according to Mahāprajñāpāramitāśāstra chapter XLIX. According to the Nidānasaṃyukta: “[...] then a certain Bhikṣu went to where the Buddha was, and, having gone there, he bowed to the Buddha’s feet and stood to one side; standing to one side, he said to the Buddha: Lord, a noble speech, a bull’s speech, a categorical statement, was made by Śāriputra, and in the assembly he uttered a real lion’s roar (siṃhanāda), saying: While I was ignorant of his meaning…, etc. [The Buddha replied]: Truly, the dharmadhātu has been well penetrated by the Bhikṣu Śāriputra”.

Notes: The Bhikṣu who denounced to the Buddha what he believed to be Śāriputra’s boasting was named Kaḷāra: cf. Samyutta, II, p. 50.

1) Siṃhanāda (सिंहनाद) or Siṃhanādalokeśvara refers to one of the various forms of Avalokiteśvara having their Sādhana described in the 5th-century Sādhanamālā (a collection of sādhana texts that contain detailed instructions for rituals).—His Āsana is the mahārājalīlā; his Vāhana is the lion; his Symbols are (i) the sword on lotus, (ii) triśūla entwined by a snake.

The Dhyāna (meditation instructions) of Siṃhanāda is described in the Sādhanamālā as follows:

“The worshipper should think himself as Siṃhanāda Lokeśvara of white complexion, with three eyes, and the jaṭāmukuṭa (crown of matted hair). He is without ornaments, is clad in tiger-skin, and sits on a lion in the attitude of princely ease. He is seated on the orb of the moon and is radiant like her. In his right there is a white trident entwined by a white snake, and in his left there is a lotus-bowl full of fragrant flowers. From his left hand rises a lotus on which there is a sword burning like fire”.

“Siṃhanāda is similar to [Piṇḍapātra Lokeśvara], but here the god holds the chowrie against his shoulder with his right hand while the empty left rests near his navel.—Piṇḍapātra Lokeśvara is one-faced and two-armed and stands on a lotus. He holds the Piṇḍapātra (the bowl) in his two hands near the navel”.

The names of the 108 deities [viz., Siṃhanāda] possbily originate from a Tantra included in the Kagyur which is named “the 108 names of Avalokiteshvara”, however it is not yet certain that this is the source for the Nepali descriptions.

Siṃhanāda (सिंहनाद) participated in the war between Rāma and Rāvaṇa, on the side of the latter, as mentioned in Svayambhūdeva’s Paumacariu (Padmacarita, Paumacariya or Rāmāyaṇapurāṇa) chapter 57ff. Svayambhū or Svayambhūdeva (8th or 9th century) was a Jain householder who probably lived in Karnataka. His work recounts the popular Rāma story as known from the older work Rāmāyaṇa (written by Vālmīki). Various chapters [mentioning Siṃhanāda] are dedicated to the humongous battle whose armies (known as akṣauhiṇīs) consisted of millions of soldiers, horses and elephants, etc.

siṃhanāda (सिंहनाद).—m (S) The roar of the lion. Hence 2 The war-whoop or war-cry; roaring or shouting upon making the onset: also any loud and terrific roar or cry: also a deep, hollow, and solemn sound (as in caverns or temples).

siṃhanāda (सिंहनाद).—m The roar of the lion. A deep sound.

(-daḥ) A war-cry, war-hoop, shouting or roaring upon making an onset. E. siṃha a lion, and nāda cry.

IV. Epithet ‘great’ refused for the wisdom of the Buddhas < [Chapter XLII - The Great Loving-kindness and the Great Compassion of the Buddhas]