Padmanartteshvara means something in Buddhism, Pali. If you want to know the exact meaning, history, etymology or English translation of this term then check out the descriptions on this page. Add your comment or reference to a book if you want to contribute to this summary article. 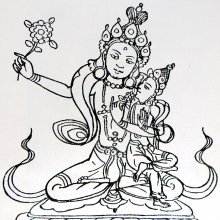 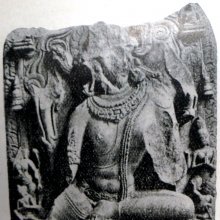 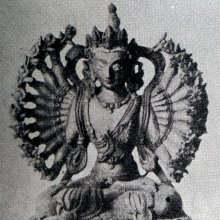 Padmanartteśvara (पद्मनर्त्तेश्वर) or Padmanartteśvaralokeśvara refers to one of the various forms of Avalokiteśvara having their Sādhana described in the 5th-century Sādhanamālā (a collection of sādhana texts that contain detailed instructions for rituals).—Three Sādhanas in the Sādhanamālā are devoted to the worship of this variant of Avalokiteśvara, all entirely different and describing three widely different forms of the deity.

“The worshipper should think himself as Bhaṭṭāraka Avalokiteśvara in the form of Padmanartteśvara, who is one-faced and eighteen-armed. He stands in the ardhaparyaṅka attitude, and on his jaṭāmukuṭa there is an effigy of Amitābha. He carries the double lotus in all his (eighteen) hands and is surrounded by a host of Yoginīs. His right and left sides are occupied by Tārā, Sudhana, Bhṛkuṭī and Hayagrīva. He is decked in all kinds of divine ornaments and dress”.

[As the word “nartteśvara” means the “God of Dance” or the “God in a dancing attitude” the Āsana of Padmanartteśvara may be taken as the dancing variety of ardhaparyaṅka, and this is borne out by the fact that the Nepal image shows the god in this particular attitude.]

“The worshipper should think himself as Padmanartteśvara, who is seated on an animal, is two-armed and one-faced. His colour is red, and he is decked in all kinds of ornaments; he bears the effigy of Amitābha on the crown and is embraced by Pāṇḍaravāsinī in the left. His left hand, which carries the lotus, is raised in the act of embracing (the Śakti), while the right shows the Sūcīmudrā in the act of dancing.”

[The same Sādhana which contains the Dhyāna quoted above, gives a description of the Maṇḍala, and adds the information that the lotus on which the god sits has eight petals. The petals contain one goddess each. For instance:

On the East petal there is Vilokinī, white in colour and carrying the red lotus.
The South is occupied by Tārā of green colour, holding the Palāśa and the lotus flowers.
Bhūriṇī is in the West, is yellow in complexion and carries the Cakra and the blue lotus.
Bhṛkuṭī is in the North, with white colour holding the yellow lotus.
In the North-East there is Padmavāsinī, who is yellow in colour and holds the red lotus.
The South-East is occupied by Viśvapadmeśvarī, who is sky-coloured and holds the white lotus.
The South-West is occupied by Viśvapadmā, who is white and carries the the black lotus.
In the Norh-West there is Viśvavajrā of variegated colour holding the double lotus.]

“Here the worshipper should think himself as Padmanatteśvara,on the moon over the double-lotus, originating from the sacred syllable Hrīḥ. He is red in colour with one face, the jaṭāmukuṭa, three eyes and eight arms. He is decked in all sorts of ornaments, wears the sacred thread of a snake, and dances in the ardhaparyaṅka attitude. The first pair of hands exhibits the dancing pose; the second right shows the sūcimudrā against the chest, the second left holds a red lotus over his head; the third pair carries the staff and the triśūla, stamped with the vajra; while the fourth pair carries the rosary and the water-pot. The principal god is surrounded by eight goddesses. In such a manner the god Padmanartteśvara Lokanātha should be meditated upon”.