Lokanatha means something in Buddhism, Pali, Hinduism, Sanskrit, Marathi. If you want to know the exact meaning, history, etymology or English translation of this term then check out the descriptions on this page. Add your comment or reference to a book if you want to contribute to this summary article. 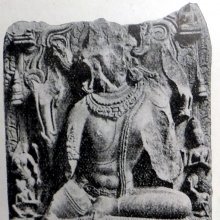 Lokanātha (लोकनाथ) refers to one of the various Vibhava manifestations according to the Īśvarasaṃhitā 24.300-302.—Accordingly, “who has wide eyes is saluted by all gods, occupies a good throne and has the eyes closed in meditation. He is seated on a lotus (or in the padmāsana posture), is of a complexion comparable to the inferior of the lotus and has his intellect filled with sympathy. His hands bear the (marks of) conch and lotus. He proclaims (shows) the three courses of knowledge, detachment and good dharma”

These Vibhavas (e.g., Lokanātha) represent the third of the five-fold manifestation of the Supreme Consciousness the Pāñcarātrins believe in.

Lokanātha (लोकनाथ) or Lokanātharasa is the name of an Ayurvedic recipe defined in the fourth volume of the Rasajalanidhi (chapter 7, enlargement of spleen [plīhodara] and liver [yakṛdudara]). These remedies are classified as Iatrochemistry and form part of the ancient Indian science known as Rasaśāstra (medical alchemy). However, since it is an ayurveda treatment it should be taken with caution and in accordance with rules laid down in the texts.

Accordingly, when using such recipes (e.g., lokanātha-rasa): “the minerals (uparasa), poisons (viṣa), and other drugs (except herbs), referred to as ingredients of medicines, are to be duly purified and incinerated, as the case may be, in accordance with the processes laid out in the texts.” (see introduction to Iatro chemical medicines)

Lokanātha (लोकनाथ) is a synonym for the Buddha according to the 2nd century Mahāprajñāpāramitāśāstra (chapter IV). Lou kia na t’a (Lokanātha) in the language of Ts’in means “protector of the world”.

Lokanātha (लोकनाथ) refers to the “protector of the world”, according to the Gaganagañjaparipṛcchā: the eighth chapter of the Mahāsaṃnipāta (a collection of Mahāyāna Buddhist Sūtras).—Accordingly: “[...] The Bodhisattva Dharmarāja and the whole congregation, having joined the palms of their hands, paid homage to open space, and sat down. Then, by the magical presence of the Bodhisattva Gaganagañja, these verses resonated in open space: ‘[...] (142) Just as the open space cannot be filled up with even all beings, so the series of thoughts also cannot be filled up with all objects of sense. (143) The great words with the lion’s roar, the words given by the protector of the world (lokanātha), and the supermundane insight, you should find satisfaction in these teachings. [...]’”.

Lokanātha (लोकनाथ) is the name of a Bodhisattva mentioned as attending the teachings in the 6th century Mañjuśrīmūlakalpa: one of the largest Kriyā Tantras devoted to Mañjuśrī (the Bodhisattva of wisdom) representing an encyclopedia of knowledge primarily concerned with ritualistic elements in Buddhism. The teachings in this text originate from Mañjuśrī and were taught to and by Buddha Śākyamuni in the presence of a large audience (including Lokanātha).

Lokanātha (लोकनाथ) or Lokanāthalokeśvara refers to one of the various forms of Avalokiteśvara having their Sādhana described in the 5th-century Sādhanamālā (a collection of sādhana texts that contain detailed instructions for rituals).—His Colour is white; his Symbol is the lotus; his Mudrā is the varada.—Four Sādhanas are devoted to the worship of the Lokanātha form of Avalokiteśvara. He is single in three Sādhanas and only one Sādhana describes him as accompanied by Tārā and Hayagrīva.

The Dhyāna (meditation instructions) of Lokanātha is described in the Sādhanamālā as follows:

“Following the same procedure as before, the worshipper should think himself as Lokanātha, resplendent like the moon, as springing from the sacred syllable Hrīḥ and wearing the jaṭāmukuṭa. He has within his matted hair the figure of the god, Vajradharma, is the destroyer of all diseases, exhibits the varada-mudrā in the right hand and carries the lotus in the left. He sits in the lalita attitude, is peaceful and resplendent. To his right is Tārā, who has a peaceful appearance, exhibits the varada-mudrā and carries the lotus. To the left is Hayagrīva, who displays the gesture of bowing and carries the staff in his two hands. He is red in colour, appears terrible and is clad in the garment of tiger-skin”.

Later, the Sādhana adds an account of the deities constituting the Lokanātha-maṇḍala:—

Lokanātha (लोकनाथ) is the name of a Vīra (hero) who, together with the Ḍākinī named Lokanāthī forms one of the 36 pairs situated in the Hṛdayacakra, according to the 10th century Ḍākārṇava chapter 15. Accordingly, the hṛdayacakra refers to one of the four divisions of the sahaja-puṭa (‘innate layer’), situated within the padma (lotus) in the middle of the Herukamaṇḍala. The 36 pairs of Ḍākinīs and Vīras [viz., Lokanātha] are reddish yellow in color; they each have one face and four arms; they hold a skull bowl, a skull staff, a small drum, and a knife.

Note: lokanātha is a Pali compound consisting of the words loka and nātha.

lōkanātha (लोकनाथ).—m (S) A particular medicinal preparation. 2 (Lord of the people.) A term for God or for a king.

Lokanātha (लोकनाथ).—frequent as epithet of the historic Buddha, as in Pali, e.g. Lalitavistara 97.16; in Sādhanamālā (29.17 etc.) n. or epithet of a Buddha; it is not clear that Śākyamuni is meant, tho he may be.

(-thaḥ) 1. A sovereign of the universe. 2. One of the Jaina or Bauddh'ha saints. E. loka the world, nātha lord.

1) [noun] the lord of all the worlds; the Supreme Being.

2) [noun] the Buddha, the founder of Buddhism.