Ari means something in Buddhism, Pali, Hinduism, Sanskrit, the history of ancient India, Marathi, Jainism, Prakrit, Hindi, biology. If you want to know the exact meaning, history, etymology or English translation of this term then check out the descriptions on this page. Add your comment or reference to a book if you want to contribute to this summary article.

Alternative spellings of this word include Aari. 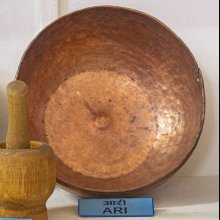 [«previous (A) next»] — Ari in Arthashastra glossary
Source: Shodhganga: Kakati Ganapatideva and his times (artha)

Ari refers to “the enemy” and represents one of the twelve categories of the maṇḍala system laid out by Kauṭilya (4th century BCE) and Kāmandaka (7th century A.D.). These twelve cateogires of state can be broadly applied to Gaṇapatideva  (r. 1199-1262 A.D.) and the Kākatīya empire. The enemy was the Velanāṭi-coḍas who were controlling entire coastal Āndhra.

[«previous (A) next»] — Ari in Vyakarana glossary
Source: Wikisource: A dictionary of Sanskrit grammar

[«previous (A) next»] — Ari in Ayurveda glossary
Source: Wisdom Library: Local Names of Plants and Drugs

Ari [अरि] in the Sanskrit language is the name of a plant identified with Senegalia pennata (L.) Maslin from the Mimosaceae (Touch-me-not) family having the following synonyms: Mimosa pennata, Acacia pendata, Acacia pennata. For the possible medicinal usage of ari, you can check this page for potential sources and references, although be aware that any some or none of the side-effects may not be mentioned here, wether they be harmful or beneficial to health.

Ari in the Malayalam language is the name of a plant identified with Oryza sativa L. from the Poaceae (Grass) family.

Ari (अरि) refers to “enemy” or “stranger”, and is mentioned in verse 2.24 of the Aṣṭāṅgahṛdayasaṃhitā (Sūtrasthāna) by Vāgbhaṭa.—Accordingly, “[...] one shall not turn one’s back upon beggars, nor shall one despise or insult (them). One shall excel in beneficence even towards an enemy (ari) intending to do harm”.

Note: Ari (“enemy”) has been translated by dgra-gźan, which is best interpreted as a hendiadys meaning “enemy & stranger”. It may be remembered in this connection that Thieme (Fremdling p. 1 sqq.) has established “stranger” to be the original meaning of Sanskrit ari.

Mitra (मित्र) refers to a “foe”, according to the Ṣaṭsāhasrasaṃhitā, an expansion of the Kubjikāmatatantra: the earliest popular and most authoritative Tantra of the Kubjikā cult.—(Cf. Gahvarāntasthā)—Accordingly, “[...] The divine Transmission (krama) should be told (to such a one,) not to (just anybody) one likes. O goddess, one should tell this, in the proper manner, to one for whom pleasure and pain, gold and iron, friend and foe [i.e., ari-mitra], nectar and poison are the same and, reflecting on the Transmission, observes all the rules of the renouncer. The liberated Kaula (avadhūta) is the best, middling is the householder and the least is the renouncer (naiṣṭhika). This should be told to one who is fit out of all these three; (and) not to any other: this is the Command in the Kula teaching”.

[«previous (A) next»] — Ari in Pancaratra glossary
Source: Universität Wien: Sudarśana's Worship at the Royal Court According to the Ahirbudhnyasaṃhitā

Ari (अरि) refers to “enemies”, according to the Ahirbudhnyasaṃhitā, belonging to the Pāñcarātra tradition which deals with theology, rituals, iconography, narrative mythology and others.—Accordingly, “[This rite] should be employed by utterly glorious Sovereigns when they are in distress—[for this rite] removes the three kinds of sorrow which begin with the one relating to oneself; causes the destruction of all afflictions; is marked by auspiciousness; destroys all enemies (sarva-ari-nāśana); pacifies (i.e. removes unwanted consequences of ritual mistakes etc.); is the cause of triumph; kills the Demons; brings about prosperities; subdues all; bestows the longest of lives; is meritorious; [and] was perfomed by ancient Kings”.

Ari (अरि) represents the number 6 (six) in the “word-numeral system” (bhūtasaṃkhyā), which was used in Sanskrit texts dealing with astronomy, mathematics, metrics, as well as in the dates of inscriptions and manuscripts in ancient Indian literature.—A system of expressing numbers by means of words arranged as in the place-value notation was developed and perfected in India in the early centuries of the Christian era. In this system the numerals [e.g., 6—ari] are expressed by names of things, beings or concepts, which, naturally or in accordance with the teaching of the Śāstras, connote numbers.

Ari (अरि) refers to “enemy”, according to Mahāprajñāpāramitāśāstra (chapter 4).—Accordingly, “[Question: Why is the Buddha called Arhat?]—[Answer]: Ara means enemy (ari) and hat means to kill (han). The expression therefore means ‘killer of enemies’. Some stanzas say: ‘The Buddha has patience (kṣānti) as his armor (varman), Energy (vīrya) as his helmet (śīrṣaka), Discipline (śīla) as his great steed (mahāśva), Dhyāna as his bow (dhanus), Wisdom (prajñā) as his arrows (śara). Outwardly, he destroys the army of Māra (mārasena). Inwardly, he destroys the passions (kleśa), his enemies. He is called Arhat. [...]’.

Ari (“ebony”) is one of the exogamous septs (divisions) among the Kurubas (a tribe of South India). The Kurubas are sub-divided into clans or gumpus, each having a headman or guru called a gaudu, who gives his name to the clan. And the clans are again sub-divided into gotras or septs (viz., Ari).

Ari.—(IE 7-1-2), ‘six’; cf. ari-ṣaḍ-varga. Note: ari is defined in the “Indian epigraphical glossary” as it can be found on ancient inscriptions commonly written in Sanskrit, Prakrit or Dravidian languages.

1) Ari in India is the name of a plant defined with Acacia pennata in various botanical sources. This page contains potential references in Ayurveda, modern medicine, and other folk traditions or local practices It has the synonym Albizia tenerrima de Vriese (among others).

2) Ari is also identified with Bauhinia racemosa It has the synonym Piliostigma racemosum (Lam.) Benth. (etc.).

3) Ari is also identified with Cordia myxa It has the synonym Gerascanthus myxus (L.) Borhidi (etc.).

5) Ari is also identified with Ocimum tenuiflorum It has the synonym Plectranthus monachorum (L.) Spreng. (etc.).

7) Ari is also identified with Plumbago zeylanica It has the synonym Plumbago scandens L. (etc.).

8) Ari in Morocco is also identified with Stipa tenacissima It has the synonym Stipa kelibibae Moraldo, Raffaelli, & Ricceri (etc.).

If you are looking for specific details regarding Ari, for example extract dosage, chemical composition, side effects, health benefits, diet and recipes, pregnancy safety, have a look at these references.

[«previous (A) next»] — Ari in Marathi glossary
Source: DDSA: The Molesworth Marathi and English Dictionary

arī (अरी).—f A cobbler's awl. Pr. gāṇḍīkhālīṃ arī āṇi cāmbhāra pōra mārī Used when people run wildly about to look for what they hold in their hands. 2 An iron spike (as of a playing-top, of a large hand-mill &c.), a goad &c. 3 (Better harī) A line or row (as of trees or standing-crops).

ari (अरि).—m An enemy. arimardana a Enemy- killer or destroyer.

[«previous (A) next»] — Ari in Sanskrit glossary
Source: DDSA: The practical Sanskrit-English dictionary

4) Name of the number six (from the six enemies).

5) Name of a condition in astronomy.

1) A pious or religious man.

Āri is a Sanskrit compound consisting of the terms ā and ri (रि).

Ari (अरि) in the Sanskrit language is related to the Prakrit word: Ari.

[«previous (A) next»] — Ari in Hindi glossary
Source: DDSA: A practical Hindi-English dictionary

1) Ar in Hindi refers in English to:—(nm) a spoke; ray..—ar (अर) is alternatively transliterated as Ara.

Ari (अरि) in the Prakrit language is related to the Sanskrit word: Ari.

1) [verb] to remove or divide into parts with a sharp-edged instrument; to cut off; to sever.

1) [verb] to know; to learn; to understand; to have a clear perception; to be aware of; to get knowledge of or skill in by study, experience, instruction.

1) [noun] the crop (of paddy, rāgi, etc.) reaped, not threshed, but left on the field in handful quantities.

2) [noun] that much handful of reaped crop taken at a time, for threshing.

Ari (ಅರಿ):—[noun] a disease of the eye, with an extra growth inside the eye-lid.

1) [noun] one that is antagonistic to another, esp. one seeking to injure, harm, overthrow; a foe; an enemy.

3) [noun] (astrol.) (in the horoscope) sixth house from the birth place.

Ari (ಅರಿ):—[noun] a circular weapon with sharp blades, a disc.

Ār (ಆರ್):—[verb] to utter a loud, deep, rumbling sound, as a lion or a person in excitement, pain, anger, etc.; to roar.

1) [verb] to be or get satisfied; to get satiated.

1) [pronoun] what or which person or persons.

2) [pronoun] a or the person or persons (used in relative clauses) .