Vihara means something in Buddhism, Pali, Hinduism, Sanskrit, the history of ancient India, Jainism, Prakrit, Hindi. If you want to know the exact meaning, history, etymology or English translation of this term then check out the descriptions on this page. Add your comment or reference to a book if you want to contribute to this summary article.

Alternative spellings of this word include Vihar. 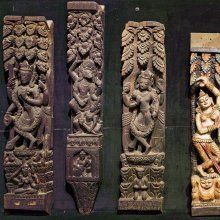 Vihāra (विहार) refers to a “temple”, and in a broader sense represents “devotional place” or “residence of God”. It is one of commonly used names for a temple, as found in Vāstuśāstra literature such the Mayamata and the Mānasāra.

Vihāra (विहार, “monastary”) forms part of the ancient Indian education system, which aimed at both the inner and the outer dimension of a person. Education in India started in the village itself in the home and in the temples. From there the aspiring student moved to gurukulas, centres of learning around great teachers and from there the aspiring scholar went to vihāras and universities.

During the Buddhist period, vihāras (monasteries) emerged as the chief centres of learning. Buddha encouraged the setting up of vihāras, for monks and nuns to meditate and the learned to pursue their quest. Gradually the vihāras grew into centres of education that attracted students from far and wide. The great Indian universities of Nalanda, Vikramasila and Valabhi may have evolved around vihāras and the initiative of creating these came entirely from the society.

Vihāra (विहार) refers to the “sacrificial ground” (where the yajña takes place), as mentioned in the Āpastamba-yajña-paribhāṣā-sūtras.—“All priestly performances take place on the northern side of the Vihāra. The priest should never turn away from the fire, i.e. should never turn his back on the altar. Nor from the Vihāra”.

Vihāra is explained as the sacrificial ground. Upacāra is explained as “adhvaryvādīnāṃ saṃcaraḥ”, and this saṃcara, according to Kātyāyana I, 3, 42, is the path between the Cātvāla and Utkara, the Utkara being on the west, the praṇītās on the east of the Vihāra. Kātyāyana I, 8, 26, expresses the same rule by “uttarata-upacāro yajñaḥ”, the Vihāra being the place where the Yajña takes place.

Vihāra is the Sanskrit and Pali term for a Buddhist monastery. It originally meant “a secluded place in which to walk”, and referred to “dwellings” or “refuges” used by wandering monks during the rainy season. The northern Indian state of Bihar derives its name from the word “vihara”, due to the abundance of Buddhist monasteries in that area.

In the second century BCE a standard plan for a vihara was established. It could be either structural, which was more common in the south of India, or rock-cut like the chaitya-grihas of the Deccan. It consisted of a walled quadrangular court, flanked by small cells. The front wall was pierced by a door, the side facing it in later periods often incorporated a shrine for the image of the Buddha.

Usually, a vihara is constituted by a few lodgings, a sima, a great room where the laity can listen to some teachings, meditate, plan and accomplish some ceremonies, and sometimes with a kitchen and a dining room. A vihara can also appear into the shape of a small house or hut. In this case, we talk about a kuti.

Of these three types of abodes, the Buddha chooses the āryavihāra. But here, out of compassion (anukampa) for beings (sattva), he abides in the city of Rājagṛha.

Vihāra (विहार) refers to a “monastery” (suitable for performing offering ceremonies), according to the Vajratuṇḍasamayakalparāja, an ancient Buddhist ritual manual on agriculture from the 5th-century (or earlier), containing various instructions for the Sangha to provide agriculture-related services to laypeople including rain-making, weather control and crop protection.—Accordingly [as the Bhagavān taught the detailed offering-manual], “At the time of drought one should prepare a maṇḍala with clay and cow dung measuring three hastas on a mountain, in a forest, at a monastery (vihāra), a spring, a pool, a tank, a well, a lake, or the residence of the Nāgas. One should dig a hole measuring a hasta in the middle of the maṇḍalaka. [...]”.

Vihāra (विहार) refers to a “monastery”, according to Kuladatta’s Kriyāsaṃgrahapañjikā, a text within Tantric Buddhism representing a construction manual for monasteries.—Accordingly, [ācāryaparīkṣā in chapter 1]—“[...] In this case, a donor who wants to name a monastery (vihāra-ādika) and other [thing for religious purpose after himself] should, first of all, choose an [appropriate] officiant”.

a residence; often used as the name for a small monastery.

Vihāra (विहार) refers to a name-ending for place-names mentioned in the Gupta inscriptions (reigned from 3rd century CE). Vihāra literally means “a place of recreation or pleasure-ground”. With Buddhists or Jains it means a monastery or temple, originally a hall where the monks met or walked about. Afterwards, these halls were used as assembly halls or places of worship. The modern province of Bihar or Behar is so named on account of the large number of Buddhist monasteries in it.

Vihāra (विहार) is a general denotation for “rock cut architecture”. In the case of Ajantā, vihāra is used to denote everything else, which is bereft of a stūpa shrine. It means residential caves (upāśrayas) that must be without the Buddha shrines as well as those caves that are with the Buddha shrines.

Vihāras or monasteries, not necessarily of the rock-cut types existed right from the times of the Buddha. Buddhist texts refer to the erection of many vihāras. A merchant of Vaiśālī had presented a vihāra to the Buddha in Jetavana for varṣāvāsa, which was adorned beautifully and painted too. Buddhist texts mentions that for this vihāra, the Buddha himself had provided various specifications on the architectural and artistic details.

Vihāra.—(EI 22, 25; CII 3, 4; BL), a Buddhist or Jain monastery or temple or convent (EI 35). (HA), wandering of a Jain monk; also a Jain temple. Note: vihāra is defined in the “Indian epigraphical glossary” as it can be found on ancient inscriptions commonly written in Sanskrit, Prakrit or Dravidian languages.

Source: What is India: Inscriptions of the Vākāṭakas

Vihāra (विहार) refers to a “temples” that were commonly build during the reign of the Vākāṭakas (mid-3rd century CE).—As shown elsewhere, the custom of building temples and vihāras in stone and brick was coming into vogue in the age of the Vākāṭakas, but these materials do not seem to have been generally used for constructing dwelling places for the rich or the poor. Ajaṇṭā painting show that palaces, houses as well as shops in market places were constructed of wood. As is well known, early Indian architecture was in wood. When vihāras and caityas came to be excavated in hills, many of the features of wooden architecture such as beams and rafters, unnecessary as they were in such excavations, were carved in stone. Wooden ribs can still be seen in some early caves such as the Caitya Cave at Kārlā.

vihāra : (m.) an abode; a dwelling place; mode of life; passing the time.

2) Roaming or walking for pleasure, airing, a stroll, taking a walk.

9) Great expansion of the organs of speech.

11) The palace or banner of Indra.

1) A Buddhist or Jaina convent.

(-raḥ) A holy place, a temple, a sanctuary, but especially a Jaina or Baud'dha convent. E. vi, hṛ to convey, aff. ghañ .

6) [v.s. ...] too great expansion of the organs of speech (consisting in too great lengthening or drawling in pronunciation, opp. to saṃ-hāra q.v.), [Ṛgveda-prātiśākhya]

10) [v.s. ...] (with Buddhists or Jainas) a monastery or temple (originally a hall where the monks met or walked about; afterwards these halls were used as temples), [Lalita-vistara; Mṛcchakaṭikā; Kathāsaritsāgara] etc. (cf. [Monier-Williams’ Buddhism 68; 81 etc.])

12) [v.s. ...] Name of the country of Magadha (called Bihār or Behār from the number of Buddhist monasteries See, [Monier-Williams’ Buddhism 68]), [Catalogue(s)]

Vihāra (विहार) in the Sanskrit language is related to the Prakrit word: Vihāra.

1) Vihara (विहर) in the Prakrit language is related to the Sanskrit word: Vihṛ.

2) [noun] a building or residence for Buddhist or Jaina monks.

4) [noun] (jain.) a touring for the purpose of spreading Jaina Dharma.

Chapter 4i - The Twelve Kings

Chapter 5 - The Golden Age and Tradition of Royal Dynasty

Part 4 - From Arama to Vihara < [Chapter III - Nālandā: Evidence for rise and progress of the settlement]

Chapter 20 - The Nibbana Of The Thera

Banner of the Arahants (by Bhikkhu Khantipalo)

Chapter 6 - The Life Of Bhikkhus