Vasundhara means something in Buddhism, Pali, Hinduism, Sanskrit, Jainism, Prakrit, the history of ancient India, Marathi, Jainism, Prakrit, Hindi. If you want to know the exact meaning, history, etymology or English translation of this term then check out the descriptions on this page. Add your comment or reference to a book if you want to contribute to this summary article. 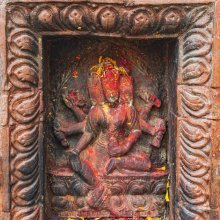 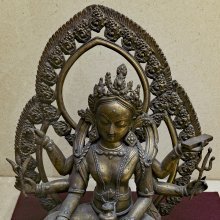 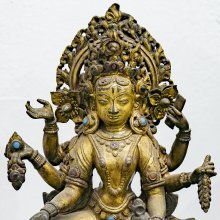 Vasundharā (वसुन्धरा).—A name for mother earth meaning “she who has very fertile soil and unlimited wealth”.

Vasundharā (वसुन्धरा) refers to “earth” and is mentioned in a list of 53 synonyms for dharaṇi (“earth”), according to the second chapter (dharaṇyādi-varga) of the 13th-century Raj Nighantu or Rājanighaṇṭu (an Ayurvedic encyclopedia).  The Dharaṇyādi-varga covers the lands, soil [viz., Vasundharā], mountains, jungles and vegetation’s relations between trees and plants and substances, with their various kinds.

Vasundhara (वसुन्धर) refers to “rich lands”, according to the King Vatsarāja’s Pūjāstuti called the Kāmasiddhistuti (also Vāmakeśvarīstuti), guiding one through the worship of the Goddess Nityā.—Accordingly, “[...] O mother! Even the kings of gods bow to the feet of those men who have acquired a drop of the grace of seeing you. Kings of all the rich lands (vasundhara-indra) extending to the four oceans [bow to them] all the more, illuminating their footrests with the studded jewels of their elevated crowns”.

Vasundhara (वसुन्धर) is the name of a Buddha under whom Śākyamuni (or Gautama, ‘the historical Buddha’) acquired merit along the first through nine bhūmis, according to the Mahāvastu. There are in total ten bhūmis representing the ten stages of the Bodhisattva’s path towards enlightenment. His name can also be spelled as Vasuṃdhara (वसुंधर).

Vasundhara is but one among the 500 Buddhas enumerated in the Mahāvastu during a conversation between Mahākātyāyana and Mahākāśyapa, both principle disciples of Gautama Buddha. The Mahāvastu is an important text of the Lokottaravāda school of buddhism, dating from the 2nd century BCE.

1a) Vasundharā (वसुन्धरा) refers to one of the eight Dikkumārīs living on the southern Rucaka mountains (in the Rucakadvīpa continent), according to chapter 1.2 [ādīśvara-caritra] of Hemacandra’s 11th century Triṣaṣṭiśalākāpuruṣacaritra (“lives of the 63 illustrious persons”): a Sanskrit epic poem narrating the history and legends of sixty-three important persons in Jainism.

Accordingly, “[...] Eight Dikkumārīs [viz., Vasundharā], living on the southern Rucaka Mountains, came there, impelled by joy like a whip. Having bowed to the Ford of Jinas and his mother and having introduced themselves as before, they stood on the right, singing, with pitchers in their hands. [...].”.

1c) Vasundharā (वसुन्धरा) refers to one of the two wifes of king Stimitasāgara from Śubhā, according to chapter 5.2 [śāntinātha-caritra].—Accordingly:—“Now, in this Jambūdvīpa in the province Ramaṇīya, the ornament of East Videha, on the south bank of the Śītā, there is a city, named Śubhā, [...]. Its king was Stimitasāgara, who surpassed Meru in firmness, the ocean in depth. He had two wives, Vasundharā and Anuddharā, who wore the yoke of good conduct, by whom the wealth of beauty of an Apsaras was surpassed. The soul of Amitatejas fell from Nanditāvarta and descended into the womb of Queen Śrīmat Vasundharā. [...]”.

2a) Vasundhara (वसुन्धर) is the name of an ancient king from Susīmā, according to chapter 6.5 [datta-nandana-prahlāda-caritra].—Accordingly:—“There is a city Susīmā, the ornament of East Videha of this Jambūdvīpa and there was a king there, Vasundhara. After he had guarded the earth for a long time, he took the vow under Muni Sudharma, and went to Brahmaloka after death”.

Vasundhara is one of the Brāhmaṇa donees mentioned in the “Asankhali plates of Narasiṃha II” (1302 A.D.). When a grant was made to a large number of Brāhmaṇas, the chief amongst the donees seems to have been called Pānīyagrāhin especially. In the present record, though all the donees (e.g., Vasundhara) are referred to as Pāṇigrāhi-mahājana, their list is headed by a Brāhmaṇa with Pāṇigrahī as his surname.

These copper plates (mentioning Vasundhara) were discovered from the house of a Santal inhabitant of Pargana Asankhali in the Mayurbhanj State (Orissa). It was made when king Vīra-Narasiṃhadeva was staying at the Bhairavapura-kaṭaka (city, camp or residence).

Vasundharā.—(IE 7-1-2), ‘one’. Note: vasundharā is defined in the “Indian epigraphical glossary” as it can be found on ancient inscriptions commonly written in Sanskrit, Prakrit or Dravidian languages.

1) Vasuṃdhara (वसुंधर) in the Prakrit language is related to the Sanskrit word: Vasundhara.

Part 5 - Family Śakrendra and others < [Chapter 5]