Vasuki means something in Buddhism, Pali, Hinduism, Sanskrit. If you want to know the exact meaning, history, etymology or English translation of this term then check out the descriptions on this page. Add your comment or reference to a book if you want to contribute to this summary article. 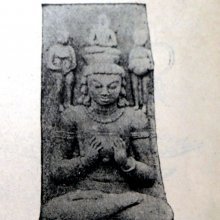 1a) Vāsuki (वासुकि).—A son of Kadru: a chieftain of the Nāgaloka. He was used as the rope in the amṛtamathana. Identified with Hari.1 A friend of Indra: the milkman of the Nāgas for milking the earth: moving with the sun for two months;2 in the Vaiḍūrya śālā of Lalitā;3 his aid to Tripurāri;4 an ear ornament of Śiva; shaken by Hiraṇyakaśipu: sports in Amarakaṇṭaka;5 heard the viṣṇu purāṇa from Dhṛtarāṣṭra the Nāga and narrated it to Vatsa.6

1b) The Nāga presiding over the month of Madhu.*

1c) A son of Surasā and Kaśyapa and a King of the Nāgas; the hundred headed snake in Sutalam;1 with the sun in the spring.2

1d) A Nāga living in the Niṣadha hill.*

Vāsuki (वासुकि) is a name mentioned in the Mahābhārata (cf. I.33.1, I.31.5, I.35) and represents one of the many proper names used for people and places. Note: The Mahābhārata (mentioning Vāsuki) is a Sanskrit epic poem consisting of 100,000 ślokas (metrical verses) and is over 2000 years old.

Vāsukī also refers to the name of a Tīrtha (pilgrim’s destination) mentioned in the Mahābhārata (cf. III.83.30).

Vāsuki (वासुकि) is the Sanskrit name for a deity to be worshipped during raṅgapūjā, according to the Nāṭyaśāstra 3.1-8. Accordingly, the master of the dramatic art who has been initiated for the purpose shall consecrate the playhouse after he has made obeisance (e.g., to Vāsuki).

1) Vāsuki (वासुकि) is the name of a king of the Nāgas, according to the Kathāsaritsāgara chapter 6. The son of his brother, Kīrtisena, married Śrutārthā through the gāndharva marriage after seeing her bathe.

Vāsuki (वासुकि) is also mentioned as the king of the Nāgas (nāgarāj) according to the sixteenth story of the Vetālapañcaviṃśati in the Kathāsaritsāgara, chapter 90. Accordingly, as Mitrāvasu said to Jīmūtavāhana: “... when Vāsuki, the king of the snakes, saw that, he feared that his race would be annihilated at one fell swoop, so he supplicated Garuḍa, and made a compact with him, saying: ‘King of birds, I will send you one snake every day to this southern sea for your meal. But you must by no means enter Pātāla, for what advantage will you gain by destroying the snakes at one blow?’”.

2) Vāsuki (वासुकि) is the name of the eldest brother of Udayana, according to the Kathāsaritsāgara, chapter 11. Udayana is the King of Vatsa born to king Sahasrānīka and his wife Mṛgāvatī. Vāsuki is mentioed as having given, once upon a time, a melodious lute.

The Kathāsaritsāgara (‘ocean of streams of story’), mentioning Vāsuki, is a famous Sanskrit epic story revolving around prince Naravāhanadatta and his quest to become the emperor of the vidyādharas (celestial beings). The work is said to have been an adaptation of Guṇāḍhya’s Bṛhatkathā consisting of 100,000 verses, which in turn is part of a larger work containing 700,000 verses.

Vāsuki (वासुकि).—One of the eight kulas (‘families’) of nāgas mentioned by Soḍḍhala in his Udayasundarīkathā. Vāsuki, and other nāgas, reside in pātāla (the nether world) and can assume different forms at will. Their movement is unobstructed in the all the worlds and they appear beautiful, divine and strong.

Vāsuki (वासुकि) is the name of a nāga chief, presiding over Paratāla, according to the Parākhyatantra 5.44-45. Paratāla (also called Varatāla) refers to one of the seven pātālas (‘subterranean paradise’). The word pātāla in this tantra refers to subterranean paradises for seekers of otherworldly pleasures and each the seven pātālas is occupied by a regent of the daityas, nāgas and rākṣasas.

Vāsuki (वासुकि) refers to one of the eight primordial snakes, according to the 20th century Prayogasamuccaya (one of the most popular and widely practised book in toxicology in Malayalam).—The work classifies viṣa into two groups, viz. sthāvara and jaṅgama (animate and inanimate). This is followed by a brief description of the origin of snakes. A mythological story is narrated in this context. It is said that in the beginning, there were only 8 snakes, Ananta, Gulika, Vāsuki, Śaṅkhapālaka, Takṣaka, Mahāpadma, Padma and Karkoṭaka and that all other snakes originated from these.

Vasuki is a giant snake, the king of all serpents. Some stories put the name of the king of serpents as Takshaka, who was the snake who was responsible for Parikshit's death.

The most famous story in which Vasuki appears is the incident of churning the ocean of milk to obtain Amrit. Vasuki was used as the rope with which mount meru was bound to churn the ocean. The strain caused him to exhale Alahala, the most potent venom in the universe. There was the danger that this poison could destroy all living beings, which was averted by Shiva who swallowed the poison, turning his throat blue and earning him the sobriquet - Nilakanta (blue-throated).

Vasuki : King of the Nagas or serpents who live in Patala. He was used by the gods and Asuras for a coil round the mountain Mandara at the churning of the ocean.

Vāsuki (वासुकि) is the name of a Nāga mentioned as attending the teachings in the 6th century Mañjuśrīmūlakalpa: one of the largest Kriyā Tantras devoted to Mañjuśrī (the Bodhisattva of wisdom) representing an encyclopedia of knowledge primarily concerned with ritualistic elements in Buddhism. The teachings in this text originate from Mañjuśrī and were taught to and by Buddha Śākyamuni in the presence of a large audience (including Vāsuki).

Vāsuki (वासुकि).—Serpent deity (nāga) of the eastern cremation ground.—In the Śmaśānavidhi 5, Vāsuki is white, with a blue lotus on his hood. He makes the añjali, bowing before the lord before him.

Vāsuki (वासुकि) is the name of a serpent (nāga) associated with Caṇḍogra: the eastern cremation ground (śmaśāna) according to the Vajravārāhī-sādhana by Umāpatideva as found in te 12th century Guhyasamayasādhanamālā. As a part of this sādhana, the practicioner is to visualize a suitable dwelling place for the goddess inside the circle of protection which takes the form of eight cremation grounds.

These nāga-kings (e.g., Vāsuki) are variously known as nāgarāja, nāgeśa, nāgendra and bhujageśa and are depicted as wearing white ornaments according to Lūyīpāda’s Śmaśānavidhi. They have human tosos above their coiled snaketails and raised hoods above their heads. They each have their own color assigned and they bear a mark upon their raised hoods. They all make obeisance to the dikpati (protector) who is before them and are seated beneath the tree (vṛkṣa).

(-kiḥ) The serpent Vasuki, sovereign of the snakes and worn by Siva on his person. E. vasu a jewel, ka the head, or vasuka here said to be a name of Kasyapa, aff. of descent iñ .

3) of a serpent-king (one of the three chief kings of the Nāgas, the other two being Śeṣa and Takṣaka; the gods and demons used the serpent Vāsuki as a rope for twisting round the mountain Mandara when they churned the ocean, [Religious Thought and Life in India 108, 233]), [Mahābhārata; Rāmāyaṇa] etc.

4) of an author, [Pratāparudrīya [Scholiast or Commentator]]

5) of another man, [Pravara texts]

Search found 49 books and stories containing Vasuki, Vāsuki, Vāsukī; (plurals include: Vasukis, Vāsukis, Vāsukīs). You can also click to the full overview containing English textual excerpts. Below are direct links for the most relevant articles: