Mahavidya means something in Buddhism, Pali, Hinduism, Sanskrit. If you want to know the exact meaning, history, etymology or English translation of this term then check out the descriptions on this page. Add your comment or reference to a book if you want to contribute to this summary article. 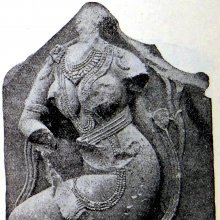 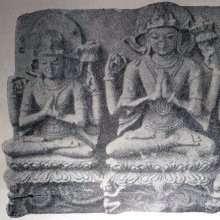 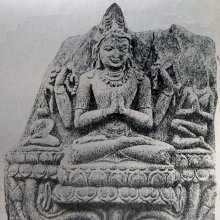 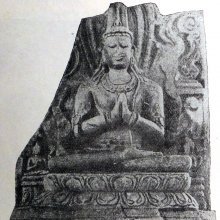 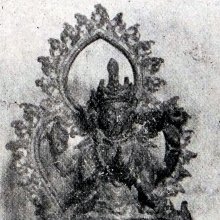 1) Mahāvidyā (महाविद्या, “Great Knowledge”):—One of the names of Mahālakṣmī (rajas-form of Mahādevī). Mahālakṣmī is one of the three primary forms of Devī. Not to be confused with Lakṣmī, she is a more powerful cosmic aspect (vyaṣṭi) of Devi and represents the guṇa (universal energy) named sattva. Also see the Devī Māhātmya, a Sanskrit work from the 5th century, incorporated into the Mārkaṇḍeya-Purāṇa.

2) Mahāvidyā (महाविद्या, “transcendent knowledge”):—One of the names of Sarasvatī, the Hindu goddess of speech, eloquence and all forms of knowledge.

Mahāvidyā (महाविद्या) (or Uttamā) and Vidyeśvara refers to the pair of Goddess and God appearing in the sixteenth Kalpa (aeon), according to the Kularatnoddyota.—Chapter nine of the Kularatnoddyota opens with the goddess asking how the Kula tradition (kulāmnāya) will be worshipped along with its mantras and Vidyās and who will bring it down (avatāraka) into the world in the various cosmic aeons (kalpa). After explaining that it is brought down into the world by incarnations or aspects of both the god and the goddess (aṃśamātra), the god goes on to list the names of these aspects—a goddess and her consort [i.e., Mahāvidyā—Vidyeśvara]—in nineteen aeons (kalpa), many of which we recognize from the earlier version in the Tantrasadbhāva.—(cf. Jayadrathayāmala-tantra of the Kāpālikas).

Mahāvidyā (महाविद्या) or Mahāvidyāgama refers to one of upāgamas (supplementary scriptures) of the Bimbāgama which is one of the twenty-eight Siddhāntāgama: a classification of the Śaiva division of Śaivāgamas. The Śaivāgamas represent the wisdom that has come down from lord Śiva, received by Pārvatī and accepted by Viṣṇu. The purpose of revealing upāgamas (e.g., Mahāvidyā Āgama) is to explain more elaborately than that of mūlāgamas (e.g., Bimba-āgama) and to include any new idea if not dealt in mūlāgamas.

Mahavidyas (Great Wisdoms) or Dasha-Mahavidyas are a group of ten aspects of the Divine Mother Durga or Kali herself or Devi in Hinduism. The 10 Mahavidyas are Wisdom Goddesses, who represent a spectrum of feminine divinity, from horrific goddesses at one end, to the gentle at the other.

The name Mahavidyas comes from the Sanskrit roots, with maha meaning 'great' and vidya meaning, 'revelation, manifestation, knowledge, or wisdom.

Shaktas believe, "the one Truth is sensed in ten different facets; the Divine Mother is adored and approached as ten cosmic personalities," the Dasa-Mahavidya ("ten-Mahavidyas"). The Mahavidyas are considered Tantric in nature, and are usually identified as:

Source: University of Divinity: The Tantric Hymn to Kālī

– of which the first listed is always is Kālī: the other nine are but her forms.

The Mahāvidyās are popularly ten in number:

In the context of Srividya, sixteen Mahāvidyās are listed (the first ten are identical):

In the Tāntrika literature, the Mahāvidyās are usually enumerated as ten. But the number is sometimes increased by three and sometimes by six. The Muṇḍamālā-tantra names the ten Mahāvidyās thus:

The list of the Muṇḍamālā-tantra being taken as standard, the three and six additional names which occur in Sammohana Tantra are:

There appear to be slight differences of opinion in the various Tantras in regard to the names of the Bhairavas of these Mahāvidyās. These names, as given in the Toḍala-tantra, are:

Mahāvidyā (महाविद्या) refers to a group of deities summoned by the Yamāntaka-mantra and mentioned as attending the teachings in the 6th century Mañjuśrīmūlakalpa: one of the largest Kriyā Tantras devoted to Mañjuśrī (the Bodhisattva of wisdom) representing an encyclopedia of knowledge primarily concerned with ritualistic elements in Buddhism. The teachings in this text originate from Mañjuśrī and were taught to and by Buddha Śākyamuni in the presence of a large audience (including Mahāvidyā).

Mahāvidyā (महाविद्या) refers to a “great spell”, according to the Vajratuṇḍasamayakalparāja, an ancient Buddhist ritual manual on agriculture from the 5th-century (or earlier), containing various instructions for the Sangha to provide agriculture-related services to laypeople including rain-making, weather control and crop protection.—Accordingly,“Then the Bhagavān praised the great Garuḍa Lord, Brahmā, Viṣṇu and Maheśvara, ‘Well done, well done, O Great Brahmā, well spoken is this speech. A great spell (mahāvidyā) is uttered. [...]’”.

Mahāvidyā is a Sanskrit compound consisting of the terms mahā and vidyā (विद्या).

Verse 2.1.249 < [Chapter 1 - The Beginning of the Lord’s Manifestation and His Instructions on Kṛṣṇa-saṅkīrtana]

Verse 1.14.93 < [Chapter 14 - The Lord’s Travel to East Bengal and the Disappearance of Lakṣmīpriyā]