This page contains an iconography image of Emanations of Ratnasambhava: Vajrayogini and represents figure 191 of the book Indian Buddhist Iconography, based on extracts of the Sadhanamala English translation. These plates and illustrations represent either photographs of sculptures or line-drawing reproductions of paintings or other representations of Buddhist artwork. 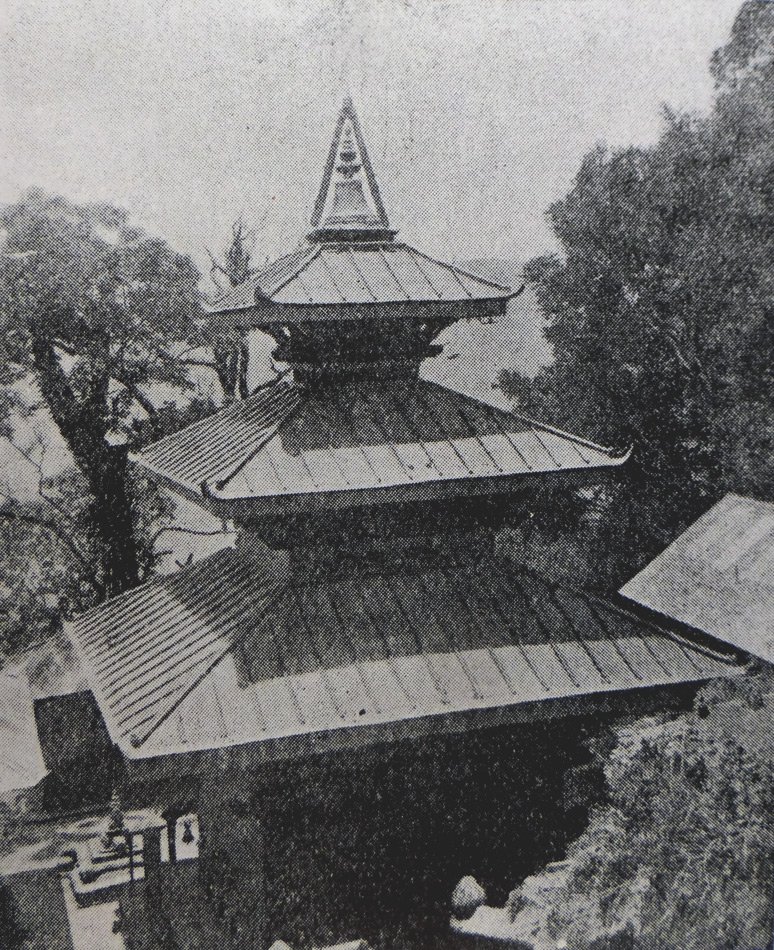 (I) Headless Form (of Vajrayoginī):

Vajrayoginī is another of the important and popular goddesses who does not seem to bear the image of any of the Dhyāni Buddhas on the crown. Four Sādhanas describe her forms, which are three in number and conform to two distinct types, very different form each other. In one case, she has no head on her shoulder, but carries it in her hand, and in another, she has her head intact. The former form is identical in appearance with the Hindu goddess Cchinnamastā belonging to the group of ten Mahāvidyās. It is therefore possible to conclude that this Buddhist goddess was borrowed and incorporated wholly into their pantheon by the Hindus. She is always accompanied by the two Yogims on either side of her, who are called Vajravairocanī and Vajravarṇanī.

The Sādhana describing her headless form is as follows:

“The worshipper should conceive himself as Bhaṭṭārikā Vajrayoginī ...of yellow colour, who carries in her left hand her own head severed by herself with her own Kartri held in her right hand. Her left hand is raised upwards while the right is placed below. She is nude, and her right leg is stretched while the left is bent down. He (the worshipper) should also meditate on the streams of blood issuing from the severed body as falling into the mouth of the severed head and into the mouths of the two Yoginīs on either side of her.

The Red form is no less terrible than the one described above. She is surrounded on all sides by the terrible burning grounds. She stands in the Ālīḍha attitude, on the orb of the sun, is in the prime of youth, and has red complexion. She rides the corpse, is nude, has three eyes, red and round, contorted brows, protruding belly and tongue, and is endowed with the six auspicious symbols. She carries the Kapāla in the left hand and the Vajra in the right, while the Khaṭvāṅga hangs from her left shoulder. This form of Vajrayoginī is similar in many respects to the forms of both Nairātmā and Vajravārāhī, so much so, indeed, that a confusion is likely to arise in the identification of their images. If an image shows the dancing attitude in Ardhaparyaṅka, it may be identified as Nairātmā or Vajravārāhī, but if it shows the Ālīḍha attitude, it may have to be identified as Vajrayoginī. The excrescence near the right ear arid the corpse lying on its chest is peculiar only to Vajravārāhī; while the absence of the excrescence and the corpse lying on its back point to Nairātmā. The Ālīḍha attitude is peculiar only to Vajrayoginī.

She may also have a Yellow form, when according to the Sādhana, she will carry the Kartri ard the Kapāla, but in other respects will be identical with the one just described Another Sādhana adds the information that the Kapāla should be filled with the blood of the Devas (gods) and the Asuras (demons) and that the hand carrying the Kartri may show the Tarjanī also.

Vajrayoginī is one of the consorts of Heruka, who remains with her in yab-yum, and their union is the subject of the celebrated Heruka-Tantra. The temple of Vajrayoginī at Sāṅku (Fig. 191) in Nepal does not contain an image of any of these varieties of Vajrayoginī. It contains the image of Ugratārā, more popularly known as Mahācīna-Tārā, which is believed to have been carried over there by Bengali priests from a place of the same name in the District of Dacca, about A.D. 1350, when the Muhammadans led their victorious armies over Eastern Bengal.

Images of Vajrayoginī are found in Tibet.