Bagalamukhi means something in Hinduism, Sanskrit. If you want to know the exact meaning, history, etymology or English translation of this term then check out the descriptions on this page. Add your comment or reference to a book if you want to contribute to this summary article. 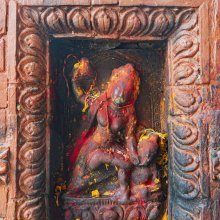 Bagalāmukhī (बगलामुखी, “the crane-headed”):—The eighth of the ten Mahāvidyās. She represents the power of cruelty. She is the aspect of our human psychology that wants to kill and torture other human beings. She is the force behind our suppressed desire to extinguish everyone but ourselves. She is the presiding deity over the yogic powers (siddhi), wether they be used for good or selfish purposes. She is also associated with sexual desire and pleasure. For example, she has the epithet Kāmadeva (“god of sexual desire”).

The ten Mahāvidyās are the emanations of Mahākālī, the Goddess of time and death. She is depicted as a fearful laughing goddess with four arms entwined with poisonous snakes in her hair. She has three red eyes, a wagging tongue and feaful teeth. Her left foot is standing on a corpse

[«previous (B) next»] — Bagalamukhi in Hinduism glossary
Source: WikiPedia: Hinduism

Bagalamukhi or Bagala (Devanagari: बगलामुखी) is one of the ten mahavidyas (great wisdom goddesses) in Hinduism. Bagalamukhi Devi smashes the devotee's misconceptions and delusions (or the devotee's enemies) with her cudgel. She is also known as Pitambara Maa in North India.

Search found 2 books and stories containing Bagalamukhi, Bagalāmukhī; (plurals include: Bagalamukhis, Bagalāmukhīs). You can also click to the full overview containing English textual excerpts. Below are direct links for the most relevant articles: