Tripurasundari means something in Hinduism, Sanskrit. If you want to know the exact meaning, history, etymology or English translation of this term then check out the descriptions on this page. Add your comment or reference to a book if you want to contribute to this summary article. 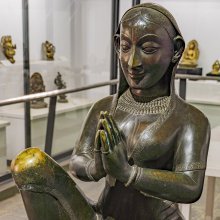 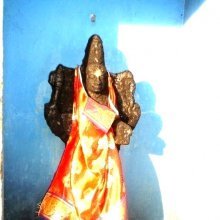 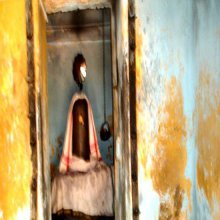 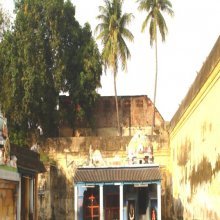 Tripurasundarī (त्रिपुरसुन्दरी, “Goddess of the three realms”):—The third of the ten Mahāvidyās. She is identified with Ṣoḍaśī, who represents the power of Śiva as the ruler of the three worlds. Ṣoḍaśī symbolizes the light radiating from the three eyes of Śiva to illumine the worlds. The ten Mahāvidyās are the emanations of Mahākālī, the Goddess of time and death. She is depicted as a fearful laughing goddess with four arms entwined with poisonous snakes in her hair. She has three red eyes, a wagging tongue and feaful teeth. Her left foot is standing on a corpse

Tripurasundarī (त्रिपुरसुन्दरी) (or Mahātripurasundarī) is the Goddess who questions the God Bhairava, according to the Yoginīhṛdaya (one of the principal works of Tantric Hinduism).—Tripurasundarī, a beautiful, auspicious (and erotic) form of the great Hindu Goddess, is the main deity of an important Tantric Śaiva tradition, often called śrīvidyā because such is the name of her main or root mantra (mūlamantra). The name Tripurasundarī is often explained as referring to that goddess’s character as “Mother” of various triads—all the more so when the exegetes of the system interpret it in the spirit of the Kashmirian Śaiva nondualist system of the Trika, the “Triad”. She is also Kāmeśvarī, associated with Kāmeśvara as the Mistress and the Master of Love. Tripurasundarī is sometimes called Lalitā. She is also considered as one of the ten Mahāvidyās, or Nityās, in which case she is sometimes named Śoḍaśī (“Sixteenth”) or even Śrīvidyā. There exist, too, such aspects of her as Tripurabhairavī or Balatripurasundarī.

Tripurasundarī (त्रिपुरसुन्दरी) is the name of a Goddess.—In the auspicious form that she has in the Yoginīhṛdaya, she is usually shown as a beautiful shining woman, three-eyed, with the waxing moon on her forehead, wearing a red garment, seated on a lotus, holding in her four hands a goad and arrow, bow and noose. [...] There are very few stone images of Tripurasundarī, but there are many paintings. Her worship is done using the śrīcakra, and no concrete image is used, but during the ritual, she is to be visualized by the officiating adept as described in the texts.

Tripurasundarī is one of the group of ten goddesses of Hindu belief, collectively called Mahavidyas or Dasha-Mahavidyas. She is the highest aspect of Goddess Adi Shakti Parvati / Durga. Tripurasundari is the primary goddess associated with the Shakta Tantric tradition known as Sri Vidya.The Goddess Who is “Beautiful in the Three Worlds” (Supreme Deity of Srikula systems); the “Moksha Mukuta”.

As Shodashi, Tripurasundari is represented as a sixteen-year-old girl, and is believed to embody sixteen types of desire. Shodashi also refers to the sixteen syllable mantra, which consists of the fifteen syllable (panchadasakshari) mantra plus a final seed syllable. The Shodashi Tantra refers to Shodashi as the "Beauty of the Three Cities," or Tripurasundari.

Chapter 43 - Types of Initiation and True Service of the Preceptor