Kukkuta means something in Buddhism, Pali, Hinduism, Sanskrit, Marathi, Hindi, biology. If you want to know the exact meaning, history, etymology or English translation of this term then check out the descriptions on this page. Add your comment or reference to a book if you want to contribute to this summary article. 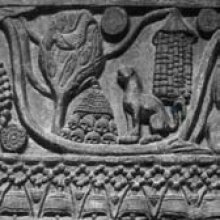 Kukkuṭa (कुक्कुट) is a Sanskrit word referring to the “hen/cock/rooster”. The meat of this animal is part of the māṃsavarga (‘group of flesh’), which is used throughout Ayurvedic literature. It is also known by the names Caraṇāyudha and Dakṣa. The animal Kukkuṭa is part of the group of birds named Vartakādi, which is a sub-group of Viṣkira, refering to “birds similar to common quail who eat while scattering the gains”. It was classified by Caraka in his Carakasaṃhitā sūtrasthāna (chapter 27), a classical Ayurvedic work. Caraka defined such groups (vargas) based on the dietic properties of the substance.

The meat of Cocks (caraṇāyudha) is unctuous, hot, aphrodisiac, bulk-promoting, voice-awakening and tonic. It excells at alleviating vāta. It is diaphorectic. The eggs of the Hen (dakṣa) are useful in diminished semen, cough, heart disease and injuries. They are sweet, bot cauising burning sensation and immediately strength-promoting.

Kukkuta [ಕುಕ್ಕುಟ] in the Kannada language is the name of a plant identified with Mallotus tetracoccus (Roxb.) Kurz from the Euphorbiaceae (Castor) family having the following synonyms: Mallotus ferrugineus, Mallotus albus var. occidentalis. For the possible medicinal usage of kukkuta, you can check this page for potential sources and references, although be aware that any some or none of the side-effects may not be mentioned here, wether they be harmful or beneficial to health.

Kukkuṭa (कुक्कुट)—Sanskrit word for a bird corresponding to “cock” (Galloperdix sp.). This animal is from the group called Viṣkira (which scatter). Viṣkira itself is a sub-group of the group of animals known as Jāṅghala (living in high ground and in a jungle).

Kukkuṭa (कुक्कुट) refers to the “hen”, according to the 17th century Bhojanakutūhala (dravyaguṇāguṇa-kathana), and is commonly found in literature dealing with the topics of dietetics and culinary art, also known as Pākaśāstra or Pākakalā.—The dravyaguṇāguṇa section contains the discussions on different food articles and their dietetic effects according to the prominent Ayurvedic treatises. The meat like Kukkuṭa (hen) is mutually incompatible (viruddhāhāra) with Dadhi (curds).

Kukkuṭa (कुक्कुट) is another name for Śitāvarī, an unidentified medicinal plant, according to verse 4.50-52 of the 13th-century Raj Nighantu or Rājanighaṇṭu. The fourth chapter (śatāhvādi-varga) of this book enumerates eighty varieties of small plants (pṛthu-kṣupa). Note: Dr. J.K. Ojhā identifies Śitāvarī as Celosia argentea Linn (“plumed cockscomb”; of the Amaranthaceae family) while the commentator of the Rājanighaṇṭu identifies it with Blepharis edulis Pers (“uttanjan”; from the Acanthaceae family); both are quite apart from each other. Together with the names Kukkuṭa and Śitāvarī, there are a total of fifteen Sanskrit synonyms identified for this plant.

Kukkuṭa (कुक्कुट) (lit. “one who outcalls like kukuta”) refers to the Gray jungle fowl (Gallus Sonnerari), according to scientific texts such as the Mṛgapakṣiśāstra (Mriga-pakshi-shastra) or “the ancient Indian science of animals and birds” by Hamsadeva, containing the varieties and descriptions of the animals and birds seen in the Sanskrit Epics such as the Ramayana and Mahabharata.

Kukkuṭā (कुक्कुटा):—One of the sixty-eight Rasauṣadhi, very powerful drugs known to be useful in alchemical processes related to mercury (rasa), according to Rasaprakāśa-sudhākara (chapter 9).

Kukkuṭa (कुक्कुट) is the name of a gaṇa (attendant of Śiva), mentioned in the Skandapurāṇa 4.2.53. In this chapter, Śiva (Giriśa) summons his attendants (gaṇas) and ask them to venture towards the city Vārāṇasī (Kāśī) in order to find out what the yoginīs, the sun-god, Vidhi (Brahmā) were doing there.

While the gaṇas such as Kukkuṭa were staying at Kāśī, they were desirous but unable of finding a weakness in king Divodaśa who was ruling there. Kāśī is described as a fascinating place beyond the range of Giriśa’s vision, and as a place where yoginīs become ayoginīs, after having come in contact with it. Kāśī is described as having both the power to destroy great delusion, as well as creating it.

Kukkuṭa (कुक्कुट).—The banner of Skanda, presented to him by Vāyu: the standard of Kumāra;1 śrāddha piṇḍa;2 killer of, goes to hell.3 Cock crying in pradoṣa time is bad to the place.4

Kukkuṭa (कुक्कुट) is a name mentioned in the Mahābhārata (cf. IX.44.74) and represents one of the many proper names used for people and places. Note: The Mahābhārata (mentioning Kukkuṭa) is a Sanskrit epic poem consisting of 100,000 ślokas (metrical verses) and is over 2000 years old.

Kukkuṭa (कुक्कुट, “cock”) refers to one of the several “attributes” (āyudha) or “accessories” of a detiy commonly seen depicted in Hindu iconography, defined according to texts dealing with śilpa (arts and crafs), known as śilpaśāstras.—The śilpa texts have classified the various accessories under the broad heading of āyudha or karuvi (implement), including even flowers, animals, and musical instruments. The representations of certain animals and birds are generally found in the hands of images. They are, for example, Kukkuṭa.

Kukkuṭa (कुक्कुट) refers to “cockerels”, according to Bāṇa’s Kādambarī (p. 225).—Accordingly, “[Then through the main entrance (of Caṇḍikā), the temple yard:] Her courtyard was adorned (vibhūṣita-aṅgaṇa) with thickets of red aśoka trees, the spaces between the branches of which were made gapless by flocks of perching red cockerels (rakta-kukkuṭa-kūla), [trees] which appeared to reveal unseasonal clusters of blooms in their fear”

1. Kukkuta - One of three bankers of Kosambi, the others being Ghosaka and Pavariya. Having heard from some ascetics, whom they had entertained, of the appearance of the Buddha, they went with these ascetics to Savatthi, each carrying offerings in five hundred carts. Having heard the Buddha preach, they became sotapannas. They gave alms to the Buddha for a fortnight, and then, with his permission, returned to Kosambi. They built monasteries in their gardens for the use of the Buddha and his monks, that built by Kukkuta being called the Kukkutarama. The Buddha stayed one day at a time in each monastery, and on that day accepted the hospitality of its founder. DA.i.318f; DhA.i.203ff; AA.i.234f; PsA.414.

It is said (MA.i.540f) that the bankers built a monastery for each league on the road between Savatthi and Kosambi for the use of the Buddha during his journeys.

2. Kukkuta - A frontier town near Himava; the capital of a kingdom three hundred leagues in extent, where Maha Kappina once ruled. There were three rivers to cross on the way from Kukkuta to Savatthi (ThagA.i.507f; Ap.ii.469). See also Kukkutavati.

Kukkuta (कुक्कुत, “cock”) represents an incarnation destination of the tiryaggati (animal realm) according to the “world of transmigration” section in the 2nd century Mahāprajñāpāramitāśāstra (chapter XXVII).—The Bodhisattva sees the animals (tiryak) undergoing all the torments: they are made to gallop by blows of the whip or stick; they are made to make long journeys carrying burdens; their harness is damaged; they are branded with hot iron. If sensual desires (kāmarāga), passion and ignorance (avidyā) were predominant in them [people], they are reborn as [for example] cock (kukkuta); thus they become one of the hundred thousand kinds of birds. If they are guilty of lust, their body becomes covered with hairs and feathers; their plumage is fine and smooth; their beak, big and wide; thus they cannot distinguish touch (sparśa) and taste (rasa).

Also, if they have deceived honest people (sajjanāvamāna), they take the body of [for example], a rooster (kukkuṭa).

Kukkuta in India is the name of a plant defined with Blepharis ciliaris in various botanical sources. This page contains potential references in Ayurveda, modern medicine, and other folk traditions or local practices It has the synonym Acanthus edulis Forssk. (among others).

If you are looking for specific details regarding Kukkuta, for example side effects, pregnancy safety, chemical composition, diet and recipes, health benefits, extract dosage, have a look at these references.

2) A wisp of lighted straw, a firebrand.

2) [noun] the female of the domesticated chicken; a hen.

3) [noun] any of duck like, freshwater birds of the genus Fulica and of the rail family, with long-lobed toes.

6) [noun] the act or an instance of cheating.

Search found 32 books and stories containing Kukkuta, Kukkuṭā, Kukkuṭa; (plurals include: Kukkutas, Kukkuṭās, Kukkuṭas). You can also click to the full overview containing English textual excerpts. Below are direct links for the most relevant articles:

The beings of the threefold world (traidhātuka) < [The world of transmigration]

Chapter 63 - On the features of the Cock (Kukkuṭa-lakṣaṇa)

Chapter 5.3 - The story of Kadru (daughter of Daksha Prajapati)