Umamaheshvara means something in Hinduism, Sanskrit. If you want to know the exact meaning, history, etymology or English translation of this term then check out the descriptions on this page. Add your comment or reference to a book if you want to contribute to this summary article.

The Sanskrit term Umāmaheśvara can be transliterated into English as Umamahesvara or Umamaheshvara, using the IAST transliteration scheme (?). 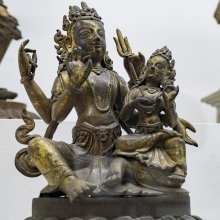 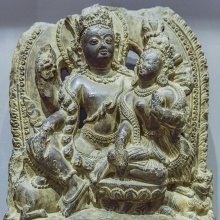 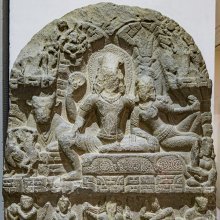 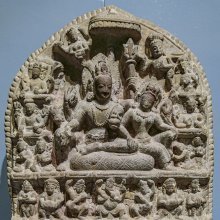 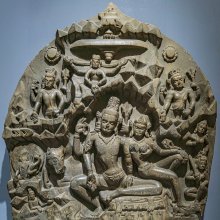 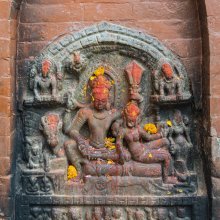 Umāmaheśvara (उमामहेश्वर).—To be worshipped in ādityaśayana Image of; worship of; either four or two hands; three eyes; clad in elephant's skin; surrounded by Jaya and Vijaya, and also Kārtikeya and Vināyaka.*

Umāmaheśvara (उमामहेश्वर) or Umāmaheśvaravrata refers to type of Vrata (“religious observances”), according to the 10th century Saurapurāṇa: one of the various Upapurāṇas depicting Śaivism.—Accordingly, the Umāmaheśvara-vrata is described in the Saurapurāṇa 43.1-17. The Sūta gives the tradition of receiving knowledge about this vrata. In the past it was told by Śaṅkara to Pārvatī and Skanda. Skanda imparted it to Agastya and the latter instructed it to Vyāsa and from Vyāsa the Sūta received this knowledge. About the efficacy of this vrata it is said that it destroys all sins and bestows dharma, artha, kāma and mokṣa.

This Umāmaheśvara-vrata is observed on the full-moon day, new-moon day, the fourteeth and the eighth tithis, at night. The observer should maintain celebacy, eat haviṣya, be truthful and control the sense-organs. At the end of a year image of Umāmaheśvara is to be made either of gold or silver. Bathing the idol with pañcāmṛta and having decorated it with cloth, flower, the observer should worship the idol with various eatables according to injunction. The idol should be furnished with banner, canopy and cāmara. The preceptor should be worshipped with cloth, ornaments etc. with devotion. Dakṣiṇā should be given and devotees of Śiva are to be fed.

The observer of this Umāmaheśvara-vrata should place the idol, which is worshipped, in pure copper-plate and having covered with white cloth should pay obeisance. Constructing the Śiva temple the observer should install the image on the vedī with the sound of conch, bugles etc. and proclaim (nivedayet) this vrata to Śaṃbhu. Having circumambulated Śiva he should pray for pardon. The person performing this vrata gets all his desires fulfilled.