Vanavasa means something in Buddhism, Pali, Hinduism, Sanskrit, Jainism, Prakrit, Marathi. If you want to know the exact meaning, history, etymology or English translation of this term then check out the descriptions on this page. Add your comment or reference to a book if you want to contribute to this summary article. 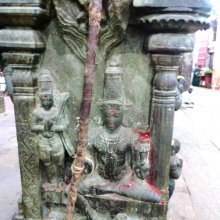 Vanavāsa (वनवास) refers to the “life in the forest”, according to the Śivapurāṇa 2.3.27 (“Description of the fraudulent words of the Brahmacārin”).—Accordingly, as Śiva (in guise of a Brahmacārin) said to Pārvatī: “[...] Handing over a gold coin you wish to buy a piece of glass. Setting aside the pure sandal paste you wish to smear mud over your body. Unmindful of the sunlight you wish to have the light of the glow worm. Throwing away the fine China silk you wish to wear the hide. Discarding the life at home (gṛhavāsa) you yearn for a life in the forest (vanavāsa), O madam, throwing away excellent treasure you wish a piece of iron in return? [...]”.

Vanavāsa (वनवास) refers to one who “stays in a forest”, according to the Rāmāyaṇa chapter 2.29. Accordingly:—“[...] Sītā was distressed to hear these words of Rāma and spoke these words slowly, with her face with tears: ‘[...] Oh Rāma the man of great strength! Ever since I heard this word from Brāhmaṇas who can interpret marks on the body, I was always eager to stay in a forest (vanavāsa). Oh, Rāma the beloved! That prediction of dwelling in the forest (vanavāsa) is to be realised by me. I must accordingly accompany you to the forest, it cannot be otherwise’”.

A district, probably Northern Kanara, in South India. After the Third Council, Rakkhita Thera was sent there to convert the people, and he preached the Anamatagga Samyutta poised in mid air. It is said that sixty thousand persons embraced the faith, thirty seven thousand joined the Order, while fifty viharas were established in the country.

Vānavāsa (वानवास) is the name of an ancient kingdom, according to chapter 4.2 [vāsupūjya-caritra] of Hemacandra’s 11th century Triṣaṣṭiśalākāpuruṣacaritra (“lives of the 63 illustrious persons”): a Sanskrit epic poem narrating the history and legends of sixty-three important persons in Jainism.

Accordingly, as Vasupūjya and Jayā spoke to Vāsupūjya:—“All the existing kings, among men and the Vidyādharas, who are of good family, capable, heroic, wealthy, famous, possessing the fourfold army, known for guarding their subjects, free from blemish, faithful to engagements, always devoted to dharma, in Madhyadeśa, Vatsadeśa, [...] and other countries which are the ornaments of the eastern quarter; [... in the Vānavāsas, ...] these now, son, beg us constantly through messengers, who are sent bearing valuable gifts, to give their daughters to you. [...]”.

vanavāsa (वनवास).—m (S) Dwelling in a forest or wood. 2 A wild, wandering, unsettled manner of life. va0 āṇaṇēṃ acc. of o. To drive from house and home (through oppressive and harassing treatment); to force to flee to the jungle. vanavāsa is used in the sense of the vulgar corruption yavanāsa, Exceeding worry or harass.

vanavāsa (वनवास).—m Dwelling in a forest. A wild, wandering, unsettled manner of life. व?B āṇaṇēṃ Force to flee to the jungle; drive from home.

vāṇavasā (वाणवसा).—m A general term for the vows and religious obligations imposed upon themselves by women.

Chapter 12 - The Converting Of Different Countries

Chapter 29 - The Beginning Of The Great Thupa