Nayana means something in Buddhism, Pali, Hinduism, Sanskrit, the history of ancient India, Marathi, Jainism, Prakrit, Hindi. If you want to know the exact meaning, history, etymology or English translation of this term then check out the descriptions on this page. Add your comment or reference to a book if you want to contribute to this summary article.

Alternative spellings of this word include Nayan. 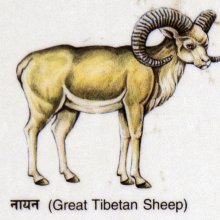 [«previous (N) next»] — Nayana in Vastushastra glossary
Source: McGill: The architectural theory of the Mānasāra

Nayana (नयन, “eye”).—Besides āyādiṣaḍvarga, three other astrological principles are also mentioned in passing in the text (Mānasāra chapter 9), without always giving their full list or the formula to ascertain them: rāśī, “zodiacal sign”, gaṇa, literally, “cluster”, and nayana, literally, “eye”.

For nayana, the formula is given as follows: the total days of the week, seven, is multiplied by three, and to it is added the nakṣatra of the day. The sum is then divided by seven. The remainder gives the nayana, in the order of ekanetra, one-eyed, dvinetra, two-eyed, and so on (netra being a synonym of nayana). It is not clear from this account how this principle is brought into relation with the architectural or iconographic object because no measurement of the object is engaged in the formula.

Nayana (नयन) refers to the “eyes”, according to the Bṛhatsaṃhitā (chapter 1), an encyclopedic Sanskrit work written by Varāhamihira mainly focusing on the science of ancient Indian astronomy astronomy (Jyotiṣa).—Accordingly, “[...] There was darkness (chaos) in the beginning. Then came water (into existence). On it (floated) a golden-coloured egg, the (divine) seed consisting of the Earth and the Firmament from which there arose Brahmā, the creative agent with the sun and moon for his eyes [i.e., arka-nayana]. Kapila says that the universe had its origin in pradhāna; Kaṇātha in dravya and the like; a few in kāla (time); others in Svabhāva (nature); and some in karma. [...]”.

Nayana (नयन) refers to the “eyes”, according to the Śivapurāṇa 2.3.9.—Accordingly, as Brahmā narrated to Sage Nārada:—“[...] The lord was completely agitated due to Satī’s love and separation from her. He performed his penance there. Pārvatī engaged herself in His service continuously accompanied by two of her maids. Although the lord Śiva was hit and wounded by the arrows of Kāma who was sent thither by the gods to enchant Him, He was not swayed at all. Burning Kāma there by His fiery eye [i.e., sva-vahni-nayana], on remembering my words, the lord became angry with me and vanished from the scene. [...]”.

Nayanā (नयना) refers to the “eyes” (representing the Sun and Moon), according to the Manthānabhairavatantra, a vast sprawling work that belongs to a corpus of Tantric texts concerned with the worship of the goddess Kubjikā.—Accordingly, “She who is KLĪṂ, the goddess Klinnā, accompanied by the Goddess and endowed with the consciousness of the Command is Vakrā whose form is the Triangle. Supreme with (the sacred energy of the) nasal (letters in her Vidyā), she is Parā, the foremost knowledge. She has three eyes. (As) the Sun and Moon she shines as the Ray (of divine light), and is the goddess called Ciñciṇī. I praise her, she who residing in the Void, is the goddess whose eyes are the Sun and Moon (raviśaśi-nayanā) and consists of thirty-two syllables”.

Nayana (नयन) represents the number 2 (two) in the “word-numeral system” (bhūtasaṃkhyā), which was used in Sanskrit texts dealing with astronomy, mathematics, metrics, as well as in the dates of inscriptions and manuscripts in ancient Indian literature.—A system of expressing numbers by means of words arranged as in the place-value notation was developed and perfected in India in the early centuries of the Christian era. In this system the numerals [e.g., 2—nayana] are expressed by names of things, beings or concepts, which, naturally or in accordance with the teaching of the Śāstras, connote numbers.

Nayana (नयन) refers to the “eyes”, according to Mahāprajñāpāramitāśāstra (chapter 41).—Accordingly, “[The eighteen āveṇika-dharmas (‘special attributes’)]— [...] (10). The Buddha has no loss of wisdom.—He has no loss of wisdom.—[...] Moreover, since his first production of the mind of awakening (prathama-cittotpāda) and for innumerable and incalculable periods (asaṃkhyeyakalpa), the Buddha has accumulated all the wisdoms and, in accordance with his high resolution (adhyāśaya), he has sacrificed his head (śiras), his eyes (nayana), his marrow (majjā) and his skull (mastaka), he has given all his inner and outer possessions, he has entered into fire, he has thrown himself down from mountains, he has flayed his skin, he has nailed his body, etc.; there is no suffering that he has not endured, careful to accumulate wisdom. This is why he has no loss of wisdom. [...]”.

Nayana.—(IE 8-1-2), ‘two’; cf. netra. Note: nayana is defined in the “Indian epigraphical glossary” as it can be found on ancient inscriptions commonly written in Sanskrit, Prakrit or Dravidian languages.

Ṇayaṇa (णयण) in the Prakrit language is related to the Sanskrit word: Nayana.

Nayaṇa (ನಯಣ):—[noun] an open hall raised on stone pillars, that has stone slabs for its roof, by the side of a mountain.

1) [noun] the act or an instance of conveying (something from one place to another).

2) [noun] the act of moving, travelling.

6) [noun] a bringing up with care; fostering.