Mena means something in Buddhism, Pali, Hinduism, Sanskrit, Jainism, Prakrit, Marathi, biology. If you want to know the exact meaning, history, etymology or English translation of this term then check out the descriptions on this page. Add your comment or reference to a book if you want to contribute to this summary article. 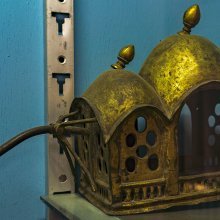 Himavān lord of the mountains and the seat of many minerals and fossils had two daughters of unparallelled beauty and their mother was the lovely Menā, daughter of Mahāmeru and wife of Himavān. (Sarga 35, Bāla Kāṇḍa, Vālmīki Rāmāyaṇa).

Rāmāyaṇa states that Menā had two daughters of extraordinary beauty named Gaṅgā and Umā. They were both married by Śiva.

But Vāmana Purāṇa in chapter 51 states that Menā had three beautiful daughters and a son named Sunābha. Menā’s first daughter was Rāgiṇī with red body and eyes and wearing a red dress. Her second daughter named Kuṭilā was white in colour, had lotus eyes, and wore white dress. The third was a girl of enchanting beauty named Kālī. She was blue-black in colour with eyes like the blue lotus leaf.

It can be surmised that the Umā of Rāmāyaṇa and Kālī were one and the same person by the following verse in the Amarakośa.

When the statements of the two Purāṇas are taken together Menā should have had four daughters, Gaṅgā, Rāgiṇī, Kuṭilā and Kālī and a son named Sunābha.

Accordingly, as Brahmā narrated to Nārada:—

“[...] the daughter Svadhā was given to the forefathers. She had three daughters all of whom were of handsome features and virtuous forms. O excellent sage, listen to their holy names which remove obstacles and confer blessings. Menā was the eldest. Dhanyā was the middle. Kalāvatī was the youngest. All these were mentally conceived daughters of the forefathers. They were not born of the womb of Svadhā. They were conventionally considered her children. On reciting their names, men can achieve their desires”.

Menā (मेना) or Menakā is mentioned as the wife of Himavat and the mother of Pārvatī, according to the Śivapurāṇa 2.3.1.

Accordingly, as Brahmā narrated to Nārada:

Menā was cursed by Sanatkumāra according to the Śivapurāṇa 2.3.2.—Accordingly, as Sanatkumāra said to the three sisters:—“[...] O ye three daughters of forefathers (i.e., Menā), listen with pleasure to my words that will dispel your sorrow and bestow happiness on you.  May the eldest among you become the wife of Himavat the mountain that is a part of Viṣṇu. Pārvatī shall be her daughter. [...] The Yoginī Menā shall attain the great region Kailāsa along with her body and in the company of her husband due to the boon of Pārvatī. [...] Ye the daughters of forefathers (i.e., Menā) shall shine in heaven. By the vision of Viṣṇu your evil actions have been quelled. [...] Menā’s daughter, goddess Pārvatī, the mother of the universe shall become Śiva’s beloved after performing severe penance”.

2b) A daughter of Svadhā and Pitṛs. A Brahmavādinī.*

Menā (मेना) refers to the name of a River mentioned in the Mahābhārata (cf. VI.10.22). Note: The Mahābhārata (mentioning Menā) is a Sanskrit epic poem consisting of 100,000 ślokas (metrical verses) and is over 2000 years old.

Meṇa (मेण) is a Sanskrit technical term referring to “wax”, and is dealt with in the 17th-century Vaidyavallabha written by Hastiruci.—The Vaidyavallabha is a work which deals with the treatment and useful for all 8 branches of Ayurveda. The text Vaidyavallabha (mentioning meṇa) has been designed based on the need of the period of the author, availability of drugs during that time, disease manifesting in that era, socio-economical-cultural-familial-spiritual-aspects of that period Vaidyavallabha.

1) Menā (मेना) is the name of a Yakṣiṇī mentioned as attending the teachings in the 6th century Mañjuśrīmūlakalpa: one of the largest Kriyā Tantras devoted to Mañjuśrī (the Bodhisattva of wisdom) representing an encyclopedia of knowledge primarily concerned with ritualistic elements in Buddhism. The teachings in this text originate from Mañjuśrī and were taught to and by Buddha Śākyamuni in the presence of a large audience (including Menā).

Menā (मेना) is the name of an Apsaras, instructed by Śakra to help in the preparations of Ṛṣabha’s wedding-preparations, according to chapter 1.2 [ādīśvara-caritra] of Hemacandra’s 11th century Triṣaṣṭiśalākāpuruṣacaritra (“lives of the 63 illustrious persons”): a Sanskrit epic poem narrating the history and legends of sixty-three important persons in Jainism.

“[...] Then having ascertained the Lord’s purpose, Purandara at once summoned gods for the tasks of the wedding-preparations.—‘[...] Menā, receive with delightful conversation the ones who have arrived. Sukeśī, bring the hair-omaments for the brides and groom; Sahajanyā, show the place to the men of the wedding procession. [...]’. From the bustling of the Apsarases instructing each other in this way, and frequently calling names, a mighty tumult arose”.

Mena in India is the name of a plant defined with Tamarix gallica in various botanical sources. This page contains potential references in Ayurveda, modern medicine, and other folk traditions or local practices It has the synonym Tamarix gallica Thunb. (among others).

If you are looking for specific details regarding Mena, for example diet and recipes, chemical composition, pregnancy safety, health benefits, side effects, extract dosage, have a look at these references.

2) [noun] a kind of adhesive paste prepared using the flour of some corns.

3) [noun] any of various solid or semisolid, viscous, yellowish or brownish organic substances exuded from various plants and trees, that is used as or in preparing adhesives; gum.

Chapter 77 - Apsaroyuga-saṅgama-tīrtha and other Holy Centres