Kataka means something in Buddhism, Pali, Hinduism, Sanskrit, the history of ancient India, Marathi, Hindi. If you want to know the exact meaning, history, etymology or English translation of this term then check out the descriptions on this page. Add your comment or reference to a book if you want to contribute to this summary article.

Alternative spellings of this word include Katak. 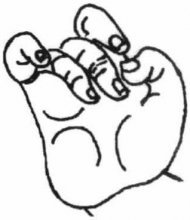 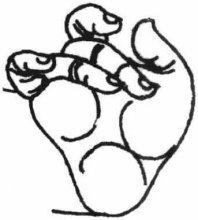 Kaṭaka (कटक) refers to a kind of ornament (ābharaṇa) for the fingers (aṅguli) to be worn by males, according to Nāṭyaśāstra chapter 23. Such ornaments for males should be used in cases of gods and kings.

Kaṭaka (कटक) also refers to a type of ornament (ābharaṇa) for the ankles (gulpha) to be worn by females. Kaṭakas are hollow bangles within which small stone chips are lodged. Such ornaments for females should be used in cases of human females and celestial beings (gods and goddesses).

Ābharaṇa (‘ornaments’, eg., kaṭaka) is a category of alaṃkāra, or “decorations”, which in turn is a category of nepathya, or “costumes and make-up”, the perfection of which forms the main concern of the Āhāryābhinaya, or “extraneous representation”, a critical component for a successful dramatic play.

Kaṭaka (कटक) refers to the “middle part” of a mountain (giri) according to the second chapter (dharaṇyādi-varga) of the 13th-century Raj Nighantu or Rājanighaṇṭu (an Ayurvedic encyclopedia). The Dharaṇyādi-varga covers the lands, soil, mountains [viz., Kaṭaka], jungles and vegetation’s relations between trees and plants and substances, with their various kinds.

Kataka (कतक) refers to the medicinal plant known as “Strychnos potatorum Linn.” and is dealt with in the 15th-century Yogasārasaṅgraha (Yogasara-saṅgraha) by Vāsudeva: an unpublished Keralite work representing an Ayurvedic compendium of medicinal recipes. The Yogasārasaṃgraha [mentioning kataka] deals with entire recipes in the route of administration, and thus deals with the knowledge of pharmacy (bhaiṣajya-kalpanā) which is a branch of pharmacology (dravyaguṇa).

[«previous (K) next»] — Kataka in Shilpashastra glossary
Source: Shodhganga: The significance of the mūla-beras (śilpa)

Kaṭaka (कटक) or Kaṭakahasta refers to “crab-hold” and represents one of the twenty-four gestures with a single hand, as defined according to texts dealing with śilpa (arts and crafs), known as śilpaśāstras.—Accordingly, pratimā-lakṣaṇa (body postures of the icons) is comprised of hand gestures (hasta, mudrā or kai-amaiti), stances/poses (āsanas) and inflexions of the body (bhaṅgas). There are thirty-two types of hands [viz., kaṭaka-hasta] classified into two major groups known as tolirkai (functional and expressive gestures) and elirkai (graceful posture of the hand).

Kaṭaka (कटक) refers to a “chain with link” and represents a type of “hand-ornaments” (hastabhūṣaṇa), as defined in treatises such as the Pāñcarātra, Pādmasaṃhitā and Vaikhānasa-āgamas, extensively dealing with the technical features of temple art, iconography and architecture in Vaishnavism.—There are a number of ornaments for hand and arms. According to Bharata, [viz., kalāpī (string of pearls), kaṭaka (chain with link ), śaṅkha (bracelet of conches), hastapatra (bracelet with design of creepers), pūraka (a flat bracelet) are the ornament for hand fist and upper part of wrist; and rings are meant for fingers].

A village in Ceylon granted by Aggabodhi IV. for the maintenance of the padhanaghara, which he built for the Elder Dathasiva. Cv.xlvi.12.

Kaṭaka (कटक) refers to a name-ending for place-names mentioned in the Gupta inscriptions (reigned from 3rd century CE). Kaṭaka is formed from the root √kaṭ to surround, to encompass, to cover and means a “royal camp”.

There is only one such place-name with the suffix “Kaṭaka”: Gupta inscription No. 29, L. 12, but the first part is not clearly legible. Sircar takes it to be bhrātṛ but does not seem to be correct as it yields nosense with the word Kaṭaka. The donated land is mentioned to have been given to the Chandoga (Sāmavedin) brāhmaṇa Varāha-svāmin, an inhabitant of this Kaṭaka.

Kaṭaka.—(EI 8, 17), the camp or capital. (SITI), a fortified place; a cantonment; a military camp. Cf. kaṭakaṃ kartavyam (LP), ‘an army should be sent [against one]’. Note: kaṭaka is defined in the “Indian epigraphical glossary” as it can be found on ancient inscriptions commonly written in Sanskrit, Prakrit or Dravidian languages.

kāṭaka (काटक).—m A description of people or an individual of it in the Carnatic, very savage and blood-thirsty. Hence applied to cut-throat people gen.

1) A royal capital or metropolis (rājadhānī).

13) A ring placed as an ornament upon an elephant's tusk.

14) Name of the capital of Orissa.

Kāṭaka (काटक).—(-kāṭaka), nt., in pātra-kāṭakam Mahāvyutpatti 8952, ring or which the almsbowl is fastened, = Tibetan lhuṅ gzed (bzed gzhag paḥi gdu bu, ring for putting almsbowl. [Boehtlingk and Roth] cite the passage with kaṭaka (as in Sanskrit and Pali), but Mironov also kā°; no v.l. in either ed. (but Index to Kyoto ed. cites both forms). However a form found with the same meaning in Divyāvadāna and Avadāna-śataka is -karaka or -kara, qq.v. On the other hand, Divyāvadāna likewise has a form kaṇṭaka, q.v., clearly meaning the same thing, which raises doubts as to the [etymology] Cf. kaṭaka.

(-kaḥ) The clearing nut plant, (Strychnos potatorum:) one of the seeds of this plant being rubbed upon the inside of the water jars used in Bengal, occasions a precipitation of the earthy particles diffused through the water.

Kataka (कतक).—[masculine] the Kataka tree; [neuter] the nut of it (used for clearing water).

17) Kataka (कतक):—[from kata] m. Strychnos Potatorum or the clearing nut plant (its seeds rubbed upon the inside of water-jars precipitate the earthy particles in the water, [Horace H. Wilson]), [Manu-smṛti vi, 67; Suśruta]

Search found 34 books and stories containing Kataka, Kaṭaka, Kāṭaka; (plurals include: Katakas, Kaṭakas, Kāṭakas). You can also click to the full overview containing English textual excerpts. Below are direct links for the most relevant articles:

Verse 6.67 < [Section VI - Procedure of going forth as a Wandering Mendicant]