Granthi means something in Buddhism, Pali, Hinduism, Sanskrit, Marathi, Hindi, biology. If you want to know the exact meaning, history, etymology or English translation of this term then check out the descriptions on this page. Add your comment or reference to a book if you want to contribute to this summary article.

The deranged and unusually aggravated Vāyu etc. (Pittam and Kapham), by vitiating the flesh, blood and fat mixed with the Kapham (of any part of the organism), give rise to the formation of round, knotty, elevated swellings which are called Granthi (Glandular inflammation).

Granthi (ग्रन्थि) refers to “cyst” and is one of the various diseases mentioned in the 15th-century Yogasārasaṅgraha (Yogasara-saṅgraha) by Vāsudeva: an unpublished Keralite work representing an Ayurvedic compendium of medicinal recipes. The Yogasārasaṃgraha [mentioning granthi] deals with entire recipes in the route of administration, and thus deals with the knowledge of pharmacy (bhaiṣajya-kalpanā) which is a branch of pharmacology (dravyaguṇa).

Granthi refers to a kind of scrofula. (see Bhudeb Mookerji and his Rasajalanidhi)

[«previous (G) next»] — Granthi in Shaivism glossary
Source: academia.edu: The Śaiva Yogas and Their Relation to Other Systems of Yoga

Earlier scriptural lists usually located only five granthis in the course of the vital energy (prāṇacāra) as the seats of the five Cause-deities (kāraṇa):

In the systematization presented at Netratantroddyota 7.1cd–5 this has been expanded to twelve granthis.

Granthi (ग्रन्थि) or Navagranthi refers to “knots” or “joints”, according to verse 4.497ff of the Brahmayāmala-tantra (or Picumata), an early 7th century Śaiva text consisting of twelve-thousand verses.—Accordingly, “[...] A series of nine lotuses is visualized situated at points in the body called granthis (knots or joints). These are located at the crown of the head (śikhā), the forehead (lalāṭa), throat (kaṇṭha), navel (nābhi), knees (jānu), mouth (vaktra), heart (hṛd), genitals (guhya), and feet (pāda), following the order of their sequence in nyāsa. [...]”.

Note: The noun ‘granthi’ is normally masculine but is treated here as feminine presumably because each Knot is an energy or aspect of the goddess.

The Knots are in the following places in the body:

Granthi (ग्रन्थि) refers to the “joints”, according to the Pañcadaśī verse 7.140-141.—Accordingly: “What is there attractive in the cage‐like body, ever restless like a machine, of a woman who is but a doll made of flesh and consisting of nerves, bones and joints [i.e., snāyu-asthi-granthi]? Such are the defects of worldly pleasures, elaborately pointed out by the scriptures. No wise man, aware of these defects, will allow himself to be drowned in afflictions caused by them. [...]”.

Granthi (ग्रन्थि) is of three kinds (Brahmagranthi, Viṣṇugranthi and Rudragranthi) which are situated along the central channel of the body and are to be pierced by the mahāvedha, according to the Amṛtasiddhi, a 12th-century text belonging to the Haṭhayoga textual tradition.

Granthi (ग्रन्थि) refers to a “knot (tied in one’s robe)”, according to the 2nd-century Meghasūtra (“Cloud Sutra”) in those passages which contain ritual instructions.—Accordingly, “In the end of one’s robe a knot must be tied (granthi-bandha) with seven prayers by the prophet of the Law after he has previously made provision for his safety. This ‘Whirlwind’-Chapter, (also) called “The heart of all Serpents,” must be recited. [...]”

granthi (ग्रंथि).—m (S) granthikā f S A knot. 2 A knot or knob (in wood &c.) 3 A knot or joint of a reed; and fig. of the body. 4 fig. A tie, bond, connection (as of marriage &c.) 5 fig. A complexity or perplexity; any tangle or snare; or any entangling or ensnaring cause; as mōhagranthi, māyāgranthi, saṃśaya- granthi, ajñānagranthi.

granthi (ग्रंथि).—m granthikā f A knot. A tie. A per- plexity, any tangle or snare.

7) Swelling and hardening of the vessels of the body.

Granthi (ग्रन्थि) in the Sanskrit language is related to the Prakrit word: Gaṃṭha.

1) [noun] something that is binding, tying, joining together, etc.; a tie; a knot; a bond.

3) [noun] a short, thickened, fleshy part of an underground stem, as a potato; a tuber.

4) [noun] (anat.) a place or part where two bones or corresponding structures are joined, usu. so that they can move; a joint.

5) [noun] a tumour a) a swelling on some part of the body; b) a mass of new tissue growth independent of its surrounding structures, having no physiological function either benign or malignant; a neoplasm.

6) [noun] 'any organ or specialised group of cells that produces secretions, as insulin or bile or excretions, as urine: a gland.'7) [noun] a particular type of stomach ache.

Chapter II - Pathology of the diseases of the eye-joints < [Canto I - Shalakya-tantra (ears, eyes, nose, mouth and throat)] 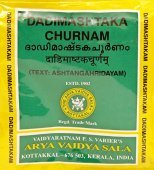 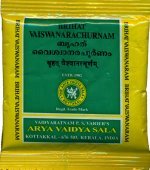