Balarama means something in Hinduism, Sanskrit, Jainism, Prakrit. If you want to know the exact meaning, history, etymology or English translation of this term then check out the descriptions on this page. Add your comment or reference to a book if you want to contribute to this summary article. 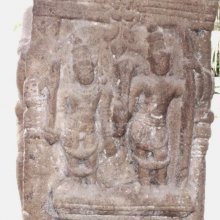 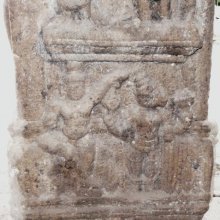 [«previous (B) next»] — Balarama in Natyashastra glossary
Source: archive.org: The mirror of gesture (abhinaya-darpana)

Balarāma (बलराम).—A son of Vasudeva1 and Rohiṇī and an aṃśa of Hari; (also Baladeva, Balabhadra, Sīrāyudha); the dhāma of Hari in the womb of Devakī transferred to that of Rohiṇī by Yogamāyā; on account of this he is Saṅkarṣaṇa; also Rāma on account of his pleasant personality and Bala on account of his strength; his nāmakaraṇa;1 was bewildered at Baka seizing Kṛṣṇa; became glad at his escape; entered the palmyra grove, vanquished the Asura Dhenuka and his kin and gladdened the cow-herds; advised Nanda and others to keep cool when Kṛṣṇa was enclosed in the coils of the reptile, and stopped their getting into the pool of Kālīya; his joy at Kṛṣṇa's escape from Kālīya; was carried by Pralamba on his back when he won in a certain game; but finding him to be an Asura in the guise of a gopa, he knocked his head with his fist and killed him for which the Devas praised him;2 his surprise at Kṛṣṇa's holding aloft the Govardhana; was in charge of the women rescued by Kṛṣṇa from Śankhacūḍa and was presented with the Cūḍāmaṇi of Śankhacūḍa.3

[«previous (B) next»] — Balarama in Vyakarana glossary
Source: Wikisource: A dictionary of Sanskrit grammar

[«previous (B) next»] — Balarama in Shilpashastra glossary
Source: Shodhganga: The significance of the mūla-beras (śilpa)

Balarāma (बलराम) or Balarāmāvatāra refers to one the “ten incarnations of Lord Viṣṇu”, as defined according to texts dealing with śilpa (arts and crafs), known as śilpaśāstras.—The hand gestures for the daśāvatāra in dancing and iconography are similar in some cases and dissimilar in most of the cases. The balarāma-avatāra-hasta in dance is depicted with the right hand and the left hand in patāka and muṣṭi-hastas respectively. In images, Balarāma is depicted with gadā and koumadaki and sometimes with bow and arrow in vaiṣṇava-sthānaka. The hands assume śikhara-hasta, denoting the act of ploughing. The distinctive emblem of this god is the plough which he holds in his right hand in muṣṭi or śikhara and the other hand hangs loose in the images.

Balarama was the brother of Krishna. He was a matchless warrior with the mace and was the teacher of both Bheema and Duryodhana. He wanted to take part in the war on the side of Duryodhana, but as his brother Krishna was on the Pandava side, he decided to remain neutral.

[«previous (B) next»] — Balarama in Jainism glossary
Source: WikiPedia: Jainism

Balarāma (बलराम) (or Baladeva, Balabhadra, Rāma, Bala) refers to a set of nine “gentle heroes” and half-brothers of Vasudevas (or Viṣṇus, Nārāyaṇas), mentioned in both Śvetāmbara and Digambara literature.—In every half time cycle, there are 9 sets of Balabhadras (gentle heroes), Vasudevas (violent heroes) and Prativāsudevas (anti-heroes). Baladevas, half-brothers of Vasudevas, are described as fair in complexion and wear garments of dark blue and have a banner of palm tree. Their symbols or weapons are: bow, plough, pestle and arrow. The two brothers are inseparable and they jointly rule three continents as half-Chakravarti. Although Narayana is the mightier of the two, Balabhadra is depicted as superior for his non-violent ways and he achieves liberation. According to the Jain puranas, the Balabhadras lead an ideal Jain life.

[«previous (B) next»] — Balarama in Sanskrit glossary
Source: DDSA: The practical Sanskrit-English dictionary

Balarāma (बलराम).—'the strong Rāma', Name of the elder brother of Kṛṣṇa. [He was the seventh son of Vasudava and Devakī; but transferred to the womb of Rohiṇī to save him from falling a prey to the cruelty of Kaṃsa. He and his brother Kṛṣṇa were brought up by Nanda in Gokula. When quite young, he killed the powerful demons Dhenuka and Pralamba, and performed, like his brother, many feats of surprising strength. On one occasion Balarāma under the influence of wine, of which he was very fond, called upon the Yamunā river to come to him that he might bathe; and on his command being unheeded, he plunged his plough-share into the river and dragged the waters after him, until the river assumed a human form and asked his forgivenss. On another occasion he dragged towards himself the whole city of Hastināpura along with its walls. As Kṛṣṇa was a friend and admirer of the Pāṇḍavas, so Balarāma was of the Kauravas, as was seen in his desire of giving his sister Subhadrā to Duryodhana rather than to Arjuna; yet he declined to take any part in the great Bhāratī war either with the Pāṇḍavas or the Kauravas. He is represented as dressed in blue clothes, and armed with a ploughshare which was his most effective weapon. His wife was Revatī. He is sometimes regarded as an incarnation of the serpent Śeṣa and sometimes as the eighth incarnation of Viṣṇu; see the quotation under हल (hala)].

Balarāma is a Sanskrit compound consisting of the terms bala and rāma (राम).

(-maḥ) The demi-god named Balarama, half brother to Krishna, and the third of the Ramas; according to some, the eighth Avatar of Vishnu. E. bala strength, ram to sport, aff. ghañ .

Balarāma is a Sanskrit compound consisting of the terms bala and rāma (राम).

Balarāma (बलराम):—[=bala-rāma] [from bala > bal] m. Name of the elder brother of Kṛṣṇa and third of the Rāmas (regarded as the 8th Avatāra of Viṣṇu, sometimes as an incarnation of the great serpent Śeṣa or An-anta; he is also called Bala, Bala-deva, Bala-bhadra, and Halāyudha, cf. [Indian Wisdom, by Sir M. Monier-Williams 332 etc.]), [Mahābhārata; Purāṇa]

Chapter 12 - Manifestation of Viṣṇu as Kṛṣṇa

Chapter 275 - Description of the dynasty of Yadu (yaduvaṃśa)

The Killing of Pralamba < [Fifth Section]

The Death of Dvivida < [Fifth Section]