Amoghasiddhi means something in Buddhism, Pali, Hinduism, Sanskrit. If you want to know the exact meaning, history, etymology or English translation of this term then check out the descriptions on this page. Add your comment or reference to a book if you want to contribute to this summary article. 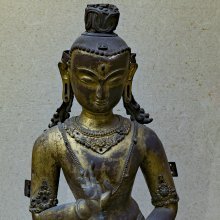 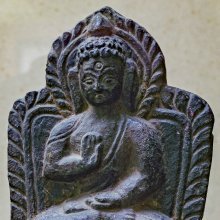 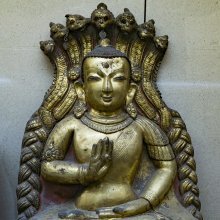 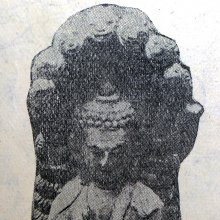 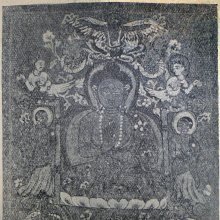 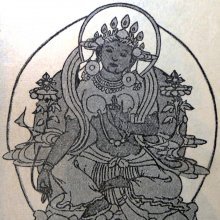 Amoghasiddhi is a name of Mañjuśrī (the embodiement of non-dual knowledge) and, together with other names, forms the core essence of the Mañjuśrīnāmasaṃgīti. The Nāmamantrārthāvalokinī provides the practitioner a sādhana (‘meditative practice’) to turn these names into mantras. These mantras are chanted for the benefit of all beings, and then placed and contemplated in the Vajradhātu-mahāmaṇḍala, which is an extended version of the Vajradhātu-maṇḍala.

Amoghasiddhi (अमोघसिद्धि) refers to one of the Dhyāni-Buddhas, according to Vajrayāna or Tantric Buddhism.—His Śakti, or female counterpart (spiritual consort) is named Tārā and their Bodhisattva offspring is named Viśvapāṇi.—His color is green; his mudrā is abhaya; his vāhana is Garuḍa; and his symbol is viśvavajra.—The Nepalese Buddhists consider Amoghasiddhi to be the Fifth Dhyāni Buddha in order. His left hand lies open on the lap and the right exhibits the Abhaya (protection) mudrā.

Vairocana is described in the Advayavajrasaṃgraha thus:—“Amoghasiddhi originates from the green syllable Khaṃ placed on the orb of the sun on the northern petal of the lotus, and is of green colour. His recognition symbol is the Viśvavajra or the double thunderbolt. He exhibits the Abhaya (protection) mudrā and represents the cosmic element of Saṃskāra (conformation). He is the embodiment of the rainy season and is ademon by nature; [he belongs to the Karma family] and herepresents the bitter taste, the Pa (labial) group of letters and the middle part of the night”.

When represented, Amoghasiddhi’s colour is green and he always faces the North. His Vāhana is a pair of Garuḍas and his recognition symbol is the Viśvavajra or the double conventional thunderbolt. Sometimes a serpent with seven hoods forms the background and an umbrella. In front of his shrine, therefore, is found a small square pit which is meant for the snake.

Amoghasiddhi (अमोघसिद्धि) is the name of a deity to be contemplated upon by a practicioner purifying his correspondences (viśuddhi), according to the 12th-century Abhisamayamañjarī. Amoghasiddhi is alternatively known by the name Vajrarāja. The contemplation is prescribed as a preliminary ritual for a yogin wishing to establish, or reestablish the union with a deity.

Amoghasiddhi is associated with the skandha named saṃskāra (volition) and the color green. He is to be visualised as standing in the warrior (ālīḍha) stance, having three eyes, matted locks and bearing the five signs of observance (mudrā).

Amoghasiddhi (अमोघसिद्धि) is the name of a deity [i.e., oṃ amoghasiddhaye svāhā], according to the Guru Mandala Worship (maṇḍalārcana) ritual often performed in combination with the Cakrasaṃvara Samādhi, which refers to the primary pūjā and sādhanā practice of Newah Mahāyāna-Vajrayāna Buddhists in Nepal.—

Amoghasiddhi (अमोघसिद्धि) refers to “unfailing Buddha” and represents one of the “five Buddhas” (pañcabuddha) as defined in the Dharma-saṃgraha (section 3). The Dharma-samgraha (Dharmasangraha) is an extensive glossary of Buddhist technical terms in Sanskrit (e.g., pañcabuddha and Amoghasiddhi). The work is attributed to Nagarguna who lived around the 2nd century A.D.

One of the five celestial Buddha of the Mahayana Buddhism, Amoghasiddhi literally means the Unfailing success. He is shown in green colour with his left hand in his lap and his right hand making gesture of fearlessness.

[«previous (A) next»] — Amoghasiddhi in Sanskrit glossary
Source: DDSA: The practical Sanskrit-English dictionary

Amoghasiddhi is a Sanskrit compound consisting of the terms amogha and siddhi (सिद्धि).

Search found 12 books and stories containing Amoghasiddhi, Amogha-siddhi; (plurals include: Amoghasiddhis, siddhis). You can also click to the full overview containing English textual excerpts. Below are direct links for the most relevant articles:

Chapter 6 - The Rewards of the Survey

Part 8 - The ways in which the highest three are the principal ones < [A. Resolving the view]

Part 9 - She Knows That She's Not Real

The Dawn of the Dhamma (by Sucitto Bhikkhu)