Tripurantaka means something in Hinduism, Sanskrit. If you want to know the exact meaning, history, etymology or English translation of this term then check out the descriptions on this page. Add your comment or reference to a book if you want to contribute to this summary article. 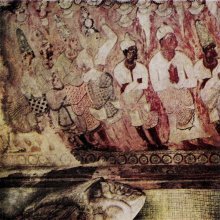 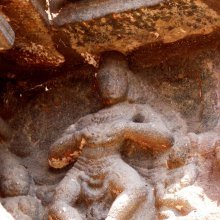 1) Tripurāntaka (त्रिपुरान्तक, “The one who has burnt three forts (active, dream, deep sleep)”):—One of the eleven epithets of Rudra, as adressed to in the second chapter of Śrī-rudram. These names represent his various attributes.

2) Tripurāntaka (त्रिपुरान्तक) is the Sanskrit name of a deity presiding over Kailāsa, one of the sixty-eight places hosting a svāyambhuvaliṅga, which is one of the most sacred of liṅgas according to the Śaivāgamas. The list of sixty-eight svāyambhuvaliṅgas and presiding deities (e.g., Tripurāntaka) is found in the commentary on the Jirṇoddhāra-daśaka by Nigamajñānadeva. The word liṅga refers to a symbol used in the worship of Śiva and is used thoughout Śaiva literature, such as the sacred Āgamas.

Tripurāntaka (त्रिपुरान्तक) is a Sanskrit name referring to one of the eight manifestations of Unmatta, who is a form of Bhairava. According to the Rudrayāmala, there are eight main forms of Bhairava who control the eight directions of this universe. Each form (e.g., Unmatta) has a further eight sub-manifestations (e.g., Tripurāntaka), thus resulting in a total of 64 Bhairavas.

When depicting Tripurāntaka according to traditional iconographic rules (śilpaśāstra), one should depcit him (and other forms of Unmatta) having a white color and good looks; he should carry in his hands the kuṇḍa, the kheṭaka, the parigha (a kind of club) and bhiṇḍipāla. The word Śilpaśāstra refers to an ancient Hindu science of arts and crafts, dealing with subjects such as painting, sculpture and iconography.

1) Tripurāntaka (त्रिपुरान्तक) or Tripurāntakamūrti refers to one of the eighteen forms (mūrti) of Śiva mentioned in the Kāraṇāgama (pratimālakṣaṇavidhi-paṭala): the fourth among the Siddhāntaśaivāgamas. The forms of Śiva (e.g., Tripura-antaka) are established through a process known as Sādākhya, described as a five-fold process of creation.

Tripurantaka images are called Tripura-samhara-murti, Tripura-sundara, Tripura-vijaya, Purari and by other names. The images may, according to texts, have 2,4,8,or 10 arms. Some texts list eight types of Tripurantaka images, the differences between them being mainly in the postures of legs and arms.

Siva as Tripurantaka should always be accompanied by his consort Gauri Uma. Of the legs only the left should be placed on the dwarf. These have symbolic as well as deep theological meanings.

The Aghora-sivacharya-paddhati, an influential text states that the image of Tripurantaka should be taken in procession on the sixth day of the annual festival.

There are several segments in the legend of Tripurantaka Siva. The Asuras of Tripura were originally worshipers of Linga but were so arrogant they were causing havoc in the worlds. The Devas performed a Vedic sacrifice called Upasad which gave them a very powerful weapon but the Devas were unable to use it and so they approached Rudra to discharge the weapon.

The ultimate message of Tripurantaka legend is to worship Siva through a Linga and become Siva, meaning achieve unfettered, unbounded knowledge. "The myth of Siva is the myth of God as consciousness" says Stella Kramrisch (Manifestations of Siva p. xxiii)

Procession of Tripurantaka images are prescribed under two headings in agamic texts. One list gives the names of metal images to be taken out in Procession. For example the Suprabheda-agama gives the following list:—

Similarly all the agamas give the nature of different festivals as