Shadbhuja means something in Buddhism, Pali, Hinduism, Sanskrit, Marathi. If you want to know the exact meaning, history, etymology or English translation of this term then check out the descriptions on this page. Add your comment or reference to a book if you want to contribute to this summary article.

The Sanskrit term Ṣaḍbhuja can be transliterated into English as Sadbhuja or Shadbhuja, using the IAST transliteration scheme (?). 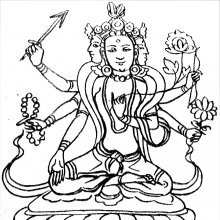 Ṣaḍbhuja (षड्भुज) or Ṣaḍbhuja-Sitatārā refers to a deity from the White Tārā family, according to Buddhist Iconography.—As she [viz., Ṣaḍbhuja-Sitatārā] bears the image of Amoghasiddhi on the crown, her form has already been described. She is three-faced and six-armed and has no companions. [...] Strictly speaking, only those deities can be called Tārās to whom the mantra: “oṃ tārā tuttāre ture svāhā” is assigned. [...] From the colour of the different Tārās it will be possible to refer them [viz., Ṣaḍbhuja] to their respective Kulas or families presided over by the five Dhyāni Buddhas.