Ekapada means something in Hinduism, Sanskrit. If you want to know the exact meaning, history, etymology or English translation of this term then check out the descriptions on this page. Add your comment or reference to a book if you want to contribute to this summary article. 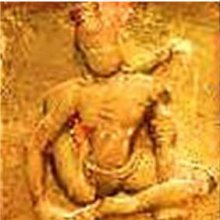 Ekapāda (एकपाद) or Ekapādamūrti refers to one of the twenty-eighth forms (mūrti) of Śiva mentioned in the Vātulāgama: twenty-eighth among the Siddhāntaśaivāgama. The forms of Śiva (e.g., Ekapāda) are established through a process known as Sādākhya, described as a five-fold process of creation.

Ekapada (एकपद).—A country of ancient Bhārata. The King and the people of this country came to the Rājasūya of Yudhiṣṭhira but were prevented from entering inside because of the uncontrollable crowd inside. (Śloka 17, Chapter 51, Sabhā Parva, Mahābhārata).

Ekapāda (एकपाद) is a name mentioned in the Mahābhārata (cf. II.28.47, II.47.16) and represents one of the many proper names used for people and places. Note: The Mahābhārata (mentioning Ekapāda) is a Sanskrit epic poem consisting of 100,000 ślokas (metrical verses) and is over 2000 years old.

Ekapāda (एकपाद) or Ekapādapurāṇa refers to one of the eighteen Minor Puranas (i.e., Upapurāṇa) according to the Devībhāgavatapurāṇa and other traditional lists of Puranic literature: a category of ancient Sanskrit texts which gives a huge contribution in the development of Indian literature.—The Upapurāṇas (e.g., ekapāda-purāṇa) can be considered as the supplements of the Mahāpurāṇas as those are mostly based on the Mahāpurāṇas. The Saurapurāṇa considers the Upapurāṇas as khilas i.e., supplements. [...] Though the numbers of Upapurāṇas are specified as eighteen, there are many important Upapurāṇas which are excluded from the lists of Upapurāṇas given by different sources.

1) Ekapāda (एकपाद) refers to “the liṅga of one foot”, according to the second recension of the Yogakhaṇḍa of the Manthānabhairavatantra, a vast sprawling work that belongs to a corpus of Tantric texts concerned with the worship of the goddess Kubjikā.—Accordingly, as the Goddess (i.e., Khageśī) said to the God (i.e., Bhairava), “(The Liṅga has) one foot (ekapāda—i.e. E) . It is located in (the midst of) three energies and is adorned with the qualities of the three measures. (In five nights), O lord, I will burst apart the Liṅga. I will reveal myself and I will tell you (the teachings of the) Kula”.

2) Ekapāda (एकपाद) refers to the “plane of the one-footed”, according to the Manthānabhairavatantra.—Accordingly, “The plane of the One-footed (ekapāda i.e. the letter E) is where the Skyfarer is in the Skyfarer within the Cavity of the Hair. Śrīdeva is above Meru (the triangle above the head) (merupaścima) in the essential nature of the Void (kha), which is the threefold measure (of energy) (mātra). [...]”.

Ekapāda (एकपाद) or Ekapādatantra refers to one of the thirty-three Dakṣiṇatantras, belonging to the Śāktāgama (or Śāktatantra) division of the Āgama tradition. The Śāktāgamas represent the wisdom imparted by Devī to Īśvara and convey the idea that the worship of Śakti is the means to attain liberation. According to the Pratiṣṭhālakṣaṇasamuccaya of Vairocana, the Śāktatantras are divided into to four parts, the Ekapāda-tantra belonging to the Dakṣiṇa class.

[«previous (E) next»] — Ekapada in Natyashastra glossary
Source: Shodhganga: The significance of the mūla-beras (natya)

Ekapāda (एकपाद) is one of the six divisions of sthānaka, one of the nine maṇḍala (postures of the feet) which in turn represents one of the four “movements of the feet” (pāda) according to the Abhinayadarpaṇa. Ekapāda-sthānaka is found in both the arts as standing on one leg and placing the other leg on the knee of the first leg obliquely or placed on the genitals of the image with the foot facing upward. In iconography, this division of ekapāda does not come under the heading sthānaka, but is found under sthānāsana.

Ekapada (एकपद) refers to a country belonging to “Pūrvā or Pūrvadeśa (eastern division)” classified under the constellations of Ārdrā, Punarvasu and Puṣya, according to the system of Kūrmavibhāga, according to the Bṛhatsaṃhitā (chapter 14), an encyclopedic Sanskrit work written by Varāhamihira mainly focusing on the science of ancient Indian astronomy astronomy (Jyotiṣa).—Accordingly, “The countries of the Earth beginning from the centre of Bhāratavarṣa and going round the east, south-east, south, etc., are divided into 9 divisions corresponding to the 27 lunar asterisms at the rate of 3 for each division and beginning from Kṛttikā. The constellations of Ārdrā, Punarvasu and Puṣya represent the eastern division consisting of [i.e., Ekapada] [...]”.

3) the time required to pronounce a single word.

-dā a verse consisting of only one Pāda or quarter stanza. (-dī) 1 a woman having one foot.

Ekapada is a Sanskrit compound consisting of the terms eka and pada (पद).

Ekapada is a Sanskrit compound consisting of the terms eka and pada (पद).

Ekapada (एकपद).—2. [adjective] measuring only one step; having one foot; consisting of one word.

1) [adjective] having one leg only.

2) [adjective] using one leg only.

1) [noun] the posture of standing on one leg only.