Vajrapani means something in Buddhism, Pali, Hinduism, Sanskrit, the history of ancient India. If you want to know the exact meaning, history, etymology or English translation of this term then check out the descriptions on this page. Add your comment or reference to a book if you want to contribute to this summary article. 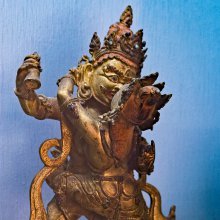 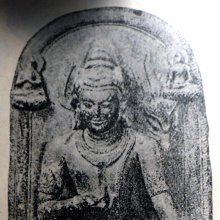 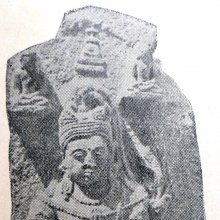 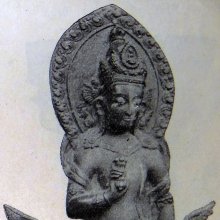 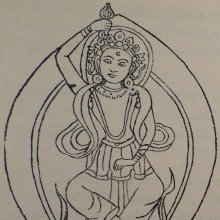 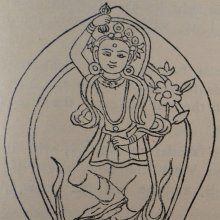 Vajrapāṇi (वज्रपाणि) or Vajrapāṇirasa is the name of an Ayurvedic recipe defined in the fourth volume of the Rasajalanidhi (chapter 7, enlargement of spleen [plīhodara] and liver [yakṛdudara]). These remedies are classified as Iatrochemistry and form part of the ancient Indian science known as Rasaśāstra (medical alchemy). However, since it is an ayurveda treatment it should be taken with caution and in accordance with rules laid down in the texts.

Accordingly, when using such recipes (e.g., vajrapāṇi-rasa): “the minerals (uparasa), poisons (viṣa), and other drugs (except herbs), referred to as ingredients of medicines, are to be duly purified and incinerated, as the case may be, in accordance with the processes laid out in the texts.” (see introduction to Iatro chemical medicines)

Vajrapāṇi (वज्रपाणि) is the name of a Bodhisattva mentioned as attending the teachings in the 6th century Mañjuśrīmūlakalpa: one of the largest Kriyā Tantras devoted to Mañjuśrī (the Bodhisattva of wisdom) representing an encyclopedia of knowledge primarily concerned with ritualistic elements in Buddhism. The teachings in this text originate from Mañjuśrī and were taught to and by Buddha Śākyamuni in the presence of a large audience (including Vajrapāṇi).

1) Vajrapāṇi (वज्रपाणि) is the name of the Bodhisattva offspring associated with Akṣobhya: one of the Dhyāni-Buddhas, according to Vajrayāna or Tantric Buddhism.—His colour is blue; and his symbol is the vajra.—The Bodhisattva Vajrapāṇi with the Vajra symbol is the spiritual son of the Dhyāni Buddha Akṣobhya who is the progenitor of the Vajra family. His spiritual mother is Māmakī. Vajrapāṇi, when represented, either stands or sits and carries usually a lotus on which is placed the family symbol of Vajra. Sometimes he holds the Vajra against the chest in one of his hands.

Vajrapāṇi as the name of a Bodhisattva commonly depicted in Buddhist Iconography, and mentioned in the 5th-century Sādhanamālā.—his color is white; his symbol is the vajra. Vajrapāṇi is described in the Sādhanamālā (Lokanāthsādhana) as follows:—

“Vajrapāṇi is of white colour, carries the Vajra in one hand and displays the Abhaya-mudrā in the other”.

“Vajrapāṇi again is identical with [Piṇḍapātra Lokeśvara], in all respects except that here the god holds the Vajra on his head with his right hand, while the empty left is held near the navel. The attitude in which he stands is also different. He shows the dancing attitude in Ardhaparyaṅka.—Piṇḍapātra Lokeśvara is one-faced and two-armed and stands on a lotus. He holds the Piṇḍapātra (the bowl) in his two hands near the navel”.

The names of the 108 deities [viz., Vajrapāṇi] possbily originate from a Tantra included in the Kagyur which is named “the 108 names of Avalokiteshvara”, however it is not yet certain that this is the source for the Nepali descriptions.Source: Wisdomlib Libary: Vajrayogini

Vajrapāṇi (वज्रपाणि) is the name of a deity to be contemplated upon by a practicioner purifying his correspondences (viśuddhi), according to the 12th-century Abhisamayamañjarī. Vajrapāṇi is alternatively known by the name Dveṣavajra because he is the enemy of malice (dveṣa). The contemplation is prescribed as a preliminary ritual for a yogin wishing to establish, or reestablish the union with a deity.

Vajrapāṇi (वज्रपाणि) is the name of an ancient Tibetan tantric deity.—The iconographic group of Vajrapāṇi and the eight Nāga Kings is so far scarcely studied. As is well-known, Mahāyāna considers Vajrapāṇi as one of the eight great Bodhisattvas, disciples of the Buddha and the major auditor and protector of Tantric texts received from the Buddha in the form of Vajradhāra. It is no surprise then that his image obtained an important place in the Vajrayāna tradition. The image of the Two-Handed Wrathful Vajrapāṇi is among the most wide-spread and familiar in Tibetan Buddhist arts.

In the Sarvadurgatipariśodhana-tantra, Vajrapāṇi is depicted as an one-faced, two-handed deity of white color and peaceful appearance, the eight Nāga Kings located in petals of a lotus surrounding the central figure. The joint use of their images in one maṇḍala can be connected with a legend on the taming of a gigantic serpent by the Buddha in Uddayana when he appointed Vajrapāṇi the protector of the nāgas against their enemies Garuḍas. At the same time, Vajrapāṇi is a commander of the Nāgas and can be depicted in the wrathful form.

Vajrapāṇī (वज्रपाणी) or Pāṇi is the name of a Ḍākinī who, together with the Vīra (hero) named Vajrapāṇa [or Pāṇa] forms one of the 36 pairs situated in the Hṛdayacakra, according to the 10th century Ḍākārṇava chapter 15. Accordingly, the hṛdayacakra refers to one of the four divisions of the sahaja-puṭa (‘innate layer’), situated within the padma (lotus) in the middle of the Herukamaṇḍala. The 36 pairs of Ḍākinīs [viz., Vajrapāṇī] and Vīras are reddish yellow in color; they each have one face and four arms; they hold a skull bowl, a skull staff, a small drum, and a knife.

Vajrapāṇi (वज्रपाणि) threw away the rock thrown at the Buddha with his thunderbolt (vajrakīla) according to the 2nd century Mahāprajñāpāramitāśāstra (chapter XXIV).—Accordingly, “Then Devadatta conceived a dire plan (duṣṭacitta): he pushed down a rock to crush the Buddha. But Kin kang li che (Vajrapāṇi) with his thunderbolt (vajrakīla) threw the rock far away. However, a rock splinter split off which wounded the Buddha’s toe”.

Vajrapāṇī (वज्रपाणी) refers to the fourth of the “eight Bodhisattvas” (aṣṭabodhisattva) as defined in the Dharma-saṃgraha (section 12). The Dharma-samgraha (Dharmasangraha) is an extensive glossary of Buddhist technical terms in Sanskrit (e.g., aṣṭa-bodhisattva and Vajrapāṇī). The work is attributed to Nagarguna who lived around the 2nd century A.D.

[«previous (V) next»] — Vajrapani in India history glossary
Source: academia.edu: The Yona or Yavana Kings of the time of the Legendary King Ashoka

Bodhisattva Nagarjuna Vajrapani was the founder of Mahayana Buddhism. He was also referred to as Padmapani, Padmasambhava, Samantabhadra etc. According to Gilgit Manuscripts, Vajrapani attained nirvana 400 years before King Kanishka. Samyuka-Ratna-Pitaka-Sutra of Chinese Suttapitaka records that King Kanishka flourished 700 years after Buddha nirvana. Thus, there was at least 300 years difference between the date of Buddha nirvana and the date of nirvana of Vajrapani

Vajrapāṇi (वज्रपाणि).—(in Sanskrit epithet of Indra; in Pali Vajirapāṇi is name of a yakkha, also of Indra, the two being identified, at least sometimes; on his character see Malalasekara (Dictionary of Pali Proper Names); in [Buddhist Hybrid Sanskrit] sometimes = Indra, as in Mahāvastu i.183.10 where his form is assumed by Buddha; probably also in Gaṇḍavyūha 250.20, where he parallels, and forms the climax of, a series of devatās; and probably Saddharmapuṇḍarīka 445.6), name of a yakṣa, Mahā-Māyūrī 3 (living at Rāja- gṛha); compare Vajra-rājagṛha; usually not, as in Mahā-Māyūrī, a mere local yakṣa, but a much more imposing and even terrifying yakṣa, who e.g. in Bodhisattvabhūmi 152.1 may be conjured up by a Bodhisattva to frighten evil-doers (compare also Caṇḍa- vajrapāṇi); often called by epithets like mahāyakṣa- senāpati Suvarṇabhāsottamasūtra 85.3, guhyakādhipati 91.17 (see the word, and compare Lalitavistara 66.6), yakṣendra 158.13; similarly (Ārya-)Mañjuśrīmūlakalpa 548.7, and often; elsewhere he is an important Bodhisattva, at or near the head of lists of them, Kāraṇḍavvūha 1.7; Mahāvyutpatti 649; one of eight, Dharmasaṃgraha 12; a special attendant on Buddha Laṅkāvatāra-sūtra 240.10; a Bodhisattva in the 8th bhūmi is Vajrapāṇi- satatānubaddha, Daśabhūmikasūtra 71.22; other references to V. the Bodhisattva, Śikṣāsamuccaya 274.3; Sādhanamālā 49.13 etc.; (Ārya-)Mañjuśrīmūlakalpa 11.6; 62.28; 68.20, etc.; it is clear, however, that for (Ārya-)Mañjuśrīmūlakalpa, at least, the Bodhisattva and the yakṣa or guhyaka prince are the same person; so Vajrapāṇir bodhisattvo 25.8 is referred to in 12 as (Ā)guhyakādhipatinā yak- ṣendreṇa; in addressing Vajrapāṇiṃ guhyakādhipatim, 36.2, he is called jinaputra (= bodhisattva) in the next line; he is called a bodhisattva in 145.2 and 13, and addressed as yakṣeśa in 14.

Vajrapāṇi (वज्रपाणि).—[adjective] having the thunderbolt in the hand (the same).

II. Being the assistant of the Buddha < [Part 3 - Acquiring precedence, etc.]

Appendix 5 - The body of the Dharma (dharmakāya) < [Chapter XXVI - Exertion]