Bodhi means something in Buddhism, Pali, Hinduism, Sanskrit, Jainism, Prakrit, the history of ancient India, biology. If you want to know the exact meaning, history, etymology or English translation of this term then check out the descriptions on this page. Add your comment or reference to a book if you want to contribute to this summary article. 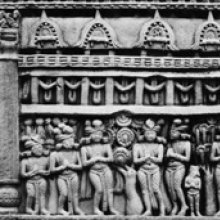 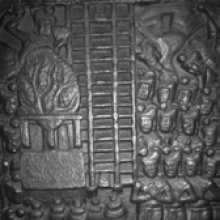 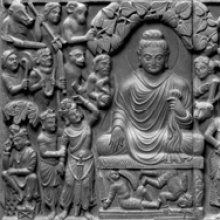 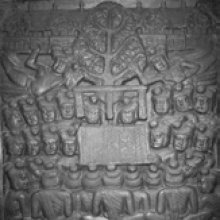 [«previous (B) next»] — Bodhi in Ayurveda glossary
Source: Shodhganga: Portrayal of Animal Kingdom (Tiryaks) in Epics An Analytical study

Bodhi (बोधि) (lit. “one who [awakens?]”) is a synonym (another name) for the Kukkuṭa, according to scientific texts such as the Mṛgapakṣiśāstra (Mriga-pakshi-shastra) or “the ancient Indian science of animals and birds” by Hamsadeva, containing the varieties and descriptions of the animals and birds seen in the Sanskrit Epics such as the Ramayana and Mahabharata.

Bodhi (बोधि) is the name of a Rāśi (zodiac sign) mentioned as attending the teachings in the 6th century Mañjuśrīmūlakalpa: one of the largest Kriyā Tantras devoted to Mañjuśrī (the Bodhisattva of wisdom) representing an encyclopedia of knowledge primarily concerned with ritualistic elements in Buddhism. The teachings in this text originate from Mañjuśrī and were taught to and by Buddha Śākyamuni in the presence of a large audience (including Bodhi).

Bodhi (बोधि) is the name of the tree (vṛkṣa) associated with Gahvara: the northern cremation ground (śmaśāna) according to the Vajravārāhī-sādhana by Umāpatideva as found in te 12th century Guhyasamayasādhanamālā. The tree associated with the north is sometimes given as Aśvattha. As a part of this sādhana, the practicioner is to visualize a suitable dwelling place for the goddess inside the circle of protection which takes the form of eight cremation grounds.

These trees (e.g., Bodhi) that are associated with the cremation grounds are often equated with the eight bodhi-trees of the Buddhas (the current buddha plus the seven previous one). According to the Śmaśānavidhi each tree has a secondary tree (upavṛkṣa) that is depicted as lovely and covered in vaṅga flowers and fruit. In each tree lives a naked rākṣasa who is wrathful in form, who eats human flesh and who has the animal face or the mount of the dikpati in his cremation ground.

Bodhi is the name of a daughter of Kassapa I. Cv.xxxix.11.

Bodhi (from verbal root budhi, “to awaken”, “to understand”):—awakenment, enlightenment, supreme knowledge. "(Through Bodhi) one awakens from the slumber or stupor (inflicted upon the mind) by the defilements (kilesa) and comprehends the Four Noble Truths (sacca)" (Com. to M. 10). [...] The enlightenment of a Buddha is called sammā-sambodhi, 'perfect enlightenment'. The faith (saddhā) of a lay follower of the Buddha is described as "he believes in the enlightenment of the Perfect One" (saddahati Tathāgatassa bodhim: M.53, A.III.2).

There is a threefold classification of enlightenment:

This 3-fold division, however, is of later origin, and in this form it neither occurs in the canonical texts nor in the older Sutta commentaries. The closest approximation to it is found in a verse sutta which is probably of a comparatively later period, the Treasure Store Sutta (Nidhikkanda Sutta) of the Khuddakapātha, where the following 3 terms are mentioned in stanza 15: sāvaka-pāramī, pacceka-bodhi, buddha-bhūmi (see Khp. Tr., pp. 247f.).

The commentaries (e.g. to M., Buddhavamsa, Cariyapitaka) generally give a 4-fold explanation of the word bodhi:

As to (2), the commentaries quote Cula-Nidesa where bodhi is defined as the knowledge relating to the 4 paths (of Stream-entry, etc.; catūsu maggesu ñāna). [...] Neither in the canonical texts nor in the old commentaries is it stated that a follower of the Buddha may choose between the three kinds of enlightenment and aspire either to become a Buddha, a Pacceka-Buddha, or an Arahat-disciple. This conception of a choice between three aspirations is, however, frequently found in present-day Theravāda countries, e.g. in Sri Lanka.

Bodhi (बोधि) according to the 2nd century Mahāprajñāpāramitāśāstra (chapter VII).—“Bodhi is the path of the Buddhas (buddhamārga); Sattva is either a being or a great mind. The Bodhisattva is the being who is going to obtain the mind, indestructible (aheya) and infrangible (acyuta) like a diamond mountain (vajra-parvata), of the qualities (guṇa) of the path of the Buddhas. Such is the great mind”.

Bodhi (बोधि) refers to “awakening”, according to the Gaganagañjaparipṛcchā: the eighth chapter of the Mahāsaṃnipāta (a collection of Mahāyāna Buddhist Sūtras).—Accordingly, “[...] The Bodhisattva Gaganagañja then sustained the jewel-canopy of ten thousand yojanas high over the Lord’s lion throne in the sky, joined the palms of his hands, saluted, and praised the Lord with these suitable verses: ‘[...] (11) You have practiced in order to seek awakening (bodhi) by the power and effort of vigour (vīryabala) during inconceivable (acintiya) hundred koṭis of kalpas (kalpa-koṭīśata). But you still attained awakening characterized by practice without effort, and that is how you have obtained the aim (artha) of practice. [...]”.

Bodhi  refers to a term used in both Sanskrit and Pali, meaning perfect wisdom or enlightenment.

Bodhi is both the Pali and Sanskrit word traditionally translated into English as "enlightenment." The word "buddha" means "one who has achieved bodhi." Bodhi is also frequently (and more accurately) translated as "awakening."

Bodhi is attained when the ten fetters that bind a human being to the wheel of samsara have been dissolved; when the Four Noble Truths have been fully understood and all volitional conditioning has reached cessation (nirodha), giving rise to transcendent peace (nibbana). At this moment, the psychological roots of all greed (lobha), aversion (dosa), delusion (moha), ignorance (avijja), craving (tanha) and ego centered consciousness (atta) are completely uprooted.

Bodhi is the ultimate goal of Buddhist life (brahmacarya). It is achieved by observing the eightfold path, the development of the paramitas (virtues) and profound wisdom into the dependently arisen nature of phenomena.

[«previous (B) next»] — Bodhi in Jainism glossary
Source: The University of Sydney: A study of the Twelve Reflections

1a) Bodhi (बोधि) (Cf. Sudurlabhatva) refers to “(the difficulty of attaining) enlightenment” and represents one of the twelve themes of contemplation (bhāvanā), according to the Jain Yogaśāstra (vol. 2, p. 839).—Accordingly, “Equanimity is attained through the state of non-attachment. In order to attain that [state of non-attachment], one should cultivate the twelve themes of contemplation: on impermanence, helplessness, the cycle of transmigration, solitude, the distinction [of the Self and the body], the impurity [of the body], the influx of karmic matter, the stopping [of karmic influx], the elimination of karmic matter, the correctly expounded law, the universe, and the [difficulty of attaining] enlightenment (bodhi-bhāvanā)”.

1b) Bodhi (बोधि) refers to “enlightenment” and represents one of the “(twelve) reflections” (bhāvanā), according to the 11th century Jñānārṇava, a treatise on Jain Yoga in roughly 2200 Sanskrit verses composed by Śubhacandra.—[...] The jewel of enlightenment (bodhi) is not easily obtained again for men in the ocean of life like a precious jewel that has fallen from the hand into a great ocean. In this world a whole multitude of objects, the supremacy that is desired by the chiefs of snakes, men and gods as well as family, power, prosperity, and wanton women, etc. are easily obtained. Conversely, the jewel of enlightenment alone is difficult to obtain.

Bodhi.—(LL), Buddhist; supreme knowledege attained by the Buddha; the tree of enlightenment; cf. mahābodhi, saṃbodhi. Note: bodhi is defined in the “Indian epigraphical glossary” as it can be found on ancient inscriptions commonly written in Sanskrit, Prakrit or Dravidian languages.

[«previous (B) next»] — Bodhi in Sanskrit glossary
Source: DDSA: The practical Sanskrit-English dictionary

2) The enlightened intellect of a Buddha.

5) An epithet of Buddha.

(-dhiḥ) 1. A branch of holy study; keeping the mind awake to the knowledge of the true God. 2. Intellect, understanding. 3. The holy fig-tree. E. budh to know, Unadi aff. in.

1) Bodhi (बोधि):—[from budh] mf. (with Buddhists or Jainas) perfect knowledge or wisdom (by which a man becomes a Buddha or Jina), the illuminated or enlightened intellect (of a B° or J°), [Kathāsaritsāgara; Rājataraṅgiṇī; Śatruṃjaya-māhātmya; Lalita-vistara] (cf. [Monier-Williams’ Buddhism 97, 188 etc.])

2) [v.s. ...] m. the tree of wisdom under which perfect w° is attained or under which a man becomes a Buddha, the sacred fig-tree, (Ficus Religiosa), [Hemādri’s Caturvarga-cintāmaṇi] ([Monier-Williams’ Buddhism 35, 181 etc.])

Bodhi (बोधि) in the Sanskrit language is related to the Prakrit word: Bohi.

2) [noun] the knowledge or wisdom got by Gautama, the founder of Buddhism, when he got enlightened.

3) [noun] the tree (Ficus religiosa of Moraceae family) under which Gautama was enlightend (in Gayā, in the present Bihār state).

Search found 115 books and stories containing Bodhi, Bodhī, Bōdhi; (plurals include: Bodhis, Bodhīs, Bōdhis). You can also click to the full overview containing English textual excerpts. Below are direct links for the most relevant articles:

II.d Attainment of the bodhis < [Part 8 - Predicting the fruits of ripening of various kinds of gifts]

III. Eminent knowledge of the Bodhisattva < [Part 3 - Outshining the knowledge of all the Śrāvakas and Pratyekabuddhas]

Chapter 19 - The Coming Of The Bodhi-tree

Chapter 18 - The Receiving Of The Great Bodhi-tree

Chapter 15 - The Acceptance Of The Mahavihara

Chapter 13 - The Offering Of Dharma