Bhavani means something in Hinduism, Sanskrit, the history of ancient India, Marathi, Jainism, Prakrit, Hindi. If you want to know the exact meaning, history, etymology or English translation of this term then check out the descriptions on this page. Add your comment or reference to a book if you want to contribute to this summary article. 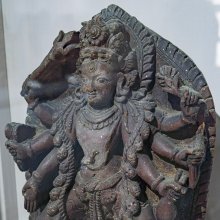 Bhavāni (भवानि, “the giver of existence”).—One of the names of the Goddess, Devī, who is regarded as the female principle of the divine; the embodiement of the energies of the Gods.

Bhavānī (भवानी) is an epithet of the Goddess (Devī), who incarnated as Satī, according to the Śivapurāṇa 2.2.14. Accordingly as Brahmā narrated to Nārada:—“[...] On seeing the mother of the universe born of Vīriṇī, Dakṣa joined his palms in reverence, paid respects to her and eulogised her. [...] O mother of the universe, those who eulogise Thee with the names of Bhavānī, Ambikā, Jaganmāyā and Durgā will have everything”.

Note: The Goddess has a great variety of names referable to her various forms, attributes and actions but these names are not always used accurately and distinctively. As the wife of God Śiva she is Bhavānī, as the mother of the world she is Ambikā or jaganmātā (the reading jaganmātā for Jaganmāyā is preferable). In her terrible form she is Durgā, the inaccessible.

Bhavānī (भवानी) is referred to as the “mother of the three worlds” in the Kathāsaritsāgara, chapter 1, written by Somadeva in the 11th-century. Bhavānī is described as becoming the daughter of Himavat (another form of Himālaya).

The Kathāsaritsāgara (‘ocean of streams of story’), mentioning Bhavānī, is a famous Sanskrit epic story revolving around prince Naravāhanadatta and his quest to become the emperor of the vidyādharas (celestial beings). The work is said to have been an adaptation of Guṇāḍhya’s Bṛhatkathā consisting of 100,000 verses, which in turn is part of a larger work containing 700,000 verses.

Bhavānī (भवानी) is the name of an important person (viz., an Ācārya or Kavi) mentioned in Rājaśekhara’s 10th-century Kāvyamīmāṃsā.—It is another name of Pārvatī, who was the creator of Sāhitya-VidyāVadhū.

Bhavāni is an archaeologically important site situated in Tirevallur-taluk (Chingleput district, Madras), known for inscriptions regarding the ancient history of India. For example, at Bhavāni there is an inscription in the Tamil language on the ceiling of the mahāmaṇḍapa in front of the central shrine, Saṅgameśvara temple. It states that Immaḍi Keṭṭi-mudaliyār constructed the precession-path round the shrine (tirunoḍaimāligai) the front nṛtya-maṇḍapa and the śikhara (pinnacle) of god Naṇṇāvuḍaiyasvāmin and also the central shrine, the ardhamaṇḍapa and the mahāmaṇḍapa of the goddess, Paṇṇārmoily-ammai.

[«previous (B) next»] — Bhavani in Marathi glossary
Source: DDSA: The Molesworth Marathi and English Dictionary

[«previous (B) next»] — Bhavani in Sanskrit glossary
Source: DDSA: The practical Sanskrit-English dictionary

1) Bhavānī (भवानी):—[from bhava] f. ([from] bhava; cf. iṅdrāṇī, rudraṇī, śarvāṇī and, [Pāṇini 4-1, 49]) Name of a goddess identified in later times with Pārvatī (she is the wife of Śiva in her pacific and amiable form; cf. [Religious Thought and Life in India 79]), [Gṛhya-sūtra and śrauta-sūtra; Harivaṃśa] etc.

[«previous (B) next»] — Bhavani in Hindi glossary
Source: DDSA: A practical Hindi-English dictionary