Bhakta means something in Buddhism, Pali, Hinduism, Sanskrit, Marathi, Hindi. If you want to know the exact meaning, history, etymology or English translation of this term then check out the descriptions on this page. Add your comment or reference to a book if you want to contribute to this summary article.

Alternative spellings of this word include Bhakt. 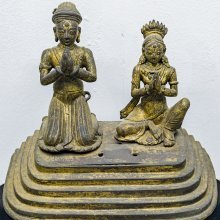 [«previous (B) next»] — Bhakta in Vastushastra glossary
Source: McGill: The architectural theory of the Mānasāra

Bhakta (भक्त, “devotee”).—According to the Mānasāra LIX, 1-2, “The characteristic features of all devotees (bhakta) are now stated in order. It is said that their division is four-fold; the measurement of each is ascertained in accordance to that division. Now, the first is said ta be sālokya, the second, sāmīpya, and the third should be sārūpya, and the fourth, sāyūjya; thus the four kinds.”

The names of the four classes evince a hierarchical grade of spiritual ascent or degrees in the state of union with the deity. Thus, sālokya, literally meaning “being in the world”, in this scheme connotes “inhabitation of the divine realm”; similarly, sāmīpya, is “being near the deity”, sārūpya, “assuming divine form or likeness”, and sāyūjya, “consummate union with the divine”.

[«previous (B) next»] — Bhakta in Vyakarana glossary
Source: Wikisource: A dictionary of Sanskrit grammar

Bhakta (भक्त) or Bhaktatantra refers to one of the twenty-three Vāmatantras, belonging to the Śāktāgama (or Śāktatantra) division of the Āgama tradition. The Śāktāgamas represent the wisdom imparted by Devī to Īśvara and convey the idea that the worship of Śakti is the means to attain liberation. According to the Pratiṣṭhālakṣaṇasamuccaya of Vairocana, the Śāktatantras are divided into to four parts, the Bhakta-tantra belonging to the Vāma class.

[«previous (B) next»] — Bhakta in Ayurveda glossary
Source: Shodhganga: Dietetics and culinary art in ancient and medieval India

Bhakta (भक्त) refers to “cooked rice” as described in the 17th century Bhojanakutūhala (dravyaguṇāguṇa-kathana), and is commonly found in literature dealing with the topics of dietetics and culinary art, also known as Pākaśāstra or Pākakalā.—According to Bhojanakutūhala, the cooked rice is prepared through the following steps. The rice grains should be washed at first. Then it should be cooked in water. The ratio between rice and water is 1:5. After cooking, the excess water is poured off. This preparation is called bhakta. This can be served as a dish which is termed as kevalānna in Bhojanakutūhala.

Cooked rice dishes are of six types based upon the different ingredients used along with rice. These, collectively called as ṣaḍvidhānna. They are:—

To describe this ṣaḍvidhānna the author quotes an Ayurvedic text namely Kriyāsāra.

Bhakta (भक्त):—Food or drinks consumed by the individual.

Bhakta (भक्त) means “divided”, according to Bhāskara’s Siddhāntaśiromaṇi (Golādhyāya, Yantrādhyāya, 8, pp. 366-367).—Accordingly, “A copper bowl, formed like a hemisphere, having a small hole at the bottom. The duration of a day and night divided [i.e., bhakta] by the number of immersions [of this bowl] gives the measure of the water clock”.

[«previous (B) next»] — Bhakta in Shaivism glossary
Source: SOAS University of London: Protective Rites in the Netra Tantra

Bhakta (भक्त) refers to “food”, according to the Svacchanda-tantra.—Accordingly, [verse 4.3-6, while describing the interpretation of dreams]—“In [auspicious] dreams [the dreamer] drinks wine, eats raw flesh, smears insect feces and sprinkles blood. He eats food of sour milk (dadhi-bhakta—bhakṣaṇaṃ dadhibhaktasya) and smears a white garment. [He holds] a white umbrella over his head, decorates [himself] with a white garland or ribbon. [He sees] a throne, chariot or vehicle, the flag of royal initiation. He decorates [these things] with a coral, betel leaf fruit. [He also] sees Śrī or Sarasvatī”.

Bhakta (भक्त) refers to “(having) distributed”, according to the Guru Mandala Worship (maṇḍalārcana) ritual often performed in combination with the Cakrasaṃvara Samādhi, which refers to the primary pūjā and sādhanā practice of Newah Mahāyāna-Vajrayāna Buddhists in Nepal.—Accordingly, “In front, above that, (arising from) the letter Yaṃ, is an air mandala, Above that, (arising from) the letter Raṃ, is a fire mandala, (and) above (that) a triangle marked red Ra, three shaved heads, and a lotus vessel, Behold the the five ambrosia and five lamps, distributed (bhakta), etc., therein, Arising from the letters Buṃ Āṃ Jiṃ Khaṃ Hūṃ Lāṃ Māṃ Pāṃ Tāṃ Vaṃ”.

[«previous (B) next»] — Bhakta in Mahayana glossary
Source: De Gruyter: A Buddhist Ritual Manual on Agriculture

Bhakta (भक्त) refers to “boiled rice” (suitable for an offering ritual), according to the Vajratuṇḍasamayakalparāja, an ancient Buddhist ritual manual on agriculture from the 5th-century (or earlier), containing various instructions for the Sangha to provide agriculture-related services to laypeople including rain-making, weather control and crop protection.—Accordingly, [As the Bhagavān said]: “Now I shall teach the offering manual which is auspicious and can bring about any effect. [...] Seven coiling figures should be made and rice spirals. Twenty-one figures should be prepared one after the other. Boiled rice (bhakta), milk rice, a dish of rice and peas, yoghurt and thickened milk should be placed. Fruits and flowers should be placed. Four jars should be placed. Preceded by a great offering barley-meal should be placed as foremost. [...]”.

[«previous (B) next»] — Bhakta in Marathi glossary
Source: DDSA: The Molesworth Marathi and English Dictionary

bhakta (भक्त).—c A worshipper of; one devoted to.

[«previous (B) next»] — Bhakta in Sanskrit glossary
Source: DDSA: The practical Sanskrit-English dictionary

4) Engaged in, attentive to.

7) Forming a part of, belonging to.

4) Any eatable grain boiled with water.

1) Regularly fed by another, a dependant, retainer.

4) Used in a secondary sense.

Bhakta (भक्त) in the Sanskrit language is related to the Prakrit words: Bhaia, Bhatta.

[«previous (B) next»] — Bhakta in Hindi glossary
Source: DDSA: A practical Hindi-English dictionary

1) [adjective] distributed in shares; given out a port or portions of; apportioned.

4) [adjective] occupied wholly with; absorbed in; engrossed in.

2) [noun] a man enthusiastic about a particular person, sport, pastime, etc.; a fan.

2) [adjective] relying on another for support or aid; dependent.

3) [adjective] of secondary importance; not important.

2) [noun] a thing that is relying on another for support, sustenance, etc.

3) [noun] (rhet.) a word or phrase used only in its secondary or unimportant sense.

Search found 85 books and stories containing Bhakta, Bhākta; (plurals include: Bhaktas, Bhāktas). You can also click to the full overview containing English textual excerpts. Below are direct links for the most relevant articles:

Verse 9.34 < [Chapter 9 - Rāja-guhya-yoga (Yoga through the most Confidential Knowledge)]

Verse 9.31 < [Chapter 9 - Rāja-guhya-yoga (Yoga through the most Confidential Knowledge)]

Verse 9.29 < [Chapter 9 - Rāja-guhya-yoga (Yoga through the most Confidential Knowledge)]

Verse 3.2.145 < [Chapter 2 - Description of the Lord’s Travel Through Bhuvaneśvara and Other Placesto Jagannātha Purī]

Chapter III, Section I, Adhikarana I < [Section I]