Amritaprabha means something in Buddhism, Pali, Hinduism, Sanskrit, Jainism, Prakrit. If you want to know the exact meaning, history, etymology or English translation of this term then check out the descriptions on this page. Add your comment or reference to a book if you want to contribute to this summary article.

The Sanskrit term Amṛtaprabha can be transliterated into English as Amrtaprabha or Amritaprabha, using the IAST transliteration scheme (?). 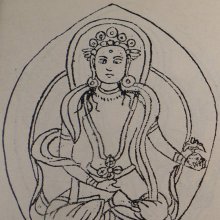 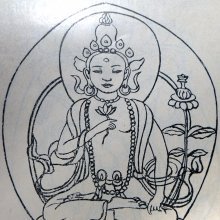 1) Amṛtaprabhā (अमृतप्रभा), daughter of Parvata, is one of the twelve female friends of Mahallikā: daughter of Prahlāda, according to the Kathāsaritsāgara, chapter 45. Accordingly, as Mahallikā said to Sūryaprabha: “... my female friends are not only two, but twelve in number, and my father’s brother carried them off from Indra’s heaven. The first is named Amṛtaprabhā, the second Keśinī; these are the auspiciously marked daughters of the hermit Parvata... They [eg., Amṛtaprabhā] are all heavenly nymphs, born from Apsarases, and when I was married they were taken to the first underworld, and I must bestow them on you, in order that I may be always with them”.

2) Amṛtaprabhā (अमृतप्रभा) is the name of a Vidyādhara, as mentioned in the Kathāsaritsāgara, chapter 107. Accordingly, as Amṛtaprabha said to prince Naravāhanadatta: “... I, Prince, am a king of the Vidyādharas named Amṛtaprabha, and I have been sent by Śiva on the present occasion to save your life. Here is the mountain of Kailāsa in front of you, the dwelling-place of that god; if you propitiate Śiva there, you will obtain unimpeded felicity. So, come, I will take you there”.

The Kathāsaritsāgara (‘ocean of streams of story’), mentioning Amṛtaprabhā, is a famous Sanskrit epic story revolving around prince Naravāhanadatta and his quest to become the emperor of the vidyādharas (celestial beings). The work is said to have been an adaptation of Guṇāḍhya’s Bṛhatkathā consisting of 100,000 verses, which in turn is part of a larger work containing 700,000 verses.

“Amṛtaprabha is white in colour. In his right hand he holds the jar of nectar on the crown of his head. His clenched left hand rests on the hip”.

“Amṛtaprabha also is one-faced and two-armed and sits in the Vajraparyaṅka attitude on a lotus. He holds the double Vajra on his lap with his right hand, and the lotus on a water-vessel in his left”.

The names of the 108 deities [viz., Amṛtaprabha] possbily originate from a Tantra included in the Kagyur which is named “the 108 names of Avalokiteshvara”, however it is not yet certain that this is the source for the Nepali descriptions.Source: Brill: Śaivism and the Tantric Traditions (tantric Buddhism)

[«previous (A) next»] — Amritaprabha in Jainism glossary
Source: archive.org: Trisastisalakapurusacaritra

Amṛtaprabhā (अमृतप्रभा) is the wife of Sukośala, son of Sahadevī and Kīrtidhara, according to the Jain Ramayana and chapter 7.4 [Rāma and Lakṣmaṇa] of Hemacandra’s 11th century Triṣaṣṭiśalākāpuruṣacaritra (“lives of the 63 illustrious persons”): a Sanskrit epic poem narrating the history and legends of sixty-three important persons in Jainism.

Part 6: Rāma’s parents < [Chapter IV - The, birth, marriage, and retreat to the forest of Rāma and Lakṣmaṇa]

Part 4: War between Kṛṣṇa and Jarāsandha < [Chapter VII - Marriages of Śāmba and Pradyumna]